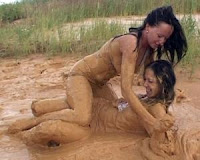 It didn't take long after Obama chose Sonia Sotomayor as his Supreme Court nominee before Newt Gingrich went to work doing the only thing he knows how to do with any real expertise -- throw mud.

Gingrich was joined in his attack on Sotomayor, calling her a "racist", ( we all know Gingrich was up nights in the 60's wondering what he could do to bring about racial equality) by Tom Tancredo, another former Republican congressmen and Rush Limbaugh.

The Republicans know that the news media are suckers for attacks and mud slinging no matter how specious and unjustifed (can anyone spell "impeachment"?) and mud is something the news media always loves to play in.

CNN as always took the bait on the "racist" charge, not because it has any credence but because CNN has been wanting to promote a "battle" for Sotomayor's confirmation from the beginning and this fit the bill. And CNN has been the mud pit ever since.

What seems to almost comically go over the heads of CNN and "the best political team on television" is what looks suspiciously like the Republicans playing "good cop,bad cop" since the mud slinging is coming from former Republican members of congress like Newt "I hate to be ignored" Gingrich and Rush Limpbaugh, ( no, not a typo), while current members act like they are shocked, shocked, that anyone would call Sotomayor racist. So Gingirch calls her a racist and McConnell says the language is over the top and he doesn't agree with it.

But it's pretty obvious that Gingrich, Limpaugh, and Tancredo have been sent out to do the dirty work in what looks like a coordinated attack, while Orin Hatch, Jeff Sessions and Mitch McConnell publicly throw up their hands and say "not me, I didn't say it", then hold their hands up to the camera to show everyone how clean they are.

Obama so far, has not done Sotomayor or Senate Democrats any favors either, doing what he does best -- ducking responsibility and controversy. His tepid attempts at defending Sotomayor took the form of suggesting that maybe Gingrich, Limpbaugh and Tancredo's attacks were understandable and if only poor inarticulate Sonia had just used better words like he does there wouldn't be this problem in the first place. In other words, the way Obama sees it, it's all Sotomayor's fault.

If CNN had any real journalistic standards they wouldn't have given so much air time to the attacks by Gingrich, Limpy and Tancredo in the first place. After all none of them have votes in any of this and in the end nothing they have to say matters. Except CNN was hoping for a "battle" over Sotomayor and Gingrich and Limpy threw them a bone and they took it. So CNN has been hosing down the mud pit every day making the mud easier to throw and roll around in and even at times getting in the mud pit themselves.

They had a hilarious sort of round table "discussion" between Tony Harris, Rick Sanchez and Dana Bash,trying to "analyze" Sotomayor's remarks which obviously the Republicans saw as an opening to start throwing the mud and make themselves heroes to the "angry white male" constituency they need to get anyone elected dog catcher.

But the more Harris, Sanchez and Bash spoke the more ridiculous it became with Sanchez going so far as saying, "well gee maybe she meant it as a joke". Sure, Rick. Atta boy.

Anyone who read her remarks in context knows there wasn't a shred of racism in them.If we had had the kind of "racism" that Sotomayor supposedly was representing in her remarks we never would have needed a civil rights movement.

She correctly pointed out that not until 1972 had the Supreme Court ever ruled in favor of a woman bringing a discrimination suit. Its hard to imagine that would have been the case had there been more women on the court who might have applied the 14th amendment a little more equally and a little more wisely.

Sotomayor's remarks needed no defending, but Obama gave credence to the accusations of "racist" by suggesting the fault was hers saying she should have stated it differently, and then Robert Gibbs in a press briefing talking about "her poor word choice".

Reports are that Sotomayor has had the small knife Obama put in her back successfully removed though it still hurts when she laughs. On the other hand it could take her a bit longer to wash off all the mud that Obama and CNN have allowed the Republicans to sling at her and in some ways have joined in and thrown themselves.


UPDATE: As of 9:56 a.m. eastern Newt Gingrich issued a statement backing off his original charge of "racist" against Sotomayor and taking it back, saying that calling her a racist was too strong. No thanks to Obama and his non-defense defense, who Gingrich in the same statement, pointed out had given some justification to his original remark by saying that Sotomayor had used a poor word choice.

Gingrich's statement now takes heat off of Senate Republicans who no longer have to deal with his remarks, while at the same time making a fool out of Obama who gave some justification to Gingrich's original accusation.
Posted by Marc Rubin at 4:54 AM

Yep - picture is a little "sexist" - but your post was funny.

Yikes Marc- where did you get that picture! Yes- a little racy indeed-
But point well taken- I cannot even stomach anyone on CNN except Lou DObbs anymore- they are practically as scandalous as an entertainment weekly- which purposely tries to be scandalous- CNN purports to be a newsworthy source???
And of course- with the contrived controversy that is in the atmosphere- where is Obama? Over in the middle east, sure that his proselytizing will bring about world peace.