WHAT IT MEANS WHEN DOCTORS AND NURSES ARE THROWN OUT OF A HEARING ON HEALTH CARE REFORM. 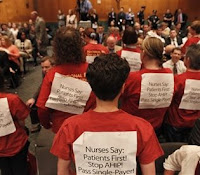 On May 12th a group of doctors and nurses were thrown out of a Senate hearing on health care reform when they got up to protest the hearings. What they were protesting was, that not a single witness before the committee was there to advocate universal single payer health care which is the only real kind of health care reform that matters and is the kind that is in place in most other western countries.
One doctor who was part of the protest and was ejected shouted "this is a sham!" while another shouted, "why isn't a single payer at the table"?

Single payer universal health care is the one that the majority of the American people want according to polls. It is the reform that the insurance companies and drug companies don't want. '

So what does it say about Obama and his approach to health care that, so far the Senate Finance committee has held three hearings on health care reform and to date there has not been one single witness advocating a single payer universal health system? Instead the only witnesses have been the health care industry,the drug companies and insurance companies, the same people who stood behind Obama when he announced his laughable and pathetic "breath through" by insurance companies to limit the amount of increase in their premiums by 1.5% a year. As I wrote when it happened, as a step towards health care reform it was more disappointing than the secret message from Little Orphan Annie to buy Ovaltine in A Christmas Story.

Chuck Idelson who represents the California Nurses Association who advocates a universal single payer government run system said, "Somehow the advocates for nurses and doctors have been shut out of the process. They're hearing from businesses, insurers and even the Heritage Foundation, but not from the people who actually provide health care to patients."

This is largely due to Obama and what has been his approach to health care which is why I had been writing that the way to get the kind of universal health care that is meaningful, is for each person to let their member of congress know what it is they want and insist on it.

The doctors and nurses who stood up in protest did so because the only witnesses being heard from were those who created the problem in the first place.

President Obama had made it clear that he didn't support universal health care which is the what most health care providers support and most Americans want. As I pointed out more than a month ago, Obama said in a town hall meeting that he would work with modifying the present system. He conceded the present system "is not the system we would want if we were starting from scratch but its the system we have and the one we will work with". This is change you can believe in?

The basic problem with health care in the United States is that health care costs are market driven and based on capitalistic principles which have no place in health care. Its as stupid a system as privatizing police and firefighting.

It all comes down to one simple idea -- when you have a system that doesn't make a distinction between a doctor of orthopedic surgery and Dr. Pepper you have a problem. And the insurance companies,hospitals and drug companies have turned health care into big business making healthy profits, not people, their first priority.

It is going to be up to individuals to let Obama and their own members of congress know that single payer universal health care is the system they insist on, not what Obama has been offering which is more snake oil than a real overhaul of the health care system.

Health care providers protesting Senate hearings on health care reform says more about Obama's approach than anything else. Most of them advocate a single payer universal system. Anything less is exactly what those protesting doctors say it is
-- a total sham.

When it comes to health care reform its time for people to do what they've always done -- take the advice of their doctors, not Obama's and not the Republicans. Health care should be more about healthy people than healthy profits.
Posted by Marc Rubin at 8:05 AM

Email ThisBlogThis!Share to TwitterShare to FacebookShare to Pinterest
Labels: what it means when doctors are thrown out of hearings on health care reform

I agree, political differences aside, it is pretty clear what most Americans want, and the point you bring up about not talking to doctors or nurses also speaks volumes, unfortunately to the wrong people.

Thank goodness you're still posting. You are a voice of sanity in an increasingly insane world. Thank you for courageously continuing to speak the truth about universal/single payer health care and so many other issues, all of which the BO administration seems bent on "handling" by means of universal corruption, ineptitude, outright tyranny and utter disdain for the American people.

A little confusing since all of the doctors I speak with do not agree with the single payer system...