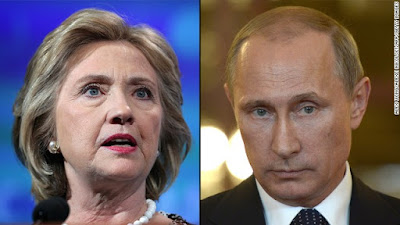 Back in February  I wrote a piece that generated over 100,000 hits in one day and was picked up and republished by other Democratic and liberal leaning web sites that generated additional hits (and hundreds of comments) when it became clear to me that the Clinton campaign and the DNC were trying to rig the nomination for Clinton with the full cooperation and collusion of mainstream media outlets like CNN, MSNBC, the AP,Washington Post, New York Times and others.

It was February 23,2016 before a single DNC email had been released and months before the Podesta emails were released that exposed Democrats, the DNC, Clinton campaign, Debby Wasserman-Schultz and most in the mainstream media as a vipers nest of lies, personal and political dishonesty, fraud, rigging, and trying to undermine our democratic principles and process, all the more ironic since that is what Democrats have been trying to laughably blame the Russians for doing by hacking into their emails and exposing the dishonesty and fraud.

Except it didnt take Russian intelligence to see the extent of the lying cheating and rigging that was going on within the Democratic party. Only basic intelligence.

This is being written a day before the Inauguration of Donald Trump something even I could have never envisioned last February.But before a single hacked DNC email was published by Wikileaks, or any of the Podestas emails, it was clear that the fix was in for Hillary Clinton. And that in the end it would never work. And I said so.

How dishonest are Democrats, or anyone for that matter,trying to claim the Russians wanted to elect Trump or that the emails had anything to do with Trump's election? All of the DNC emails exposing the lies,fraud,collusion and institutional dishonesty going on within the DNC,Clinton campaign, Democratic party and news media was, at the time, all to the benefit of Bernie Sanders, the candidate every poll showed beat Trump decisively head to head, some by as much as 15 points while head to head match ups with Clinton showed a much closer race of between 4 and 6 points with a 3 point margin of error. That the Russians hacked the DNC because they wanted Trump who was not even the nominee at the time and dismissed by almost everyone, is as preposterous as Democrats trying to rig the election themselves with the help of a patently dishonest news media and thinking they would get away with it.

But before Wikileaks released a single DNC email, I could see with my own eyes the fraud and rigging that was going on by the Clinton campaign, the DNC and news media in trying to do to Sanders what they eventually tried to do to Trump but failed.  It didnt take Russian intelligence to see it.

In recently re-reading the piece from almost a year ago,I had the urge to say to the DNC, the news media and everyone connected with the Clinton campaign," I told you so". All I had written last February, all I predicted if Clinton and the DNC insisted on continuing the dishonesty, the fraud and rigging and how she and the Democrats would lose in the general election including down ticket Democrats has come to pass.And so this is the "I told you so".

The emails eventually did offer documentary proof of  what I could see with my own eyes and knowledge of the system given my support of Hillary Clinton in 2008 as Executive Director of a PAC supporting Clinton's candidacy for the nomination, though this time around I was supporting Sanders.

Unfortunately for Democrats they not only havent learned the valuable lesson afforded them by losing the election, they continue to lie about it. To themselves and anyone dumb enough to listen. Which aside from suffering the losses I predicted both in terms of the presidency and down ticket Democrats, should have been a wake up call to reform the party and end the corruption and  the corrupt leadership that was evident even back in February and subsequently confirmed in the emails.

Instead the Democratic party establishment has decided otherwise, re-electing Pelosi, inventing empty and dishonest excuses for why they lost including the preposterous excuse of blaming Russia for hacking emails which resulted in exposing the truth as if to say, if people didnt know the truth we would have won.

So the dishonesty that cost them the election in the first place continues: Its everybody's fault but theirs. It's the Russians fault ( for hacking DNC and Clinton campaign emails that did nothing other than expose the truth) Its Wikileaks fault for publishing them, its Comey's fault, its the Electoral College's fault (the genius of which is apparent) it was the Founders fault for creating the Electoral College (complete with misquoting Hamilton), it was Sanders fault,Sanders voters fault who wouldn't vote for Clinton, everyone but those who deserve all the blame -- themselves, their dishonesty and the dishonest news media that backfired.

The original piece from almost a year ago is linked here. Its was worth my re-reading. Maybe others will think so too. Many of the predictions and warnings came to pass.Almost all of the observations of fraud were verified by the emails even though the piece largely dealt with super delegates and how Clinton, the DNC and news media were using them to fraudulently create the expectation that Clinton was the inevitable nominee and this after only 3 primaries which resulted in two ties and one landslide victory for Sanders in New Hampshire.

Which leads to another prediction: unless the Democratic party reforms in a major way -- that's reform, not re-tread, accepts the truth as to why they lost, knock off the dishonesty and arrogance when they have nothing to be arrogant about, and stop all the lying, they will lose again in 2018 and lose big. And keep losing until they decide that really, honesty is the best policy.And so far they are not convinced of that.

Posted by Marc Rubin at 4:07 AM No comments: