FOX NEWS LIES BUT SO DO THE OTHERS

As the war of words between Fox News and the Obama Administration continues, one thing becomes clear -- assertions that Fox News gives slanted and biased, even dishonest coverage, applies even to the way Fox News defends itself.
Fox has been asserting that since the Obama Administration has begun their attacks their ratings are up. It's an attempt by Fox News to imply that Obama's attacks against them for bias and dishonest reporting has backfired and has driven more people to watching Fox News. This matters because it goes to the heart of the of the problem. After all if Fox News cant or wont tell the truth about itself, why would anyone think they would tell the truth about the issues they report on?

The fact is Fox ratings were up last week but not as a result of Obama's firing back at the network. The evidence is they were up because of the balloon boy incident, and it's aftermath, carried live by Fox as it was by the other cable networks and attracted a large audience on all of the cable networks and is still a story that is attracting a lot of interest.

Fox has media people who know this. But it didn't stop the News division from trying to claim that it was Obama's attacks against the network that increased their ratings.

Brit Hume, who has his good moments and bad moments tried to come to Fox's defense by asking if the other cable networks felt good about getting "a pat on the head" from the Administration. His implication is that the press' role should be adversarial in their coverage of politics and that being embraced by the Obama Administration is nothing to be proud of. But it begs the question. Distorting the news and using a purported news organization to promote right wing propaganda is nothing to be proud of either. Media Matters reported that over a four day stretch from August 24th-28th Fox News aired 22 news clips opposing health care reform and none supporting it.

And it was laughably obvious that during the Bush administration and Republican control of congress Fox News did every bit as much to deserve "a pat on the head" from Bush and the Republicans as Hume is accusing the other two cable networks of doing for Obama. Fox was about as adversarial over Iraq, Bush's failures in the 911 attacks and the economy as a trained seal is adversarial to a fish.

The real problem though, is with the media as a whole. Rick Sanchez, a CNN anchor has been blistered for airing racist Rush Limbaugh quotes that turned out to be false. And he deserves to be blistered. Sanchez is one of the sloppiest journalists on the air and his pandering to what he sees as a "young audience", probably college students who can watch his show at 3 p.m. is almost embarrassing as he keeps using the word " cool" in almost everything he says.

CNN continues a brand of journalism where their anchors just cant stop inserting their own opinions into the news, wanting to be the news as much as reporting it and their opinions are invariably wrong about everything all the time. And no one can deny that MSNBC went from being in Bush's pocket to Obama's pocket as soon as the political winds changed, though to be fair, Keith Olbermann was the lone anti-Bush voice on MSNBC when it wasn't popular be to anti-Bush.

Obama's war with Fox News is a war worth fighting,since they are hardly an unbiased objective news organization and their slogan of fair and balanced is simply a lie. But the two other cable news networks aren't much better when it comes to objectivity . The difference is, especially in CNN's case, its not an ideology that they are constantly promoting, its themselves.
Posted by Marc Rubin at 6:35 AM 19 comments:

Email ThisBlogThis!Share to TwitterShare to FacebookShare to Pinterest
Labels: FOX NEWS LIES BUT SO DO THE OTHERS

THE AFGHAN WOMAN WHO DIDNT WIN THE NOBEL PEACE PRIZE

While controversy continues to swirl around the selection of President Obama as the winner of the Nobel Peace Prize, in Afghanistan, the next momentous decision facing Obama, the news is more about the Afghan woman who was nominated for the prize but didn't win.
Her name is Dr. Sima Samar and unlike the criticism of the prize being given to Obama for having not yet accomplished anything, Dr. Samar does have a long list of accomplishments and many in Afghanistan felt she should have been given the prize.

P.J. Tobia,a journalist writing from inside Afghanistan describes her as "incredibly courageous" .

Dr. Samar has spent most of the last ten years treating women and young girls in Pakistan and Afghanistan at considerable risk to her own life. She is now the chairwoman of the Afghan Independent Human Rights Commission and is the first woman to have received a medical degree from Kabul University which she obtained in 1982.

Dr. Samar fled Afghanistan during the war with the Soviet Union and returned in 2002 where she became, according to writer P.J. Tobia, Minister of Women's Affairs in the interim Karzai government.

Dr. Samar prominently and publicly opposed the Burka saying that it was a principle cause of bone disease in Afghan women because of it preventing sunlight on the skin. In a country that saw the Taliban throw acid in the faces of 8 year old girls simply for going to school in violation of Taliban law, simply being a woman and being a doctor put Dr. Samar at risk. But to be so outspoken on her opposition to the Burka, Dr. Samar knew that she was risking her life on a daily basis and yet continued with her work.

According to Tobia, Samar losing the prize to Obama was bigger news in Afghanistan than Obama winning it. And a bigger disappointment. And it takes on even greater poignancy and irony since the future of Afghanistan and the security threat represented by the Taliban is going to be decided by Obama in the very near future.
Posted by Marc Rubin at 6:45 AM 3 comments: 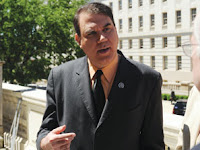 Rep.Alan Grayson gave everyone a needed anatomy lesson, on the state of health care, on Republican obstructionism and Democratic weakness.
Grayson's anatomy lesson to the Democrats reminded them of what it means to have what Madeline Albright once called "cojones" and what happens when you're willing to use them. He also pointed out another part of their anatomy that many Democrats seem to have forgotten about for the last 15 years - their backbone.

Republicans made a debate over the public option because they were able to intimidate Obama and the Democrats and for a short time were winning the PR war because Democrats didn't know how to fight back. Or wouldn't.

Republicans and their allies lied about almost everything relating to the health care bill and Obama had no answer.

Obama himself opened the door to the Republican obstructionism by making bi-partisanship a goal, something that politically was stupid beyond belief.And the Republicans took full advantage.

The public option should have been a no brainer from the start. In poll after poll 65-72% of Americans said they wanted it. And for good reason. The public option, as Max Baucus pointed out as he voted against it, would accomplish everything it was intended to do from insuring uninsured Americans to creating competition that will force down premiums.

For the 44,000 Americans who die every year because they don't have health insurance, the Republican obstructionism would be the kind of death sentence Republicans had dishonestly been accusing Democrats of implementing with the public option.

What Grayson gave the country and the news media was a much needed anatomy lesson in how to govern, how to make a point, how to stand up for what you believe is right, how to fight for it, and how to handle bullies. Which is smack them back and they stop. A teachable moment and anatomy lesson for everyone, not the least of which, hopefully was President Obama.
Posted by Marc Rubin at 4:06 PM 1 comment: