WARNING: OBAMA'S CONSTANT REVERSALS CAN BE HAZARDOUS TO YOUR HEALTHCARE REFORM 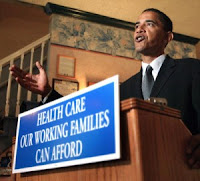 The answer to health care reform is simple. How to pay for it may be more complicated but what needs to be done isn't.
It's a government run single payer universal health care system which can stand side by side with current insurance plans for those who want to keep them.

Obama has lately come out in favor of such a single payer system side by side with private insurance, but it wasn't that long ago that he opposed it.

In a town hall meeting more than a month ago in response to a question about health care reform Obama said that "while the present system is not what we would want if we were starting from scratch it's the system we have and it's the system I will work with." Meaning he was more interested in making changes in the present system than initiating universal health care.

Now Obama seems to have reversed himself (so what else is new?) as polls show most Americans favor the universal single payer system. Certainly most doctors who aren't concerned with their own financial bottom line first, favor it.

But Obama still can't be trusted to follow through. Any change in the political wind can blow Obama along with it. But Congress can be trusted to do what the majority of Americans want them to do. The ball is really in their court anyway, and Obama is much more of a rubber stamp regarding health care since it's a bill that will come out of congress, and is something that has been on the Democratic Party agenda for 15 years. Whatever comes through Congress simply needs Obama's signature and it will get it.

The Republicans oppose a single payer system because it will put a big dent in the profits of insurance and drug companies. And they will be out in force with their usual brand of hollow and unsubstantiated scare tactics.
They have said that a public option is a deal breaker, but so what? Obama wants them on board for political cover but in reality they are not needed. And besides, they had 6 years controlling all branches of government and another two as a substantial minority and everything they did was a disaster. There is no need for bi-partisanship and the Republicans have shown they can't be trusted either to do what is in the best interests of the country.

This is what John Bohener said about a universal single payer system:

Actually I think the post office does a pretty good job so that isn't going to work for them. And any DMV is a state run agency so Bohener can't get his beaucracies straight. But this is the way Republicans think and who can blame them? They are so inept at running anything, their vision of anything run by the government is a disaster. But only if they run it.
By their reasonng you would think that NASA is just bumbling inept buracracy. I'm sure Boehner thinks the photographs from the Hubble telescope are just a mess.

How much Republican noise will influence Obama though, is hard to tell. But the way to insure a single payer system as an option is for people who support it to let their members of congress know.

There is an alternate plan being discussed called co-ops which would be privately run by its own members, like a food co-op, as a replacement for a single payer system. It is a bad idea and mostly cosmetic. It is designed more for the benefit of the insurance and drug companies and a compromise with Republicans and it should be rejected. In fact based on their track record, anything the Republicans like should be rejected until it's shown that what the Democrats do fails.

For now, people need to take matters into their own hands. They need to take everything Obama says with a grain of salt or aspirin, and most importantly, if they want real healthcare reform, call their member of congress in the morning.
Posted by Marc Rubin at 6:06 AM

Email ThisBlogThis!Share to TwitterShare to FacebookShare to Pinterest
Labels: Healthcare and Obama reversals