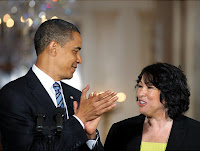 Newt Gingrich apologized for calling Sonia Sotomayor a racist because of remarks she made in 2001, which if read in context do not in any way display even a shred of racism. Gingrich's attack was ludicrous,even ridiculous and he backed off and essentially admitted as much by saying he made a poor choice of words.
But Gingrich succeeded in doing one thing. He made fools out of a lot of people. The first person he made a fool of was of course himself but his apology now takes him off the hook. The second was a group of people who go by the term of "journalist" who jumped all over Gingrich's remarks for the sake of controversey.

This was done relentlessly at CNN who discussed, analyzed, reported, and got constant reactions to Gingrich's remarks pretending they were anything but ludicrous and empty. And they did it because it suited their purposes to stir controversy over Sotomayor. Now of course with Gingrich admitting he went overboard CNN is left with egg on all their faces for giving credence to the ridiculous accusation in the first place although CNN didn't miss a beat talking about Gingrich's apology as if they knew all along his accusation was nonsense.

But the person Gingrich made a fool of the most was Barrack Obama, who when faced with having to defend his court nominee in the face of an empty, vicious, uncalled for, ludicrous and dishonest charge of being a racist, essentially caved in and gave credibility to the attack by saying Sotomayor had used a poor choice of words in her 2001 speech. In other words, it was her fault.

Now, in admitting he went overboard with his attack and that it was uncalled for and retracting it, Gingrich has shown up Obama as someone who just folded in the face of the most empty kind of political pressure and who virtually defended Gingrich's over the top attack by placing the blame on Sotomayor and her "poor word choice" in 2001.

So while Gingrich has now apologized and retracted his remarks, now its Obama's turn. He should stand up and publicly apologize to Sotomayor for being so spineless in the wake of the attacks made by Gingrich, Limbaugh and Tancredo and he should tell her "as clearly as he can", that he hopes she will display more courage as an Associate Justice of the Supreme Court than he did in defending her nomination against a ridiculous Republican attack.
Posted by Marc Rubin at 6:43 AM

I believe this Sotomayor controversy is just a distraction from the fact that North Korea fired 6 nukes in the short span of a week and no one in Washington D.C. seems to care about it. Mr. Obama is more concerned with going over to countries that hate us and want our destruction and saying "play nice boys and girls". The White House will continue to use the Sotomayor distraction all summer and dredge up and play the race card as often as they can which is something they seem to be successful at.

It may be a distraction Susan but I really believe this is more a result of Obama's lack of conviction- in addition this is an example of inexperienced administration- it really looks like a banana republic they are running.
And let's not forget- Obama is great at pretending not to play the race card when in fact he is playing the race card.
So what is going on? Gingrich apologizes? Cheney supports gay marriage? And Obama's stance on both?
Enough said

You make an excellent point. Why *did* Obama "admit" that Judge Sotomayor has revealed herself to be a racist?

One has to wonder if he really believe it. Or if he is just that confused about the nature of racism.