The Trump Hypocrisy Over Planned Parenthood. 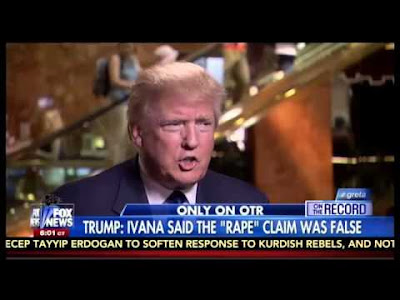 It was less than two weeks ago that Donald Trump was full of outrage and justifiable anger at a phony story by the Daily Beast about fake rape allegations from 30 years ago surrounding Trump's divorce from wife Ivana.

The story was typical of cheap shot phony journalism by equally cheap journalists looking to create some buzz and Trump was irate that a news organization would try to make an issue out of  a story that was false.

But false stories are fine for Donald Trump if he thinks he can use it to pander to conservatives he wants to help his presidential ambitions.

Trump, whose nose was all bent out of shape over the false Daily Beast story about rape allegations, has had no qualms about trying to exploit the equally phony stories and manipulated video surrounding Planned Parenthood and fetal tissue. He's dishonestly exploiting the video and phony allegations in exactly the same way he complained  about the Daily Beast dishonestly exploiting the rape story. So  for Trump it's do as I say not as I do.

Trump says he supports a government
shut down to defund Planned Parenthood based on the fake claim of Planned Parenthood illegally  selling fetal tissue.  Despite  the fact that Planned Parenthood said the story and allegations were completely false and  based on a dishonestly edited video designed to make one thing look like another. But Trump, turning Daily Beast-like issued his statements as if it were  all fact, announcing that if he were president he'd defund Planned Parenthood, which, by the way does not get one penny in federal funding for abortion and never has. So what they really want to shut down is breast cancer screenings, STD prevention and treatment, gynecological examinations for poor women who have no medical insurance and a host of other women's health issues,screenings and treatment that Planned Parenthood provides. That and that alone is what Republicans want to defund and shut down because that and that alone are the services the federal funding provides.

For the record, fetal tissue has been legally used in scientific and medical research since the 1930's. And yes there are ethics and laws involved. First, in every case Planned Parenthood gets the written consent of the woman, which complies with ethics and laws.  And secondly, what is illegal is selling fetal tissue for profit, not the selling of it for medical and scientific research and that is what Planned Parenthood and many other outlets have done and what has been going on for decades. There is no profit involved.

So for right wing politicians to seize on something that has been going on for decades and that everyone in the medical profession has known about for decades and suddenly try to make it a moral issue is just cheap political opportunism and grandstanding designed to appeal to the ignorant.  Just like Louisiana governor and pillar of selective morality Bobby Jindal who announced today he is cutting off state Medicaid funding to Planned Parenthood, something a federal judge will reverse as illegal as soon as it's challenged.

What the videos causing all the ruckus supposedly showed was  Planned Parenthood illegally arranging to sell the tissue for profit. They did not. And when that is proved, no doubt political exploiters will say that doesn't really matter, let's defund Planned Parenthood anyway even if they did nothing illegal and use it as fodder for the right wing crazies who think their ideas about everything is what people should be forced to follow.

Democrats must be salivating at Trump's big lead in the polls and his obvious hypocrisy and very selective and fluid set of principles and how what applies to him in terms of fairness and truth  doesn't apply to anyone else, in this case Planned Parenthood.

Democrats must also be salivating at Trump's position on shutting down the government to defund Planned Parenthood since it might force every other GOP candidate wooing the lunatic right to adopt the same stance, something that would assure any GOP presidential candidate of being, well, trumped,  by any Democratic candidate.

The only caveat is we are talking about Democrats who can boast the political wisdom and power of a daffodil, and who can claim the weakest most mealy mouthed ineffective collection of political strategists on the planet, so whether they will know how to use it to their advantage is still an open question.

Meanwhile Planned Parenthood could and should put The Center for Medical Progress,a phony right wing group who financed and planned the phony undercover video, out of business with a major defamation lawsuit. Two judges in California have already blocked the group from releasing more illegal video and secret recordings they made at meetings they attended using false identities, and blocked them from releasing a list of Planned Parenthood executives, the purpose of which clearly is to instigate violence against them from the right wing crazies they hope to inspire, the same group Trump is now courting.

Any violation of the court order will see principals at the Center For Medical Progress go to jail. But a civil suit is what put the KKK out of business and forced them into bankruptcy resulting in all their property being seized. It effectively destroyed them forever as an organization just like income tax evasion sent Al Capone to prison.

Planned Parenthood should do the same with the Center For Medical Progress which will be a lesson to anyone else trying to use doctored videos to make a political point. A lesson already learned by James O'Keefe whose doctored and  dishonest undercover video at an Acorn office successfully resulted in Acorn being wrongly defunded by Republicans looking for an excuse to do it anyway.   But it also resulted in O'Keefe having to pay $160,000 to the Acorn worker shown in the video in an out of court defamation settlement, since the video was dishonestly edited to depict the worker breaking the law  by helping a pimp and prostitute ( played by O'Keefe and his girlfriend ) lie on an application when the Acorn worker was actually doing the opposite and calling the police.

We haven't heard from O'Keefe since.  Probably because if he tried to pull the same thing a second time the punitive damages would be astronomical, more than his backers would ever be willing to pay and more than O'Keefe could pay himself which seems to have effectively put him out of the scam business. Planned Parenthood should do the same with the Center For Medical Progress which should be renamed The Center For Political Malpractice.

As for Trump, his call to shut down the government to defund Planned Parenthood should be a goldmine for any Democrat with a minimum of political intelligence pointing out Trump's gross hypocrisy and double standards which, if he ever did get the Republican nomination, could finish him in a general election. Which has Republicans on track to lose in 2016  no matter who the Democratic candidate is, Clinton or Sanders.

Though admittedly a lot will depend on whether Democrats reject the incredibly incompetent, capitulating and dangerous deal with Iran. Which could backfire on them politically before the deal backfires on everyone else. But not before Trump's own hypocrisy backfires on , not only him, but every other Republican candidate running  for president.