In Republican debate Carly Fiorina calls for the end of the Republican party as we know it. 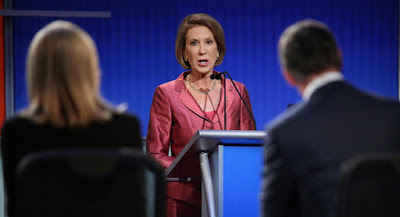 Carly Fiorina, who many think made the best impression during the Republican presidential debates seems to have called for the end of the Republican party and its primary ideology.

She was talking about Donald Trump but she talked about Trump within the context of principle and it's principle that counts since it's one's principles that apply to any and all situations and cannot be used selectively.  Which is what makes it a principle and not an opinion. In fact  you cant even claim you have principles if the principle you express applies only to one person at one time or one situation but not another.
And  so of Donald Trump Fiorino said expressing what is supposedly one of her guiding principles :
" Anyone who claims to represent the Republican party should never in tone be judgmental, vitriolic or angry".
Say goodbye to the Tea Party if Fiorina has anything to say about it. Or at least her rejection of their rhetoric and behavior. The same with those NRA and anti-healthcare reform Republicans like those who applauded during a 2012 Republican presidential debate at the idea of a person with no health insurance just being allowed to die (admittedly Obamacare is a massive fraud, failure and disaster but the idea of real healthcare reform like the public option isn't).
So based on this principle Fiorina seems to signal her support for either the end of the Republican party as we know it along with their guiding political ideology as currently comprised since its all about being judgemental, vitriolic and angry,  or at the very least 90% of the people in it.  Like Ted Cruz, Chris Cristie, Bobby Jindal, Sam Brownback the governor of Kansas, Scott  Walker, and most Tea Party House Republicans and their supporters all of whom are, if nothing else,  judgemental vitriolic and angry. Unless her primary guiding principles is not to have any guiding principles at all that apply outside of a Republican debate.
Posted by Marc Rubin at 9:27 AM