Secret Iran Deal Allows Iran to Inspect Itself. Or, Why is This Man Smiling? 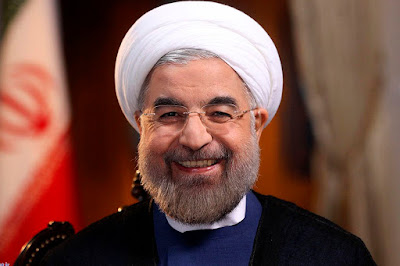 An Iran deal absurd to begin with and supported by only the most partisan of Obama sycophants or people who have chosen to believe the misrepresentations put out in support of the deal just got  a lot more absurd to the point of satire when the AP was able to obtain the secret agreement alluded to by John Kerry in his appearance before two congressional committees in his defense of the overall deal . This secret agreement labeled "separate arrangement II (indicating there is a part I)  a copy of which was obtained by the AP and which is part of the overall deal with Iran, unbelievably allows Iran to inspect itself for a site Iran wants off limits to IAEA inspectors.

According to the "separate arrangement II" document, Iran will be allowed to use its own inspectors to investigate a site it was accused of using once before to develop nuclear arms.


The specific site in question is the Parchin nuclear site which Iran had long  been suspected of using to develop nuclear weapons. Iran had also been accused of using the site to experiment with explosive triggers used to detonate nuclear weapons and was exposed in 2003 of having done so.

From the Associated  Press:

" The agreement diverges from normal procedures by allowing Tehran to employ its own experts and equipment in the search for evidence of activities it has consistently denied, trying to develop nuclear weapons".
If that is the most robust inspection deal ever peacefully negotiated then it would be assumed that those that came before also allowed those subject to inspection to inspect themselves which is clearly not true as the AP and IQ's in 3 digits already figured out.

The AP  also quotes from Olli Heinonen, a former IAEA Deputy Director General, referred to here previously, who said he could not think of any other similar concession ever made to another country. So the White House is right in one respect -- the inspection deal is unprecedented. But not in the way Obama has presented. Heinonen also destroyed  one of Fareed Zakaia's arguments in support of the deal when Zakaria quoted a former IAEA inspector who claimed the insufficient  inspection argument was a straw man. Heinonen, who says otherwise was much further up the chain of command at IAEA as an IAEA Deputy Director General.

But it also exposes more untruths, or to be blunt, more lies and misrepresentations by Obama who has, as the AP reports, "repeatedly denied claims of a secret deal favorable to Tehran".

Parchin is infamous in that Iran had refused to allow access by inspectors for years and is a site both the US and Israeli intelligence believe has been used to work on nuclear weapons and to develop high explosive triggers for a nuclear weapon. Iran has called the U.S. and Israel liars.

One of the major criticisms of the Iran deal even before this revelation was that the deal denying inspectors the right to inspect undeclared sites would make it difficult to impossible to reveal attempts at developing high explosive triggers since no uranium enrichment is involved.  In other words they could develop nuclear triggers in Rouhani's basement and the IAEA based on the deal, legitimately be refused access.

Parchin also happens to be the site where satellite imagery revealed Iran had used bulldozers and other equipment to sanitize the site ten years ago. Yet this is the site the secret deal allows Iran to inspect itself with it's own inspectors and equipment.(It should also be noted that ten years is when this deal expires which will then allow Iran unfettered ability to pursue uranium enrichment to weapons grade.)

According to the AP, the draft agreement they obtained shows the proposed signatory is Ali Hoseini Tash, Deputy Secretary for the Supreme National Security Council for Strategic Affairs. The AP states that this "reflects the significance Tehran attaches to the deal." It might also add that the appropriately named Hoseini negotiated an agreement in which the U.S. has been hosed.

The AP says Iranian diplomats in Vienna were "unavailable for comment". But Nancy Pelosi, who led Democrats over a cliff in the 2010 elections by going along with Obama's sellout to the health insurance lobby by dropping the public option was available.  She said she still supports the deal. Which should be enough to make Democrats shudder.
Posted by Marc Rubin at 8:02 AM