Destroying Fareed Zakaria's Arguments in Favor of the Iran Deal. 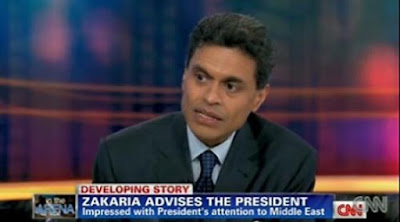 Fareed Zakaria has long been an almost blind supporter of president Obama from the beginning and as the above banner shows, was "impressed with the president's attention to the middle east" which could probably be best characterized as being closer to ADHD than actual attention since his relationship with Netanyahu is non-existent, he's been a failure in Israeli-Palestinian negotiations from the start since neither side trusts him and the Saudis arent too happy with him either. Add to that Obama's massive policy mistakes and failures in Yemen, Syria and with Isis, and its probably wise to consider anything Zakaria says in favor of an Obama policy as suspect.

In addition, Zakaria recently hosted a CNN special called "Blindsided: How Isis took the world by surprise". Which isnt exactly true since its public knowledge that Hillary Clinton as Secretary of State, Defense Secretaries Robert Gates, Leon Panetta and Chuck Hagel and Panetta again as CIA Director all implored Obama years ago to arm the moderate Syrian rebels to stop Isis in its tracks as it was being formed  in Syria. Obama famously replied  that Isis was "the junior varsity"  and didn't think they were worth paying attention to. So much for Obama's attention.


On Sunday,  on his CNN show, in an open appeal to Democratic Senator Chuck Schumer who has said he opposes the Iran deal and will vote against it, Zakaria, a generally intelligent and thoughtful man even if curiously enamored with Obama, made one of the most illogical and easily refutable arguments in support of the Iran deal this side of MoveOn and the Tea Party Left and their bizarre emails ( the latest of which is their dishonest and juvenile "60DaystoStopaWar" which is so full of lies and absurd thinking it puts them on the same level as climate change deniers) And in Zakaria's appeal in asking Schumer to change his mind, something the Tea Party Left will seize on since Schumer is their biggest  target for having the audacity to think for himself  and oppose both the deal and their Tea Party style groupthink, Zakaria laid out his arguments supporting Obama's Iran deal and against the arguments made by Schumer.


If you knew nothing about the issues involved it would be possible to draw a conclusion simply based on the quality of the arguments on each side.  Because  the more the Iran deal is looked at and logic and common sense is applied it's clear  there is no quality of argument in support of the deal since every argument  and point can be refuted factually which is why the best Kerry and Obama and those who support the deal can offer is,"what's the alternative"? And Obama's schoolyard name calling of those who oppose the deal as being the same people who got us into the war in Iraq ( like Joe Biden and John Kerry who both voted for the Iraq war?) makes Obama and his arguments look even more stupid and more suspect.

Instead of arguments and facts in support of the deal those are the kinds of overheated misrepresentations of the truth and facts, speculative suppositions, unsupported positions and opinions unsupported by facts and of course, outright lying, that is offered as a defense, the biggest lie of all being the lie parroted and used by MoveOn, DFA and others on the Tea Party Left which is either it's this deal or WAR!

The war argument is not only blatantly false it's stupid, illogical and an intentional empty attempt at  fear mongering designed to appeal to people who cant or wont think, which is exactly how the Tea Party on the Right tries to make an argument.

But once the illogical war argument is put aside, the deal itself  and the pros and cons can be seen with a lot more clarity in terms of reality and  the real choices that were possible once you get past the war  smoke screen.

There also isn't any kind of long term substantial "history" regarding sanctions  though they have obviously been used, most effectively and  ironically, against Iran and most ineffectively against North Korea, and Putin in his annexation of Crimea and invasion of eastern Ukraine.  So to  defend one of the main safeguards of the deal based on a provision and argument which is completely untested and could fall apart as " the most extensive and wide reaching in history",  when it's a  history that doesn't really exist, invalidates that argument and relegates it to speculative opinion. On the other side of the ledger the consequences of Iran being caught cheating and having snap back provisions which could fail or that Iran could ignore having already received tens of billions in relief and which would result in Iran getting a nuclear bomb is a preposterous trade off. You don't have to live in a unicorn fantasy world to think there could be a better way to guarantee Iran's compliance so that snap backs wouldnt even be necessary.

Secondly, on the  part of the deal that lifts the weapons embargo against Iran which even Obama admits will surely be used to arm terrorists around the world, Zakaria says, " this is true, but...".

Their should be no "but's".  If it's true, and it is, giving Iran more weapons they will surely use to arm terrorists around the world is not just unacceptable, it's stupid and wasn't necessary. Iran insisted on the lifting of the arms embargo at the last minute, threatened to walk away without it and Obama caved in. Giving Iran those weapons is going to kill people, and people who are U.S. allies. In addition the Iranian demand that the deal also include an end to the ban on having ICBMs which Zakaria could not defend is Cuckoo's Nest negotiating. This deal is supposed to be about preventing Iran from having a nuclear weapon (which at best it does for 10 years) not giving Iran the means to deliver it, and the only purpose of having ICBM's is to deliver a nuclear warhead.

There was a third argument Zakaria made about inspections which also fell apart. He quoted a former weapons inspector as saying that finding fault with the 24 day delay for inspecting an undeclared site is a straw man. He says it would only matter if the IAEA caught Iran "red handed"  blatantly cheating and in his words, "then the game would be over anyway".(another former weapons inspector writing in Foreign Policy opposing the deal completely disagreed).

What he doesn't say is 1) Iran has proved they are adept at cheating and if they want to they will and 2)  the probability that they would be caught "red handed" without inspecting a suspicious site is virtually non-existent, and  3), if they were caught "red handed"  without an inspection there wouldn't be a need to inspect the site would there? The IAEA would already have the proof. Since the deal calls for the IAEA to already have proof in catching Iran "red handed" before they can even start the 24 day process to inspect an undeclared site its a Catch-22 because the IAEA "suspecting" a site isn't good enough to gain immediate access and if they had proof they wouldn't need to inspect the site. So the IAEA needs proof,  catching Iran "red handed"  before they can demand access to an undeclared site which then gives Iran 24 days to clean up the site and claim the "proof" never existed even though if the IAEA had proof there would be no need to inspect the site. Good luck snapping back sanctions on that one. Which makes the deal surrounding the inspections to use another literary analogy,  Alice in Wonderland. Or a unicorn fantasy world. It's not hard to understand why Iran readily agreed to those terms. And why Iran's top military chief supports the deal.

Zakaria's final argument was the most ludicrous of all, which is that without this deal Iran will continue its enrichment and get a nuclear weapons.  It's a ludicrous argument  because for years Iran has claimed they have no interest in a nuclear weapon and never have and were only enriching uranium to 2% for energy and medical isotopes and this whole sanction thing was just a big misunderstanding. Their complaint has been "you have us all wrong". Even though the only reason for their heavy water reactor was to enrich uranium to 20% which is weapons grade.

In defending the reason for accepting the deal Zakaria is admitting that Iran's leadership are and have been lying in the past and that they were in fact trying to enrich uranium to weapons levels all this time while lying to the rest of the world. We knew about their enrichment program  which was set back by Israeli and U.S. intelligence and counter espionage that created the Suxtnet worm which crippled Iran's reactors for a time (and without war).

In admitting that Iran lies (they were also caught cheating in 2003 trying to develop triggers for a nuclear warhead) and cannot be trusted, Zakaria makes the case, not for this deal and not for war, Iran does not want war, they want the sanctions lifted, but for a much better more effective deal, a much stronger one that allows for real inspections, no ICBM's for Iran, no lifting of the arms embargo and a deal that will not let Iran enrich uranium to weapons grade in 10 years or ever. A deal that will actually accomplish what a deal to ensure Iran doesn't get a nuclear weapon is supposed to accomplish with an adversary that can't be trusted.

Obama has repeatedly said he hasnt heard anyone come up with anything better.  A lot of people havè including what was outlined above. Which makes him sound like a used car dealer trying to close a deal on a lemon. Which also exposes his negotiating skills. And, as we've seen before, his honesty.