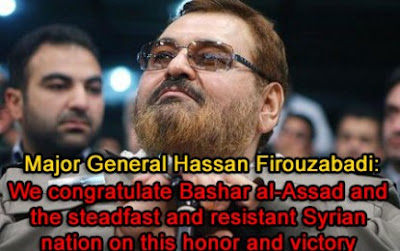 Obama may have lost number 3 Democrat in the senate Chuck Schumer who will vote against the Iran deal  along with a number of other Democrats but he picked up a big endorsement on Sunday in support of his deal, this one from Chief of Staff of the Iranian Armed Forces Major General Hassan  Firouzabadi who told Iran's citizens and Iran's official news outlet that the deal  is just great for Iran and agrees with John Kerry that it couldn't be better.

(Just for context the above visual was Firouzabadi congratulating Syrian president Assad for "humiliating the United States".)

Firouszabadi didn't quite say that anyone who thinks Iran could have gotten a better deal  was living in a unicorn fantasy world, but sounding like an old 1950's rock ballad, said there were 16 reasons why the deal was great for Iran and Iran's military. And why wouldn't he?

out of the water which Tea Party Left groups like MoveOn mimic like trained parrots, which is that those who oppose the deal in the U.S. are in common cause with Iran's hardliners. Based on facts and reality, there is more evidence that its those who endorse the deal in the U.S.who  have" common cause" to use Obama's term,  with the hardliners in Iran and those chanting "Death to America" since General Firouszabadi is one of those. And he is delighted with the deal.

It is clear from the facts that like it or not the proponents and supporters of the deal in the U.S. are more aligned with the Iranian military who are as hardline as it gets,  than those who oppose the deal.

Obama's childish and dishonest attempt at casting those who oppose his deal as having"common cause" with the Iranian hardliners, like almost everything else Obama says, or has ever said, ends up being the opposite of what always proves true. Something Glen Greenwald  pointed out (and has been pointed out here constantly ever since Obama started running for president)  in Greenwald's recent piece on Obama's dishonesty and failures on Guantanamo and Democratic sycophants politically trying to cover it up.

Yet when it comes to Iran there is something on which everyone seems to agree.  Everyone with the possible exception of Tea Party Left groups like MoveOn and Daily Kos and ThinkProgress who by their own logic of calling opponents of the deal "pro Iran war", have been hoisted on their own petard as being pro-Iranian nuclear bomb and pro-terrorist. But the common cause everyone else in the U.S. shares from the most far right Republican to Bernie Sanders, is that Iran cannot be allowed to have a nuclear weapon. Under any circumstances. Ever.

Obama's deal, far from exhausting every diplomatic effort to prevent Iran from having a bomb, is mostly Obama concessions that never should have been made in the first place and Obama himself has already conceded the deal will allow Iran to have a bomb in 10-15 years. Which would certainly lead to war.

But for now, unless Iran wanted war there would be no war.  Which is why the Iranian military chief is so pleased. And why MoveOn, ThinkProgress and DFA have become like Tea Party Left issuing, like the Tea Party on the right and their false propaganda, a torrent of blatant and even juvenile lies along with empty threats to prop up Obama.

Obama's deal gives Iran everything it wants and everything it needs to continue doing what it's been doing all along while giving Iran the capacity to have  a nuclear weapon in 10-15 years. They have given up virtually nothing except agreeing to inspections of previously declared sites. Iran is willing to wait those 10 years and will probably do secret research on triggers for a nuclear weapon which the IAEA couldn't discover (which happened in 2003) because there is no nuclear enrichment involved.

As for now Iran can't afford a war  and can't win one and therein is the lie, the ignorance and feeble scare tactics  coming from Tea Party Left groups who seem to have "common cause" with Iran's top military commander while influencing no one that matters despite their own self delusion to the contrary.

The only way Iran can ever threaten a war is if they had a nuclear bomb. That's because it takes two to make a war and Iran can't win a war. And will not now start one or engage in one with the U.S.  or Israel. And Firouzabadi knows that too. So it's not Obama's deal or war.   But by Obamas own admission his deal reduces the breakout time for Iran to get a nuclear bomb from three years at present to 3 months at the end of 10 years.

Obama said of his deal that Iran "is allowed to continue research and development into advanced centrifuges over the life of the deal and will be allowed to install those advanced models at Natanz after 10 years."  After 15 years all limits on the number and efficiency of those centrifuges expire  and that reduces the time it would take for Iran to build a nuclear bomb to 3 months.

Obama's deal , which General Firouszabadi is so happy with, also ends the ban on Iran having ICBM's whose sole purpose is to deliver a nuclear warhead. Add to that Iran's last minute demand and Obama's capitulation that the arms embargo be ended and its no wonder Firouszabadi is delighted. Which is why Obama's deal borders on the farcical and should be called Dr. Strangedeal: Or How Obama Learned to Stop Worrying and Love Iran's Bomb.

The lies and propaganda and Obama sycophancy of MoveOn's leadership like Jo Comerford and Anna Galland aside, there would be no war, not now not in the near future, if this deal is rejected.  Which would give the U.S. plenty of time to negotiate a deal that does not, according to Obama, give them the ability to have a nuclear weapon and the ICBMs to deliver it in 10-15 years. Or the ability to give weapons to terrorists around the world which ending the arms embargo will enable, something even Obama concedes.

So there will be no war as a result of rejecting the deal. Because the bottom line is, Iran wants the sanctions lifted not war. And they have also claimed they were never trying to get  nuclear bomb in the first place. Which means that all Obama had to say,  diplomatically  of course,  to Iran is what anyone from Brooklyn would have said: "put up or shut up".

Obama also added in a statement making those who claim its his deal or war look ridiculous, that in "15 years the United States will still  have the military capability to prevent Iran from breaking out to a bomb". Wasn't this supposed to prevent war?

If this deal goes through we will probably need that capability because the deal makes war or the threat of war more likely. Not now, but 10-15 years from now. When Iran could have that nuclear warhead and the ICBMs to deliver it, subjecting the world to, if nothing else the potential for nuclear blackmail. Or worse.

Colin Powell once said of foreign policy, if you break it you own it.  For Democrats in congress the reality of the Iran deal is going to be,  if you don't break it you own it. And that is something they need to think about. And something Major General Hassan Firouzabadi hopes never happens.
Posted by Marc Rubin at 7:26 AM