Obama nominates crony and political hack to be ambassador to the U.N. 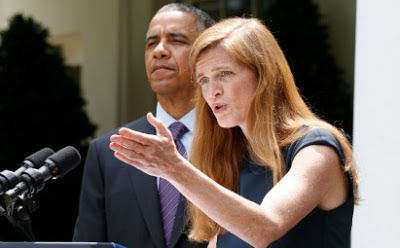 In a move that is pure Washington D.C. and exemplifies political hackery at it's worst,  president Obama named one of his most loyal stooges and a political hack who doesn't have the integrity of a shady used car salesman to be the U.S. ambassador to the U.N.


Amid growing disgust over Obama's previously secret  and now revealed program  to gather the phone records of tens of millions of Americans, the very practice he criticized when George W. Bush was doing it, he named Samantha Power who's claim to fame was calling Hillary Clinton " a monster" during the 2008 Ohio primary and who was one of Obama's most loyal supporters, to replace Susan Rice as ambassador to the U.N.


Back in 2008, during the Ohio primary Powers had said of Clinton:  "We fucked up in Ohio. In Ohio they are obsessed and Hillary is going to town on it because she knows Ohio's the only place she could win. She is a monster too. She is stooping to anything".


She also said the amount of "deceit" Clinton was putting forward was "really unattractive". Which is ironic because when it comes to deceit, there are few who wouldn't say  Barrack Obama was in a class by himself even before the revelations of Obama's government surveillance of American citizens.


When Powers' remarks became public in 2008 she apologized by  saying they "do not reflect my feelings about Senator Clinton whose leadership and public service I have long admired" . This shows, that like Obama, Powers has no integrity and like Obama no courage and no convictions, backing off and reversing herself as soon as her comments became a political liability. Just what America needs at the U.N.


All of her remarks, both her original attacks and her attempt at apology stamp her as the lowest kind of political hack and what's worse,  an uninformed hack at that, whose judgement and powers of observation don't rise to the level of a drunken sailor on a Saturday night.


Every statement Powers had made during that primary was not just dumb and  factually inaccurate it was ignorant and delusional and filled with political hackery.


Powers: "Ohio's the only place she ( Clinton) could win."


Fact: Clinton not only won in a  landslide over Obama in Ohio, she beat him by landslide numbers in 13 of the 15 biggest states in the country as well as beating him in a 14th but by less than landslide numbers ( political scientists call a landslide winning by 10 points or more). The only big state Obama won in the 2008 primaries was Illinois. Had Democrats used the same winner take all delegate formula that's used in the national election and by Republicans in their primaries  Clinton would have landslided Obama for the nomination by more than 1,000 delegates. As it is the primaries ended with Obama beating Clinton by just 60 odd delegates and neither had the 2/3 majority needed to get the nomination.


Powers: She ( Clinton) is stooping to anything. The amount of deceit she is putting forth is really unattractive".


Fact: Barrack Obama was caught red handed telling one of the most egregious, underhanded, deceitful, exploitive,  uncaring political lies in the history of American presidential politics,  stooping to such depths that had the press not been caught up in the "first black president " hype, it wouldn't have just ended his candidacy it might have ended his political career. It would have done just that with any other politician.


It was in Ohio in 2008 where unemployment even before the economic crisis was sky high, with the state having lost more than 270,000 manufacturing jobs that Obama blamed the job loss on NAFTA, a treaty signed by Bill Clinton and so by proxy, was trying to make Ohioans blame Hillary Clinton. Politfact.org called Obama's charge an outright political lie and  that NAFTA had nothing to do with Ohio's job losses but that lie was nothing compared with what was to come.


In a speech right before the primary , Obama looked the unemployed in Ohio in the eye and promised that if he became president he would get rid of NAFTA, the source, according to his first lie, of all their  unemployment problems.  But at the same time he was telling that to the people of Ohio he sent Austan Goolsbee to the Canadian Embassy in Chicago to tell them to ignore what Obama was saying pubicly about getting rid of NAFTA, that he has no intention of getting rid of it, and that what he's saying in Ohio about NAFTA is only for political purposes. Even Richard Nixon would have been too embarrassed to stoop to such levels.


Someone at the Canadian embassy obviously got so fed up with Obama's lying and deceit  they leaked the minutes of the meeting with Goolsbee to the Associated Press which clearly showed Goolsbee telling those at the embassy to ignore what Obama was saying publicly in Ohio about NAFTA, that he wont get rid of it and that what he is saying is just for political purposes.


That is how low both Obama and Powers, not Clinton,  were willing to go, that is how deceitful  and dishonest and "unattractive"  both Powers and Obama were willing to be to try and win an election which they lost in landslide numbers in Ohio anyway, and how low and deceitful and dishonest Powers was willing to be in support of Obama and his blatantly dishonest tactics.  And now, in an example of Washington D.C. one hand-washes-the-other politics,  Obama is rewarding Powers and her own deceit on his behalf by nominating her for ambassador to the U.N.
As the saying goes, it takes one to know one.
But senate Democrats should refuse to rubber stamp this kind of political hackery and reject Powers nomination and insist that Obama nominate someone who has a lot more integrity than Powers.  And, for that matter,  more integrity than Obama.