Obama's misue and abuse of Air Force One costs should come as no surprise. 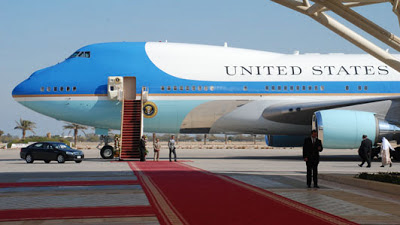 In recent days Republicans have been criticizing president Obama for his constant and often unnecessary use of Air Force One to give speeches or make an address about one issue or another that could have just as easily been given in the Rose Garden, the White House briefing room or the East Room. The problem with Republicans is that will criticize Obama on almost anything and so their credibility when it comes to criticism is zero and almost always partisan and political  since its Democrats that have the most to complain about when it comes to Obama. But on this issue they have a point.


Obama always tends to go for the dog and pony show, the "optics" as the cliche ridden drones in the Washington press corps like to call it, to give speeches in locations around the country that not only add nothing to whatever point he is trying to make, but on top of everything else has yielded exactly zero results regarding policy issues. The only place he didn't go to make a speech was the one place he should have gone -- Gitmo.


There was no good reason for Obama to have gone anywhere to make any of his speeches.


The cost of operating Air Force One is $180,000 an hour to the tax payer. One would think given the economic issues the country has faced the last 4+ years and Obama's less than sterling record in dealing with it, he would be more sensitive to not abusing tax payer dollars just so he can fly somewhere unnecessary and make a speech that usually counts for nothing.


He shows up at more disasters than Anderson Cooper, sometimes justified, as with Sandy Hook and Hurricane Sandy, sometimes not, like the Texas fertilizer plant explosion or the Oklahoma tornado.  If you're president and the country is living in a time of austerity you cant spend $180,000 an hour just to give someone a hug for the cameras.


But given Obama's history, his insensitivity to economic realities and his penchant for putting personal politics before policy, this should come as no surprise.


In 2008 I did a commercial for Democrats For Principle Before Party which opposed Obama's nomination criticizing Obama because, at the height of the housing crisis, when home foreclosures practically exploded over night and families were being thrown out of their homes left and right, at that moment, in August of 2008, Obama showed his empathy and sensitivity for the middle class by deciding it was a good idea to spend $3 million on renting Invesco Field for three hours so he could give his acceptance speech in a venue bigger than the Pepsi Center where the Democratic National Convention was being held.


It should also be pointed out that much of that $3 million was underwritten by AT&T and Verizon shortly after Obama reneged on still another promise which was to vote against retroactive immunity for the telecoms who had illegally given the Bush Administration data on their customers and instead as a U.S. senator found the time to go back to Washington, renege on his pledge to vote against it and voted for it.


So on two fronts the handwriting on who and what Obama was and is was on the wall pretty early.  And his presidency has reflected it in every possible way.


His constant use of Air Force One to make speeches is a talking point Republicans can use, because its something people can understand and see for themselves. And, like his entire presidency, it's going to cause problems for any Democrat in a close race who aligns himself with Obama instead of Democratic party principles and there is a big difference between the two since Obama long ago abandoned the Democratic agenda for what he erroneously thought was his own political well being.


Now it's just a matter of how long its going to take the hierarchy in the Democratic party and the Democratic Congressional Campaign Committee to admit it. For their sake, hopefully before Obama flies off into the sunset and takes the party with him.

He will never be called on the carpet for this or anything else. Another President would be pillared in the press and unfortunately, the over reaching that the Republicans used on Clinton has forced them to not repeat old tricks. They should have held their fire until Barry came on the scene. I really believe Barrys' job is to make speeches and raise funds while his staff, Jarrett in particular, runs the country. Like Dubya, he doesn't have to do the heavy lifting. That was the deal. Bottom line, he's a grifter along with that Madame of his.

Democratic Party Principles? Sounds vaguely familiar but I can't quite remember what they were.