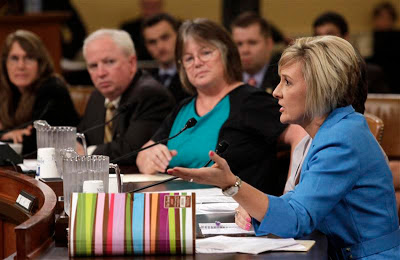 Lost amid all the revelations surrounding the mass NSA collection of Americans phone records was a collection of conservative Tea Party groups who testified at the House hearing on what amounts to the IRS simply doing their jobs in trying as best they could to keep conservative groups from doing what they do best and most often -- try to get around the law or break it without being caught.


Listening to these people testify made it clear why the IRS was paying special attention to them. And why they should have.


These people traded in their tea for whine and complained bitterly about the IRS scrutinizing them about the very things the law said they were not allowed to do -- and they just couldn't understand why.


The fact that these Tea Party conservatives were either so completely ignorant of the law or that they thought it just didn't apply to them, was ample proof that the IRS was right to pay special attention to them not to mention the fact that conservatives, more than other political group exhibit a willingness to break the law, that far exceeds any other political group in the country.


One witness, Becky Gerritsen who was the head of a Tea Party group in Alabama was upset that in asking for tax exempt status based on being a 501(4) C group, the IRS had the gall to ask questions about their communications with legislators and voter education activities, ALL of which would disqualify Gerritsen's group from being eligible for tax exempt status.Yet in her mind, this was unfair scrutiny.


The president of Coalition for Life, an anti abortion group in Iowa  felt victimized that the IRS made her agree in writing that her group would not picket Planned Parenthood or any other abortion provider. The reason is obvious -- doing so would put her group outside the law of what a 501(4) c group can do and would nullify her group from being granted tax exempt status which sticks the tax bill for their activities on the American tax payer, something Tea Party members rail against if tax payer money is any way spent on anything related to abortion but have no problem doing when it comes to their own anti-abortion activities.


Trying to make that point, Jim McDermott, a Democrat who uncharacteristically was sticking with the facts and refusing to go along with another of Obama's PR motivated  cave-ins, pointed out to the group:


"None of your organizations (was) kept from organizing or silenced. We are talking about whether or not the American public will subsidize your work. Each of your groups is highly political."


Which, as highly political, would make them ineligible for tax exempt status something that seemed to go over their heads.  Which also didnt faze Republican Paul Ryan, described as  a favorite of the conservative Tea Party movement and who received applause from the audience when he accused McDermott of blaming the conservative groups for the abuse they received.


"People were singled out because of their beliefs," Ryan said.

Ryan was right. They were singled out because of their beliefs. The same beliefs that have been expressed many times before by other conservatives  like Tom Delay and Duke Cunningham  who are now doing time in federal prison -- and possibly Michelle Bachmann who announced she is not running for re-election to the House a day after it was revealed she is being investigated for campaign financing fraud --  the belief that the law doesn't apply to them.

I couldn't agree more that no tax-exempt organization, whether it's the Coalition for Life or, indeed, the NAACP, should be allowed to picket. I assume that you are as disgusted as I am that the NAACP has been permitted to retain its tax-exempt status despite its record of repeated picketing from the 1930s on.

"I assume that you are as disgusted as I am that the NAACP has been permitted to retain its tax-exempt status despite its record of repeated picketing from the 1930s on..."

you are, unfortunately, and like those Tea Party members testifying, uninformed. The NAACP, regardless of what you think of them as an organization is NOT, repeat NOT a 501(c)4 group which is defined as a group engaged only in social welfare. Now many would argue that its stand against racism would qualify the NAACP as a group promoting social welfare however they have not applied as a 501(c)4 group. Therefore their tax exempt status (if they have one and I dont know for sure that they do) would be completely irrelevant to what the Tea Party groups are whining about because they were being forced to comply with the law they were trying to take advantage of.