Why NSA claims of foiled terrorist plots should be met with skepticism. 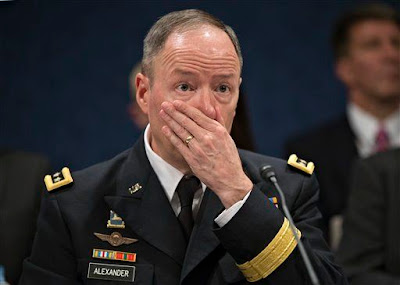 During a hearing held by the House intelligence committee the director of the NSA General Keith Alexander was bombarded with powder puff questions by House committee members who saw their mission as bolstering the NSA against criticism and discrediting Edward Snowden, the NSA whistle blower who apologists try and put down as everything from a high school drop out to ignorantly ( as far as the law and definition is concerned) a traitor.


During the questioning Alexander made claims regarding the success of the NSA spying program with regards to foiled terrorist plots that are at best dubious.


First, the over all claim was that the NSA collecting phone records and Internet communications of hundreds of millions of Americans over the last few years foiled 50 terrorist plots. Of those 50 it turns out only 10 were in the United States. And while Alexander offered no details on how these  10 were foiled by the NSA collection of everyone's phone records, at least two should be met with extreme skepticism. And those two happen to be the most significant.


Alexander and other witnesses claimed that a plot to blow up the New York Stock Exchange and an attack on the New York subway system was foiled by these mass collections of phone records. Both claims are doubtful.

It's indisputable that New York is probably the number one terrorist target in America, the place where terrorists would most like to hit. They haven't since Sept 11, 2001.


Credit for New York City not having had one single terrorist attack since 911 goes to Ray Kelly, New York City police commissioner, the NYPD anti-terrorism task force, Mayor Bloomberg,  and the New York office of the FBI.


The fact that there has been no successful terrorist attack on New York City in the 12 years since Sept 11, and that this predates the NSA domestic collection of Americans phone records by nine years, reality flies in the face of the NSA claims.  And that this fact was never brought up by members of the committee made them sound more like actors in an NSA promotional video than members of congress doing oversight.


The second reason to doubt NSA claims is that since they were made neither New York mayor Mike Bloomberg, nor commissioner Ray Kelly have said a word supporting the claims that it was the NSA secret collection of American's phone records that were responsible for preventing those attacks.


Given the national and international controversy over Snowden's disclosures and Obama himself trying to justify the program and calling for dialogue, had those programs been directly responsible for foiling two major attacks on New York City, Mayor Bloomberg and Commissioner Kelly surely would have publicly confirmed it. And supported it.  They haven't.

Their silence speaks louder than Rep. Peter King, Dianne Feinstein, Mike Rogers, Obama and others who have defended the program as essential to keeping Americans safe.  And speaks louder than General Alexander and witnesses trying to justify the program while at the same time admitting that no one can point to single plot that was foiled exclusively because of the NSA collection of  phone records and internet communications.of hundreds of millions of Americans.


Add Obama's preposterous statement to Charlie Rose in a PBS interview when asked if it wouldn't be better to have more transparency in the process to which Obama replied," We have transparency. That's what the FISA court is for", there is all the more reason to question the validity of the program. The FISA court is a top secret classified proceeding where there is no public transparency at all. They operate in complete secrecy. Which is why the FISA order which Snowden gave to the Guardian authorizing the mass phone record collection is marked " Top Secret".


That there is more than a little reason to question the entire program and the efficiency of the congress to exercise proper oversight came when a witness defending the program made the point that even if collecting phone records and internet communications of hundreds of millions of Americans saved even one life, it was worth it.


Everyone on the committee agreed that a program that saves the life of even one American is worth it. These are the same people who are on the record as opposing background checks for people who want to buy a gun.