CNN and tragedy: covering it or milking it? 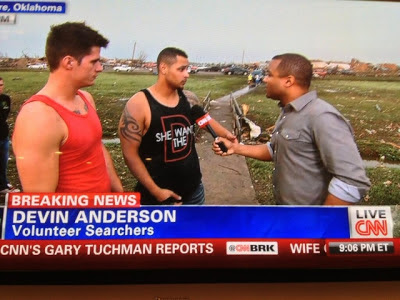 When tragedies hit it is obviously always toughest for those going through it,those  directly affected by it and their friends and families and neighbors.  But after that what becomes especially tough for everyone else in the country is having to watch it and get news reports and coverage from some of the most manipulative, self-serving, and purely exploitive people in the country -- journalists. Especially those on cable TV news outlets like CNN and MSNBC.


CNN pioneered the visually obnoxious practice of taking the same 6 or 7 seconds of news footage, like people crying, people hugging, a tornado bearing down, the same bloody face or whatever else it might be that they think will attract attention like they are presiding over a side show,  and replaying it successively, over and over, in consecutive repetitive loops so constant and repetitive that it looks like a CNN director in the control room passed out and fell face forward on the "play" button with no one else there to help. This obnoxious  nonsense started during the Monica Lewinsky frenzy when CNN replayed over 20 consecutive times  the same six or seven seconds of footage of Monica Lewinsky getting out of the back seat of an SUV on her way to testify to the grand jury while some "analyst" droned on.


They still do it to this day. They did it after the Boston marathon bombing, replaying the same video of the instant the explosions took place over and over and over again no matter what they were reporting or who they were interviewing. They didn't just do it for days. They did for weeks. And they are doing it again with the coverage of the Moore, Oklahoma tornado.


This isn't journalism. This is sheer exploitation, almost voyeurism for their own ends. The same way CNN abuses the term "Breaking News". Because research shows that when they use that term, people tend to pay more attention and watch longer, even if the "Breaking News" is days old. The morning after the tornado in Oklahoma hit, CNN had the "Breaking News" legend on display and under it, "How the Day Unfolded". How the day unfolded is not breaking news. It is a summary. It is a review. it is NOT "Breaking News". But every item, every interview, everything anyone had to say from Oklahoma came with the prefix "Breaking News".


During the coverage of the marathon bombings, CNN saw its ratings jump 194%. Given how small CNN's ratings are on a daily basis ( somewhere in the neighborhood of 300,000 viewers) tragedies like this are a financial windfall for the network. And they know it. And it was clear when every anchor on the CNN payroll was doing their live shots from the same corner in Boston that they were going to milk it for all it was worth.


The best coverage of the events unfolding from Boston was on the networks, CBS and NBC in particular where people who acted like grown ups and with some gravitas and a sense of what it really means to be a journalist at a time when its needed most, did a better job at reporting the news and covering events than the almost comical response of a network like CNN who sent everyone but the cleaning lady to Boston to do stand up live shots on the same street corner and then stayed for weeks. Even when nothing was going on behind them and no news of significance was being reported and whatever news there was could have easily been reported from their studios in Atlanta or New York. But a decision was made to keep them there in Boston and it had nothing to do with journalism.


Perhaps shockingly, as bad and as dishonest and biased as they are when it comes to political and policy journalism, when covering live events that have no political slant or bias  they can exploit, Fox News, of the three cable networks seems the least exploitive, most focused on communicating facts,  reported by journalists on the ground who, unlike CNN and MSNBC don't seem to think that how they personally feel about what they are covering is news and needs to be told to the world.


In terms of reporting versus exploitation it also should be noted that during their coverage, CNN anchors tell people to go to CNN.com/impact to see how they can help the victims. When one goes to that page one sees two banner ads for Nissan, an ad for top stock picks, and an ad for Lifelock Identity Theft protection, and since ad revenue online is based on the number of people accessing a page (the site owner gets $5 per 1,000 hits per day)  sending people to that page seems to have at least as much to do with contributing to CNN's bottom line as it does helping the victims of the Oklahoma tornado.

Wolf Blitzer added to CNN's  embarrassment and further sinking into the morass of pandering and lack of journalistic standards ( as he always embarrasingly does) when he insisted on not just interviewing a tornado survivor but putting his own words in her mouth when he asked the survivor, "You've gotta thank the Lord, right? Do you thank the Lord for that split-second decision?"
The survivor as it turns out was an atheist who said so but didnt make any more of an issue of Blitzer's attempts at pandering to religious conservatives and that is exactly what he was doing given the part of the country he knew he was in. It isnt just that no reporter has any business insinutating whatever their personal religious beliefs might be into a story but in Blitzer's case given his history it wasn't even sincere but pure pandering.


It is significant that weeks after the Sandy Hook shootings, with CNN still anchoring their news coverage from Newtown, residents started appearing with signs that told CNN to go home. They finally did. Like an unwanted house guest who long overstayed their visit and finally had to be kicked out. How long before the residents in Moore, Oklahoma feel the same way is yet to be seen. Right now they have more important things to do.