A chastened Maureen Dowd gets the message with Obama's failures on gun control. 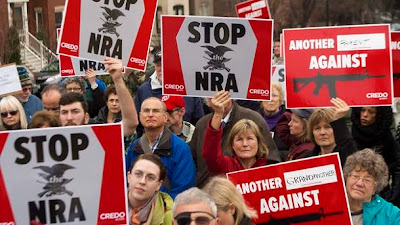 A few weeks ago, Maureen Dowd was drubbed here for a column she wrote on Hillary Clinton and a prospective  Clinton run for the presidency 2016, asking if Clinton would run without what she called Clinton's "foolery".


Dowd was pilloried here for her own hypocrisy in ignoring that it was Obama who played her and a lot of other people for the fool with his almost daily foolery during the 2008 primaries and Dowd's myopic exercise in self-denial that it was the candidate she supported during the 2008 Democratic primaries,Barrack Obama,  who hit new lows in "foolery", dishonesty, underhanded campaign tactics, sheer lying, reneging on promises and who never exhibited an iota of any kind of qualification to be president  but like most in the press thought it best to support Obama by judging him on the color of his skin instead of the content of his character.


Now that the gun control bill failed, a bill that had the support of 91% of the American public, Dowd wrote a column exhibiting her too little too late disillusionment with Obama.

"It’s unbelievable that with 90 percent of Americans on his side, he could get only 54 votes in the Senate. It was a glaring example of his weakness in using leverage to get what he wants. No one on Capitol Hill is scared of him."

It's not so unbelievable to anyone who kept their eyes open during the 2008 Democratic primary when a look at Obama's 11 year record as an elected official showed that he never initiated, created, sponsored or co-sponsored a single peice of legislation. In other words he spent 11 years doing nothing but trying to get himself re-elected.


The truth is its never as tough as Obama says it is. Its only tough when you have no convictions, no principles, nothing you've ever really believed in and tried to see it through. When that's been your life, naturally you're going to fold at the first obstacle and throw in the towel. Obama has done it with Gitmo when he faced Republican oppostion, he did it with the public healthcare option when he couldn't stand up to health insurance industry lobbyists, he did it with finance reform when he couldn't stand up to Wall Street, he's done it with the budget when he couldn't stand up to Republicans and he did it with gun control when he couldn't stand up against the NRA and political opposition in any meaningful way.
And keep in mind Obama was elected with the biggest congressional majority of any president in 60 years. And he still didn't accomplish a thing of value.
Dowd wrote that Obama in saying that the Newtown families deserved a vote set his sights too low, that they deserved more than a vote, they deserved a law. That is of course true but its what to expect from someone who has never accomplished a single concrete thing in his life beyond fulfilling his own personal ambitions. Going for a vote instead of a law is the product of inept and incompetent thinking, which in spite of those who think using $10 words that have no real meaning is "soaring rhetoric", has more to do with covering up what's missing than in getting anything accomplished.
Yes the gun control failure is another Obama failure. Just like dumping the public option because of his inability to stand up to the health insurance lobby was a failure. Just like his reneging on his promise to close Gitmo was and is a failure. Just like his inability to stand up to Wall Street and pass meaningful finance reform was a failure. Just like everything in Obama's presidency has been a failure. But its also Dowd's failure and the failure of journalists like her from Arianna Huffington, Jonathan Alter, Keith Olbermann, Richard Kim at the Nation, Gail Collins and so many others who turned a blind eye to what should have been obvious about Obama back in 2008. Now they are complaining.And now it's too late.

I can understand the media whores chasing a clever marketing campaign. It gave them something new to write. However, why did the Democratic Party turn on Clinton and become electorial prostitutes no different than 2000 when the GOP adevanced their own pitch man, George Bush? In 2008, the Democrats lost all their integrity. This is no longer the party I voted for since George McGovern through John Kerry.

It wasnt the whole party it was the hierarchy led by Nancy Pelosi, Donna Brazille and unfortunatley because I love the guy, Howard Dean. And its because they are weak and always play not to lose and so as Obama has proved, even when they win they lose. And then there was the news media. I'm reluctant to call any of them prostitutes because most prostitutes have more integrity and are more honest about what they do than the news media.

Nancy (unfortunately she's my rep)I get because she wanted to be the most powerful woman in Washington, Brazille for obvious reasons,but Dean? Either he had some grudge against the Clintons dating back to 2004 or he was lobbying for a cabinet position in BarryLand.
As for the remark about the prostitutes, I deeply apologize as you are right about their honesty with respect to their choosen profession. I forgot that I knew 2 individuals who during some tough times did what they had to do, no excuses made. Thanks for the honest and concise assessment of todays Democrats. As a Democrat in Exile, now Independent, I don't know if I will ever return home.

Who cares about Maureen Dowd? She's not worth more than a minute of anyone's time.

I found this article incisive: