For Democrats It's Back to the Future: Chicago '68 Coming to Philadelphia 2016 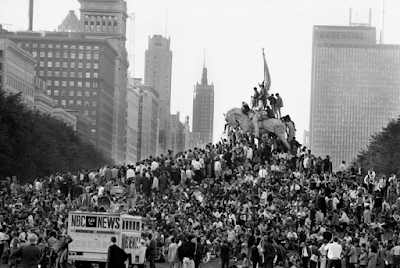 Not since 1968 and the massive demonstrations against the Vietnam war during the Democratic convention in Chicago will Democrats see the kind of  anger, resentment and passion they will see directed against them by Sanders supporters and more specifically against Hillary Clinton who has become the Ma Barker,Imelda Marcos and Eva Peron of American politics for her corrupting the democratic process in collusion with the DNC and a Banana Republic news media to steal and rig the Democratic nomination.

The demonstrations  and protests promise to be massive and disruptive against what amounted to a Hillary Clinton-Debbie Wasserman-Schultz and DNC criminal enterprise to steal the nomination from Bernie Sanders to make good on promises made to Clinton in 2008 in return for not contesting the nomination against Obama. Its already started to come back to haunt them.

It was going to happen even before a Wikileaks email dump confirmed that Clinton, the DNC and the notorious Debby Wasserman-Schultz, their super delegates and just about everyone associated with the Democratic party establishment all the way down to Obama were part of what amounted to election fraud,rigging and collusion making them the most dishonest, corrupt, fraudulent collection of  Democrats overseeing the most dishonest election process since Boss Tweed rigged elections in New York in the 1850's.


There were going to be huge protests by Sanders supporters against Clinton anyway for the fraud and rigging of a nomination she never would have won otherwise. But the email dump by Wikileaks confirmed  how deeply politically corrupt the Democratic party was and how much in collusion with banana republic journalists at  MESSNBC, the usual collection of sycophants and cowards at CNN, the corrupt journalists at AP, The Hill,Politico and NY Times Hillary Clinton's campaign really was.
Which explains why when anonymous superdelegates came out of the woodwork in Februrary to make unofficial declarations for the first time in political history for Clinton the news media not only didn't question what was going on they dishonestly added those unofficial declarations to Clinton's pledged delegate totals making the current collection of journalists at CNN,MSNBC,AP and others the most dishonest and politically corrupt the country has ever had.

The corporate media was and is as opposed to Trump as to Sanders and ironically for the same basic reason: neither serves corporate interests. Trump can't be bought because of his money, Sanders can't be bought because of his integrity but they all know Clinton can be bought. And has been. And so the corporate media has been slanting coverage for Clinton in collusion with the DNC from the beginning.
The exposure of emails showing the depths of collusion between Clinton,the DNC and the news media with thousands more emails to come has created an even uglier situation for Democrats than they anticipated and has put them in a political quick sand which will continue to drag them down.And like real quick sand the more they struggle to get out of it the more it will drag them down.

Debbie Wasserman-Schultz' resignation as Chair of the DNC and her immediate hiring by Hillary Clinton as co-chair of her campaign re-enforces the reality that Hillary Clinton is a political criminal running a politically criminal enterprise and the DNC has been nothing more than her gang. And Donna Brazile who will replace Wasserman-Schultz is no better than she was.

It was Brazile who, in 2008 when super delegates looked like they would go Clinton's way, announced she would quit the Democratic party if super delegates decided the nomination. And they never voted. Instead a backroom deal was cut between Obama and Clinton which included Clinton being named Secretary of State. But it also included promises made for 2016  that we've seen played out during the primaries. Sanders was the fly in the ointment they never anticipated but the Clinton campaign knew the fix would be in one way or another. It was why they were so confident,making statements from both Clinton and Robby Mook her campaign manager that there was no chance she wouldnt be the nominee. It was a confession. They knew the process was rigged for Clinton.

With Donna Brazile now acting as Chair, Clinton has the same dishonest ally she had in Baby Faced Wasserman-Schultz. Brazile railed against super delegates in 2008 but as part of the fix for 2016 supported super delegate declarations for Clinton that started back in February.

But the chickens are coming home to roost. Brazile said in 2008 that if super delegates decided the nomination she would quit the Democratic party. Sanders voters are going to do the same and all those statistics put out by the same colluding news outlets claiming a majority of Sanders voters will vote for Clinton is as dishonest and fabricated as their other coverage since January. Sanders voters and supporters despise Clinton and the DNC to such a degree they would rather go without food than vote for Clinton.
And even Sanders anticipated support for Clinton won't change that. Everyone knows having run as a Democrat Sanders has no choice but to endorse her. Who else would he back? A 3rd party candidate when he has caucused with Democrats fur 25 years?
But any attempt by Clinton supporters or the DNC to stifle or repress Sanders supporters expressing their disgust for Clinton  or their support for Sanders either inside the convention center or out is going to be met with the kind of resistance that will overshadow Clinton and anything the DNC does over the next three days. And if it gets really ugly Clinton and the DNC and for his part Obama who is actually the force behind all of it since the DNC marches to his orders, will be to blame. But that doesn't mean it has to be violent.

When people think of Chicago '68 they automatically think violence but the violence in '68 was caused by the Chicago police who initiated the violence in an attempt to silence or stifle demonstrators. They were ordered to do it by Mayor Richard Daly who didn't want the demonstrations to overshadow the convention. They got the opposite. And Democrats lost in November.

The DOJ investigation into the violence at the '68 convention called it " a police riot". It was the Chicago police out of control and violent not the demonstrators.

Unless the DNC does some really stupid things and from what we've seen from their emails stupid is very possible. Like trying to  physically take way pro-Sanders signs from his delegates in which case Sanders  delegates will no doubt resist. Or even more stupid,  if the DNC tries to skip a roll call vote that Clinton cant win on the first ballot which would force super delegates to vote, the only way Clinton can get the nomination which will  certainly turn off viewers around the country including independent voters.

If the DNC tries to stop a roll call in order to avoid Clinton having to endure the national embarrassment of a prime time vote where Sanders will record almost as many pledged delegates as she did without securing the nomination on the first ballot, if they pass resolutions like trying to  nominate Clinton through acclimation which means through a voice vote where its agreed Clinton is the nominee and all votes are officially recorded for her (it was done dishonestly for Obama in 2008), if that happens and Sanders delegates are denied the chance to cast their 1900 votes (to Clinton's 2200+) on the first ballot all hell is going to break loose inside the convention center and out. Hopefully the DNC isnt that stupid.

No matter which way it goes its going to be bad for the DNC, the Democratic party as a whole and Clinton specifically.

The convention promises to be everything Clinton and the DNC didnt want courtesy of Sanders voters who are not going to take Clinton and the DNC's corruption lying down. And all  of it is something Clinton, the Democratic party and the DNC brought on themselves with their blatant cheating, lying, election fraud, news media collusion distortion and manipulation. And with the emails confirming they are corrupt to the core they will probably pay for it dearly both in Philadelphia and in November.
Posted by Marc Rubin at 5:22 AM

look up this sentence in your post. Typo. "Sanders was the fly in the ointment they never anticipated but the Clinyon campaign new the fix would be in one way or another." Just delete this comment once it's fixed.