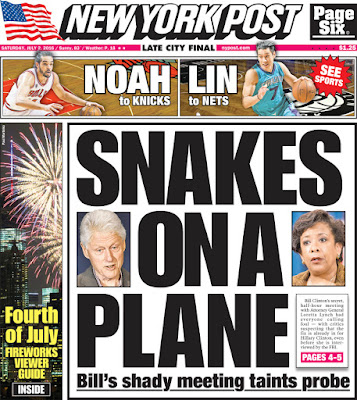 Loretta Lynch has been taking a lot of heat from every quarter for not throwing Bill Clinton off her plane. And maybe it's valid. But its also true that Lynch was ambushed by Bill Clinton when he showed up unannounced while her plane sat on the tarmac at Phoenix betting Lynch wouldnt throw him off. He was right.


When Clinton boarded that plane he knew what he was doing. And no doubt that Lynch suspected it too.There is also little doubt that Bill knew that what he was doing was not just inappropriate but putting Lynch in the position of having to violate the DOJ's code of conduct to talk to him. Clinton knew that too and didnt care. For one reason. Desperate times call for desperate measures.

That all Clinton did was talk about golf and his grandchildren is no doubt true. But it had a purpose.
And Bill Clinton's purpose in boarding Lynch's plane to make small talk was to gather intelligence.

Bill Clinton is a smart guy. Even his enemies wouldnt take that from him. Bill was on an intelligence mission to see what if anything he could glean from making small talk with Lynch and how she acted and related to him based on whatever she might know about the FBI investigation into Hillary Clinton. Bill was smart enough never to go near questions related to the investigation. That wasnt his purpose. It was to use other means to see what he could find out.

Was she cordial? Relaxed? Was she stiff and formal? Did she look him in the eye or evade his glance? Bill was looking for anything that would give him a clue, her body language, her voice inflection, her tone, anything. Did she seem at ease meaning everything with the FBI was hunky dory and there was nothing to worry about? Or was she a little tense, seem distracted, did small talk make her uneasy meaning Billary had a lot to worry about?
That was the purpose of Bill's intelligence mission. Except it showed a complete lack of intelligence since not only was it unethical for him to be there it put a spotlight on the investigation that had been going on in the background for some time and added  to public perceptions of Hillary as unethical  and dishonest.

There was backlash from the meeting in every quarter except for Hillary's robots and has been so negative it put Hillary back on the defensive and made headlines everywhere. Even congressional Democrats admitted it looked bad and the meeting and its fallout has been front page lead news all around the country.

But Bill's gambit to have a one on one to see what he could learn by making small talk showed a lot more than bad judgement. And it's something no one is talking about. It showed that Bill and Hillary are very, very worried. About the investigation and its possible outcome.

Bill being married to Hillary knows how much she is worried. And Hillary knowing more than anyone else about what happened with her private server and why is giving every indication she knows she has something to worry about.

So much so that Bill was willing to risk how bad the appearances were going to look to take the opportunity to ambush Lynch on her plane to see what he could learn. Inquiring minds wanted to know. Does Hillary have anything to worry about it or not? The risk Bill was willing to take was proportionate to how worried they are and how much they think there is something to worry about.
In all likelihood Bill learned nothing specific from Lynch's demeanor and at the same time made it a lot worse for Hillary. Its put the criminal investigation under even more scrutiny than before and everything the FBI and the DOJ does will be under a microscope. But it also raises questions about Hillary suddenly (yes suddenly) going in for her long awaited FBI interview this weekend.

It certainly wasn't scheduled. If Bill and Hillary knew  Hillary was  going to request an FBI interview this weekend there is  no way even Bill Clinton would have risked trying to see Lynch days before. The fact that Hillary Clinton's request came so soon after Bill's meeting is enough to suggest it had everything to do with what Bill surmised from the meeting.

The FBI has made witness schedules public in the past for Clinton's staff. They were no secret. They are scheduled well in advance. This is to give witnesses time to prepare, refresh their recollection as lawyers like to say and allows them to arrange a day and time so their lawyers can be present. The interview this weekend wasn't previously scheduled and could only have been a last minute result of  Bill's impromptu ambush of Lynch.

Hillary had been the last person on the witness list for a long time. Too long. If the FBI had nothing they would have called Hillary Clinton as the last witness a long time ago. They were content to continue the investigation without questioning her. That it was getting this close to the convention without her being called for an interview would be something to worry about it if your Bill or Hillary or a supporter. There has to be a reason Hillary forced the issue this weekend.
Bryan Pagliano, the IT pro who set up her email server first pled the 5th on the advice of his criminal defense lawyer who clearly believes Pagliano committed one or more federal offenses. The FBI gave him immunity and he talked. Since everything he did was at Clinton's direction it would be hard to think that if Pagliano committed an offense Clinton didn't. But we will soon know.
People are free to speculate what conclusions Bill mightve drawn that forced Hillary into the impromptu FBI meeting. Did Bill feel everything was good so now was the time to go? Or did he get a sense things weren't going well and thought Hillary better get in there and do damage control?
Anyone's guess would be valid. Mine is the latter. If you think things are going well you leave well enough alone and go on with your business. But if you think there might be trouble, now would be the time to get in there and try and right the ship. I think Bill smelled trouble and told Hillary to get in there ASAP,especially since it's a holiday weekend when people are paying less attention to the news.

Whatever is going to happen will be within the next 3 weeks.

But what Bill did in throwing appearances to the wind in order to find out anything he could gives the appearance of being desperate. And since Bill knows what Hillary knows maybe they think they have good reason to be.
One other thing to keep in mind: indictments are only issued for felonies not misdemeanors. For anyone who thinks misdemeanors are trivial, like a parking ticket,former general and CIA  Director David Patraeus pled guilty to a misdemeanor charge in his case of mishandling classified material. It resulted in his losing his job,losing his security clearance for life and 5 years probation. There could be no indictments and Clinton could still be charged with misdemeanors serious enough to end her candidacy.

If the FBI does have the evidence to warrant an indictment or multiple indictments  or charges of any kind, we are going to know by July 25. One way or the other  the case and its conclusions will be made public before July 25th.

Obviously Bill and Hillary couldn't wait.
Posted by Marc Rubin at 7:55 AM

Clinton planned the visit and didn't care about Loretta Lynch and her reputation. He did
Not get information he is not that naive-he did it to stir things up hoping to force her to recuse herself and stall, desperate yes stupid yeah we know his judgment is not very good even though he's supposedly so intelligent. He fooled no one and he doesn't care.