Comey Shreds Clinton Character and Conduct But Says Not a Felon. But It's Not Over. 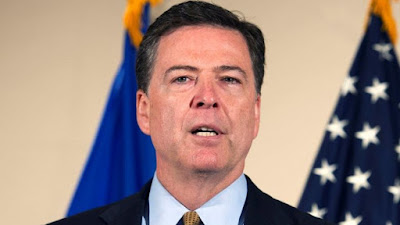 Almost everyone is finding it hard to understand why, based on the case and evidence laid out against Hillary Clinton by FBI Director Jim Comey, he made the decision not to indict.

Comey presented a case littered with conduct by Hillary Clinton that included "extreme carelessness" in mishandling  classified government information that ran the gamut from "sensitive" to "Top Secret"and how thoroughly dishonest Hillary Clinton was in lying to the public about everything related to her server from "there was no classified information on my server" ,"I did not send or receive any classified information" ( she sent or received 110 documents that were classified)  "I turned over everything" ( there were thousands of her emails she did not turn over) and more which to many seemed to violate laws that Comey believed couldn't be
successfully prosecuted.
One of the main bones of contention with Comey's decision was his finding that there was no "intent" on Clinton's part to violate these laws. But the wording of the law itself is not limited to "intent", but says "intent or negligent" . Comey has characterized Clinton's conduct as "extreme carelessness". Many have wondered what the distinction is between "extreme carelessness" in handling classified material and "negligence" especially when Comey said Clinton "knew or should have known" the material was classified, some were actually marked "classified" and that "someone in her position knew or should have known that her unsecured private server was no place to have these conversations".
Why that isn't negligence hasn't been answered but Comey's presentation against Clinton was as devastating politically as an indictment would have been criminally.
Its a reflection of those supporting Hillary Clinton that many think its a positive to be able to say Hillary Clinton is not a felon. But were it not for Comey making a  distinction between "extreme carelessness" and "negligence" Hillary Clinton would be on her way to getting a mug shot.
Regardless Comey's statement about Clinton makes her the most untrustworthy patently dishonest person the Democrats have ever run for president placing Barrack Obama firmly in second.
But glossed over by almost everyone in their focus on whether Clinton would be indicted was something almost as serious that still hangs over her. And may still end her candidacy. And Comey alluded to it.
Comey said in his decision not to recommend an indictment," this is not to suggest that a person engaged in this activity (all the things Clinton did) would face no consequences. To the contrary. Those individuals (like Clinton) are often subject to security or administrative sanctions. But that is not what we are deciding now".
Saying " this is not what we are deciding now" clearly leaves the door open and implies other decisions in the future regarding Clinton, and his statement at the time was purely about whether Clinton would be criminally indicted.
Which means there is reason for Clinton and her supporters not to breath too easily yet. Its not over.
There is good reason to believe based on  Comey's statement and presentation of evidence against Clinton which rose to the level of "extreme carelessness", combined with what we know were her intentionally false public statements from "my server was approved" to her false claims (the AP counted 7)made regarding her handling of classified documents as well as other transgressions including the possibility of her unsecured server being hacked and using her private server  to discuss sensitive matters while within countries that are "adversarial to the United States",  there is every possibility that Hillary Clinton is going to lose her National Security clearances.
The State Dept announced they are opening investigations into all of Clinton's staff to determine if security clearances will be revoked at State. It's unclear if Clinton is included in the review but there is no reason to think she wouldn't be.
If Clinton has her security clearances revoked for her clear and irrefutable violations of 4 and possibly 5 of the guidelines that can disqualify someone from a security clearance her candidacy is over. It's farce to think anyone who is disqualified from a security clearance and can't receive classified or Top Secret information can be president.
Being labeled a security risk and losing her security clearances would end Clinton's candidacy as much as an indictment.
After viewing State Department guidelines related to national security clearances and what disqualifies someone from a security clearance that allows them to handle classified information defined in Section K under "handling protected information" it's clear Hillary Clinton violated a minimum of 4 and probably 5 of the guidelines (par. b,c g,h,i of Section K) that would disqualify her from seeing or handling classified information of any kind.(The guidelines can be read here)
There are 3 mitigating circumstances in which someone violating national security guidelines might not have their clearances revoked and not one of them apply to Clinton.

In other words, right now Hillary Clinton couldn't get a job at the State Department or get a Top Secret security clearance. In fact she would probably be disqualified from having any security clearance at all. Not a good thing to have on your resume if your running for president. And it is axiomatic that all government agencies honor the security clearances or disqualifications from one agency.

Right now based on Comey's presentation and State Department guidelines regarding handling of classified information, Hillary Clinton would be considered a security risk and denied security clearances at State.
Comey's statement that someone who did what Clinton did would face consequences such as security sanctions and  ending  with " but that's not what we are deciding now" implies that  is going to be decided.
Its almost impossible to believe that given what Comey laid out and existing precedent and State Department guidelines regarding handling of classified information and what constitutes a "security concern", that Hillary Clinton will not face security sanctions as anyone else would who, as Comey said, engaged in similar conduct and violated the same security rules Clinton did.
If State is going to make that evaluation one would think it will be soon. Before the Democratic convention. Because it is obvious that no one who is disqualified from having a national security clearance can be president.
If Clinton is not disqualified while her aides are  it might cause the biggest breach of public trust since Watergate. And people are going to want to know why.But given the scathing report against Clinton issued by the Inspector General at State it's not likely Clinton will get a pass.

Because as Comey said, there is precedent for people who engaged in conduct similar to or less than Clinton's who faced " security sanctions" . That means being stripped of your national security clearances. As Patraeus was. And there is every reason to believe the same will happen to Clinton. If she is part of the State Department investigation it is a  certainty Clinton  cannot survive a security review. If she is not part of the investigation people are going to want to know why and in all likelihood all hell will break loose in congress since there is no reason to exclude her.
For now Clinton and her supporters still have to shoulder Comey's scathing indictment of Clinton, her lying, her "extreme carelessness" in mishandling classified information and a litany of other transgressions from "knew or should have known", to making US classified information vulnerable to "hostile actors", and so much more that even some friendly news outlets have called it "devastating" and have been pounding away at her. That is not going to go away.
The last straw may come with the State Dept  revoking her security clearances.That would effectively  end her run for president.

If that happens,in spite of not being indicted for felonies,stripping Clinton of her national security clearances would end her presidential run.She would have to drop out. And if that happened it could be said that in the end the punishment will have fit the crime.
NOTE: The State Department announced today (July 8) they have opened an investigation into Hillary Clinton's security clearances.
Posted by Marc Rubin at 8:29 AM

1. Did Hillary lie to the FBI in her recent sitdown? Lying to federal investigator is a felony. Congress would love to see the transcripts, Mr. Comey.