Clinton and the FBI Decision: A Comey of Errors. 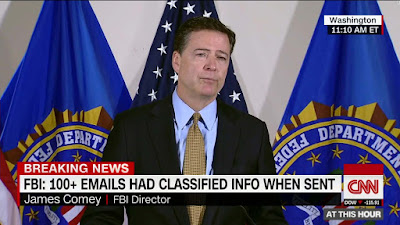 James Comey is an honest man. A man who's integrity is beyond reproach. And nothing about that has changed with his decision not to recommend prosecution of Hillary Clinton for what was clearly her blatant disregard for State Department rules regarding the protection of sensitive to classified national security documents and in his words, her "extreme carelessness" which many argue is the same as negligent which by statute would rise to the level of a felony.


But the error James Comey made in deciding against recommending criminal prosecution for Clinton was not about the evidence which speaks for itself, it was Comey's reasoning, not some adolescent comic book conspiracy theory about a fix that some believe.

The primary reason Comey gave for not recommending prosecution was that he could not find any precedent to prosecute based on Clinton's actions. And, he said, he went all the way back to 1917 and the origin of the statute through to the present  to look. And therein lies his error.

James Comey felt because there was no precedent there ought not to be a prosecution. However in the case of Hillary Clinton based on the facts,specifics and the times in which we live and technology available that was not available to any other Secretary of State or State Department employee between 1917 and 2008, what was needed in Clinton's case was not to look for a precedent but to set one.

And the reason setting a precedent in Clinton's case was called for was  the simple fact that everything Hillary Clinton did was in fact,  unprecedented.

Her actions and behavior were aided and abetted and made possible by a technology that simply didnt exist from 1917 through 2008. And her motive, to avoid her emails being disclosed through the Freedom of Information Act, also didnt exist until 1967 and was then had to be amended in 1996 to cover electronic communications like computer email.

Because of all these things, Clinton's actions deserved a precedent setting prosecution based on unprecedented behavior made possible by unprecedented technology and a motive that didnt exist until 1996.

Clinton is only the third Secretary of State to serve during the high tech era of Information Technology and the information age. The first two were Colin Powell from 2001-2004 and Condoleeza Rice from 2004-2008.

But the technology available during Powell and Rice's tenure was almost horse and buggy compared to what exists now and what was available to Clinton when she was Secretary of State and what she in fact used.

What Clinton did with her private server and multiple hand held devices violated multiple and serious specific State Department rules regulations and guidelines against doing specifically those things and would disqualify anyone from having any security clearances at all from sensitive to Top Secret. Those guidelines didnt exist till 2006, before Powell's tenure and two years into Rice's and so to look for precedent to use to prosecute Clinton made no sense.

Further, Clinton's claim that she did it for convenience is in its own way even more damning  than the real reason of avoiding the Freedom of Information Act to keep secret work related emails she didnt want people to see or know about. Clinton's claim of convenience portrays her as a self centered,narrow minded,reckless and feckless  character who put her own trivial and selfish need for personal convenience ahead of national security guidelines. So even her dishonest public statement about why she did it is character revealing.

That Clinton offered that as the reason she was willing to violate specific StateDepartment rules and regulations pertaining to protected confidential State Department material makes Clinton look petty,conniving and irresponsible.

State Department guidelines for protecting all material, not just classified as the guidelines state, were not there for Clinton's convenience and that she disregarded those guidelines and used personal convenience as her excuse makes Clinton unqualified to handle such documents.

For the record, the "same thing" that Powell did that Clinton had tried to use as an excuse to justify her conduct was that from 2000-2004 when he was Secretary of State Colin Powell had an AOL email account. AOL.

Hillary Clinton wants you to compare Powell having an AOL email account which was never used to communicate sensitive or classified information, to her own use of a private email server  in the basement of her home used with mutiple hand held devices (which blows her "convenience" story of only wanting one device for everything for anyone brainless enough to have believed it in the first place) in which she sent and received over 55,000 State Department emails, 110 of them classified.

That is Clinton's idea of Powell's having done the "same thing". It shows an almost pathological willingness to lie about anything for self-serving reasons. And she wonders why a large majority say she is dishonest and untrustworthy.

It  was an error of logic and reasoning on Comey's part to recommend against prosecuting Clinton based on a lack of precedent when, in  the case of Hillary Clinton precedent was exactly what was called for.What Clinton did was unprecedented and she did it with unprecedented equipment and it called for an unprecedented prosecution.

In citing the case of David Patraeus Comey pointed out that he had physical hard copies of classified material  hidden in a drawer in his home. That could easily have found precedent and similar conduct between 1917 - 2008 and so precedent was easy to find.  There was  no precedent to what Clinton did and so precedent should never have been the deciding factor.

No one can disagree that what Clinton did was unprecedented. It should have been met with a precedent setting prosecution applying today's realities, facts and technology, facts and realities that existed while Clinton was Secretary of State which gave her the means motive and opportunity to do what she did but did not exist for anyone else between 1917 and 2008.

It will now be up to the Inspector General of the State Department to decide whether or not Clintons security clearances will be revoked for her irrefutable disqualifying violations of 5 applicable State Department guidelines that disqualify someone from a security clearance. Those disqualifying guidelines are specified in paragraphs b,c,g,h,i  of Section K on handling protected information which can be read here.

There will be no need to review Clinton's security clearances for a precedent because the guidelines which were written in 2006 are so specific and apply to Clinton's violations, conduct and behavior with such specificity you would think they were written by a Republican committee member two weeks ago just to apply to Clinton.

As Comey pointed out, in spite of deciding not to prosecute, just because he found no precedent to charge Clinton with one or more felonies,(error or not) that did not mean there would be no consequences for someone who did what Clinton did and Comey mentioned security clearance sanctions as an example.

If Clinton's security clearances  are revoked it will have almost the same effect as her being indicted. It would be impossible for her to run for president in spite of many of her supporters who think it would be ok even if she had to wear an ankle bracelet and report to a parole officer while president.

If on the other hand Clinton's security clearances are not revoked when any State Department employee with  the same violations based on established guidelines would have not only been fired but had all their security clearances stripped, if after all of  Clinton's deliberate and intentional disqualifying violations along with her repeated public lying about those violations and her refusal to cooperate with the Inspector General, if  after all of that her security clearances are not revoked as they would with anyone else,it would be the biggest breach of public trust in government since Watergate. And that would not be a  comedy of errors, but a tragedy. For the whole country. And for the future.
Posted by Marc Rubin at 10:28 AM