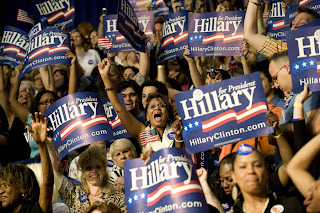 Adam Nagourney is the lead political writer for the New York Times. He is supposed to be pretty good. Emphasis on the words "supposed to be".

In writing about the Democratic convention and the upcoming fall campaign, Nagourney wrote on the front of page of the Times:

"The party ( Democrats) is not as united as they were four years ago but Democrats are finding common purpose in denying Republicans control of the White House and congress next year".


The latter part of his statement is true. In spite of disgust with Obama and the weak-kneed spineless political approach of congressional Democrats and their consultants that many are now talking about,  rank and file Democratic voters are willing to hold their nose and vote for Obama to keep a different set of destructive liars from replacing the more benign liar presently in the White House whose catastrophic four years in office has more to do with what he could have accomplished and didn't rather than anything he did to the country as was the case with the administration of George W. Bush.


But it is Nagourney's opening sentence, " the party is not as united as they were four years ago..." which indicates that four years ago Nagourney was either on drugs, in a coma, is simply lying, has severe memory loss or just decided to make stuff up because as someone who was integrally involved in the Democratic primary campaign as Executive Director of the Denver Group, I can tell you that Barrack Obama was easily the most divisive Democratic candidate for president in the history of the Democratic party.


There was no unity among Democrats four years ago. It is safe to say that Hillary Clinton supporters, which made up more than half of all Democratic primary voters, despised Obama and his supporters and what they saw was his and their underhanded political tactics. This contempt for another Democratic opponent was never seen before in a Democratic primary.

The dislike for Clinton and her supporters by Obama supporters was mutual. Obama supporters were calling Clinton supporters racist, and Clinton supporters were calling Obama and his supporters underhanded,  misogynists and a fraud.  I was told stories by grassroots Democratic actvisits on the ground going door to door that they never encountered such anger at a Democratic candidate,  especially in industrial states like Pennsylvania and Ohio,  as they did the anger many Democrats had towards Obama. And what made Clinton supporters resent Obama and his supporters even more was how the issue of race was used as a weapon against anyone not supporting Obama. If you didn't support Obama, the line went, you were a racist. This increased the tension and hostility that existed between the two camps to a fever pitch.


Clinton supporters also despised the biased  news coverage Obama received whenever the media  turned a blind eye to Obama being caught in a lie ( which was often), and resented how the media he fawned over him and ignored his history of lying, reneging on promises and having accomplished nothing in 11 years of political office.  Instead of objectivity and doing their best to inform the electorate,the media  had a clear agenda, which included getting caught up in the emotional and symbolic aspect of electing the first black looking president ( most of Obama's supporters using race as their agenda insisted on ignoring the fact that Obama's mother was white). The problem was, this was no Colin Powell.


Neither Obama nor Clinton ended the primary season with the necessary 2/3 delegate majority with Obama finishing with a 65 delegate lead, mostly gained through the caucuses, and Clinton with a slim majority in the popular vote. This in spite of writer Jonathan Alter and Keith Olbermann using their platforms in the media to  try and force Clinton out of the race months earlier,  with Alter  writing that Clinton should get out ( after she had landslided Obama in the Ohio primary) because according to Alter, she had no chance even though she had landslided Obama in 13 of the 15 largest and most populace  states in the country and won 14 of 15. "Do the math" Alter wrote, showing he was as lousy at math as he was political observation. But pretty good as a political hatchet man.


Nancy Pelosi, Howard Dean and Donna Brazille, not exactly people you want to ask for political advice given their track records, were so afraid of an open convention, the kind that finally gave the nomination to FDR after 5 ballots in his first run for the presidency, that they tried to force Hillary Clinton off the ballot, which is what inspired the formation of the Denver Group and the ads and TV commercials I created designed to thwart that attempt which succeeded to a large degree.


There was such little unity in the Democratic party,and at the Democratic convention, it was so contentious, there was so much mutual hatred between Obama supporters and Clinton supporters that the number one concern on the minds of the Pelosi ,Dean and Brazille and others in the DNC was to do everything they could to try and project at least the appearance of  party unity,  mistakenly fearing that a contentious convention would cost them votes in November. But Clinton supporters resented this as well and polls showed that a large segment of Clinton supporters were telling pollsters they wouldn't vote for Obama. Obama was also having a terrible time getting big money Clinton donors to donate to his presidential campaign.


There are more war stories to be told around the 2008 Democratic primaries, the most contentious and divisive in the history of the party, but if there was one thing the primary season and the Democratic convention did not have was unity.


The main point is that Adam Nagourney, the chief political writer for the New York Times is either still under the self -delusions the press fostered during the 2008 primary season and Democratic convention or is simply making stuff up.


It also should be remembered that Nagourney has people who have this little function called "editors" at the NY Times, which presumably include Jill Abrams the executive editor or at least someone she hired who read this nonsense by Nagourney about Democratic unity four years ago and let it go. On the other hand since Times writers and editorialists like Gail Collins were a big part of the problem in 2008, distorting and corrupting the news in support of Obama, its possible they are not about to admit their shortcomings now, especially since Obama has proved to be such a disaster as far as the Democratic agenda was concerned. So Nagourney's fantasy about Democratic unity in 2008 was allowed to stand.


It is, unfortunately, another example of why journalism has fallen into such disrepute, how useless they have all become, primarily because of their lack of standards, ethics, and ability,( which was why what the press did to Joe Paterno and the damage they caused with their journalistic dishonesty became an issue worth taking up), and in the end, the worst of it all is that the Times, like most other journalistic outlets simply can't be trusted. And that, as the founders knew, can be a threat to democracy.

Having won in 2008 with Obama, the narrative is being re-written by the victors to overlook the details.

It did not help that the columnists Maureen Dowd and Gail Collins were enthralled with Obama and trashed Hillary. I think that they have buyers remorse, but they cannot admit being taken in by the con man Obama.

I once considered myself a Democrat, now I say that I am a liberal. I will vote for Obama this time because he seems to be the lesser of two evils.

This article is spot on in recounting the events of 2008.

That primary, and the heinous actions of Obama, his supporters, and the DNC caused a large number of us Hillary supporters to leave the Dem Party. Many of us will not, under any circumstances, vote for Obama.

Many so-called journalists have destroyed their reputations and credibility, by functioning as cheerleaders for Obama. Worse, they violated the public trust, and relinquished their roles as guardians of democracy, preferring instead, to act as guardians of Obama.

Thanks for this reminder of the 2008 primary from hell. We should never forget how democratic leaders assaulted democracy, and gifted the nomination to Obama.

"Fair reflection"... I've never personally observed the Democratic Party being so corrupt as 1) during the Rules and Bylaws Committee meeting on May 31, 2008, and 2) when attacking Bill Clinton as a racist for telling the truth about Obama not opposing the Iraq War (he wasn't a member of Congess - his claim was a "fairy tale") It's hard to care that the repubs are accused of lying. Compared to ...?

913 ensalsocAs a former 45 year registered and activist Democrat from Ohio who voted for Bill Clinton twice and for Hilary in the primary I will never ever forget what happened in 2008, especially in the Rules Committee. I will now be a registered independent for the rest of my life.

Thank you. We must never forget this happened. It was outrageous.

You should have used substituted one word in this sentence--"mostly GAMED through the caucuses". The reports of intimidation and fraud in the caucuses were also unprecedented and largely ignored by the media and the Democratic Party. So many aspects of that primary were just shameful.

I'm not going to hold my nose and vote for Obama-if I'm going to get GOP policies the next four years (and we will, whoever wins) I'd rather they come from a Republican.