How the media's failures with 911 changed presidential history. 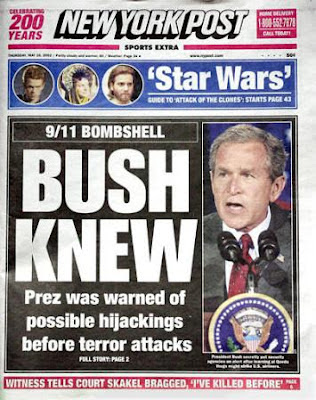 As the November elections approach and with the anniversary of the 911 attacks having just passed, its worth considering how different the world, the United States, and the upcoming elections would have been had the press in this country not run from its responsibilities and obligations regarding the facts surrounding 911 and, instead of going into hiding and being their usual spineless selves had reported the facts exposed during the 911 Commission hearings and held George W. Bush accountable for his failures in not preventing the worst attack on American soil by a foreign enemy in American history when it was easily preventable.


As the 911 Commission hearings exposed, the real intelligence failures were not at the CIA or other intelligence agencies but at 1600 Pennsylvania Avenue where Bush and Condoleeza Rice were given more than enough information to have prevented the attacks but didn't because they dismissed terrorism as a real threat and ignored the warnings until it was too late.


The Commission hearings revealed so many failures on the part of George W. Bush regarding terrorism that, had the press held him as accountable for 911 as much as they did Anthony Weiner for pictures of him in his underwear, the course of history would have changed both in terms of policies, results and presidential politics.


It was learned, for example, that the first thing Bush did upon taking office in his first decision related to terrorism was to demote the head of White House anti-terrorism, Richard Clarke, from the cabinet level position he held in the Clinton administration to a sub cabinet level position cutting off his direct access to the president. Bush also did away with the Principals Meeting, a meeting chaired by Clark on a weekly basis attended by the heads of all the intelligence agencies where the latest information garnerd by these agencies on Al-Qaeda was shared

The 911 Commission hearings also revealed that in the summer of 2001, the intelligence relating to an Al-Qaeda attack against the United States was so alarming, George Tenant, CIA Director requested an emergency meeting with Rice in July to communicate the urgency of the threat. Rice was so dismissive of Tenent's concerns she didn't even remember the meeting though White House logs proved it took place.


But perhaps the most damning evidence of Bush's failures was that on August 6, 2001, in the president's classified daily intelligence briefing, Bush was told that Al-Qaeda going to strike in the United States, that there were 50 identified Al-Qaeda cells already in the United States and that part of the Al-Qaeda plot to strike within the United States involved the hijacking of US airliners. Bush was also told that Al-Qaeda had office and federal office buildings in New York City under surveillance, indicating those could be targets. Bush dismissed the intelligence reports and took no action.


Richard Clarke was so disgusted with the Bush Administration's lack of response to terrorist warnings and intelligence he wanted to resign but the resignation was not accepted. Testimony from both Clarke and George Tenent was that in August of 2001, intercepts of Al-Qaeda chatter had risen to the highest levels Clarke had seen in twenty years, and further evidence showed that the translation by the CIA of one of the Al-Qaeda messages in August of 2001 was that the United States was about to be hit with a major terrorist attack, that the attack was "imminent", and in the words of the CIA memo the attack was going to be "spectacular". This information was relayed to both Bush and Rice. They did nothing.


Clarke testified that the intercepts of Al-Qaeda traffic were so convincing that the United States was about to be hit with a major terrorist attack that he said both he and George Tenant were "running around the White House like men with their hair on fire" trying to get Bush and Rice's attention and to convince them a major attack was imminent. Bush,still on vacation in Crawford refused their requests to meet with them and both he and Rice ignored the warnings and did nothing.


After the attacks both the press and the Democrats went into a shell. The Democrats as usual, were afraid of attacking Bush and the Republicans for possibly the worst national security failure in history and all because of Bush's gross negligence in ignoring the information he was given . It was the same for press wh showed their usual lack of backbone when it counted the most and in terms of accountablility by the news media, did not hold Bush as accountable for 911 as they did did Anthony Weiner for his pictures of him in his underwear.


The same, ironically was true for the Democrats. When it came to Weiner and his underwear, Obama, Nancy Pelosi, and Harry Reid had no problem sayng he should resign. When it came to Bush's failures and negligence in the 911 attacks Democrats said nothing.


Along with Bush the 911 Commission raked FBI Director Louis Freeh over the coals as well for also bungling and mishandling anti-terrorist intelligence given to him by the CIA. When two of what would be Al-Qaeda hijackers who were being tracked by the CIA landed in Los Angeles, the CIA could no longer follow them since they cannot by law operate within the United States. They gave the names and whereabouts of the two terrorists to Freeh at the FBI along with the warning that they believed the two had entered the country to commit a terrorist act. Freeh labeled the CIA request for surveillance of the men "routine" and because of that it was ten days before the FBI sent agents to try and find them. The date that Freeh first began to act on the information given by the CIA was Sept 10, 2001. Because of this and other failures Freeh was forced out as FBI director, but like Bush, was not held appropriately accountable by the press even though he was publicly humiliated by Commission Chairman Tom Kane who eviscerated Freeh for his multitude of failures when he appeared before the commission as a witness.


Had the failures of George W. Bush and Condoleeza Rice and others in the Bush administration, not just failures actually but gross negligence, been reported by the news media, had they been held accountable for the failures and their negligence which failed to stop the 911 attacks when it could have easily been prevented, the course of history and presidential elections would have changed.


With those failures exposed by the press and Bush held accountable, Bush never would have won re-election in 2004 and Kerry, who lost a close election, would have surely been elected. History would have been very different.


Yes, Kerry and his political strategists deserve a lot of blame for not holding Bush accountable for 911, as well as for the disaster that was unfolding in Iraq at the time, two of the most legitimate campaign issues in history. But it was the press who had the primary responsibility to report the truth. Ironically it was the New York Post ,a newspaper owned by conservative Rupert Murdoch, who ran the most explosive and damaging headline about Bush's intelligence failure. In huge white type on a black background, the Post ran the headline "Bush Knew!" talking about the revelations contained in the August 6, 2001 intelligence report that told Bush that the Al-Qaeda plot to attack the United States from within would involve the hijacking of US airliners and that buildings in New York City were under surveillance.


Had Kerry won in 2004, this would be the end of his second term and it's hard to know who the election this November would have been between. But the disaster and the selling out of Democratic policies that would have had huge benefits for the country, the relentless caving in to special interests and overall lack of accomplishment over the last four years by Barrack Obama would not have happened and the country might not now be facing possibly the two worst presidential candidates in history. But it all did. Thanks to the press.

NOTE: There is an irony now in Democrats accusing Romney of politicizing the events in Libya by his criticism of Obama and his foreign policy. The Democrats, foolishly, refrained from criticizing Bush over 911, perhaps afraid that Republicans would accuse them of politicizing the event. Though there is no comparison in terms of enormity of the event, Democrats are now furious that Republicans are not doing the same.