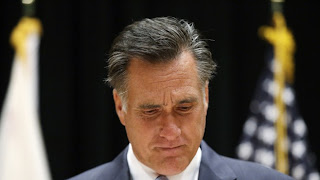 While Democrats generally are right in almost ( not all) every case when it comes to policies that prove to be the best thing for the country AND the constitution, ( though they failed miserably when they allowed Obama to sell out real healthcare reform and the public option to health insurance lobbyists and paid the price in the 2010 elections) when it comes to politics Democrats and their strategists are the biggest collection of empty headed, lame incompetents in the history of world politics. They are easily as incompetent at politics, formulating a strategy, a message, targeting it, and communicating it as Republicans are at governing.


Romney's latest insult to half the country, the people he says who don't pay taxes and are consequently Obama voters who see themselves as victims who don't care about their lives, has given the Democrats another in a long line of grand opportunities to rout the Republicans on election day. In almost every instance since 2000, the Democrats have blown every one of those opportunities and only won in 2008 because Republican job performance during the Bush years brought such catastrophe on the country from 911 to massive economic failure that the country was not about to give Republicans more time or more rope to screw the country. So it was more a matter of Republicans losing than Democrats winning. Naturally even given that great opportunity Democratic politicians,like Pelosi and Donna Brazille, found a way to lose and blow that too by slanting, even rigging the 2008 primary process and Democratic convention to give the nomination to Obama who promptly went out and squandered the biggest congressional majority any president had in 60 years.


So far, the response to the Romney video which, in a world where Democratic strategists, if they had any who knew what they were doing, could put an end right now to Romney's chances of winning the election, has been, as always, lame, empty and incompetent, starting with the usual lame, empty vacuous statements coming from the White House.


We know what Romney said about the 47% of voters who pay no income tax who, for that reason, are supposedly Obama and Democratic voters, (statistics show about 4 out of 10 of those voters have voted Republican)  but so far not a word from Democrats about corporations who pay no taxes something Romney and Republicans have always supported.
Not a word comparing Romney's comment that corporations, including those who pay no taxes are "people" while, according to Romney, people who pay no taxes ( and vote Democratic) see themselves as victims who are on the dole.  And as if they needed more help, a senate committee today released information that Microsoft and HP, to name two corporate people in Mitt Romney's world, avoiding paying more than $4 billion in income taxes by moving accounts off shore and taking advantage of other corporate loopholes.
Richard Trumka, president of the AFL-CIO was one of the few voices on the side of the Democrats who got tough and said Romney's statements "spit in the faces of half the country". Trumka gave the Democrats more genuine soaring rhetoric in 30 seconds than they've had in four years of Obama in the White House.  What was Obama's response. He said of Romney " obviously he hasnt been around". Scathing isnt it?


There is no rational reason why Romney's comments shouldn't put an end to his candidacy on a number of different levels and win the Democrats control of congress as well as the White House ( as sad as that is given the choices).  Except when you have a president whose response is, " It suggests that he ( Romney) hasnt gotten around". Compare that to the harsh criticism Romney's comments has elicited from Republicans. Which is one  more example of the embarrassment that is Obama and why during his first four years in office little to nothing of any real merit ever got done

The problem is when you have no convictions or principles its hard to get mad at something that offends them. So its understandable why Obama has so little to say.   It remains to be seen if other Democrats who do have principles and convictions are willing to stand up and fight back. And just as importantly, to  show that they know how.

Tim Kaine Democratic candidate for Senate in Virgina highlighted the criticism here of Democratic political stupidity in response to Romney's self-destructing comments on the 47% who pay no income taxes as deadbeat Obama voters by saying he would be "open" to a plan that would force all Americans to pay some level of income taxes.


Kaine, in response to a question asking him to comment on Romney's remarks and the controversy surrounding them said:


"I would be open to a proposal that would have some minimum tax level for everyone".


This comes on the heels of a senate hearing that showed Microsoft and HP avoided paying over $4 billion in income taxes by taking advantage of tax loopholes and moving a substantial number of accounts off shore.

I was saddened to learn that you started drinking the Democratic Kool-aid.

Tell me how the Republicans are worse:


first, I am not defending Obama or his administration.The ACLU has already said Obama's record on civil liberties is, in their words, "disgusting" and it is. No better than Bush and in some ways worse.

But to answer your question, the Republicans and the far right are worse on every issue. First they reek of hypocrisy. They talk about keeping the government out of people's lives when it comes to healthcare but want to force women to take unwanted pregnancies to term, have passed laws requiring unncessary vaginal ultra sounds in some states before a woman can get an abortion and would do away with most civil liberties in the name of national security if they could.

Economically, you can fault Obama for not doing as much as he could and for being dishonest, spineless and a whole lot of other things but the economic problems in the country are ALL 100% the fault of Republicans and Bush and their policeis between 2000-2008. Evertyhing they did which was all based on their failed ideology turned out catastrophic for the country. I could go on and on including Romney's decision to pander to the extreme right, and the Tea Party whose ideas about America have nothing to do with anything truly American but are more facist than democratic. They are part of the problem and slapping them down and having the country reject them in a big way in this election both for the White House and the congress is really the first step in solving the problems, first to give Obama some much needed backbone and to put an end to Republican obstructionism.

Actually you are defending Obama & his administration by trying to pretend the policies that got us into this economic mess is 100% the fault of the Republicans --as if there weren't Democrats in Congress who voted for all these polices (there were) and pretending the Clinton era Freddie & Frannie policies had NOTHING to do with the collapse of the housing marker (they did). It was BOTH parties that got us into this economic mess & trying to point to ABORTION ultrasound laws in a few states (as b.s. & invasive & as wrong as they are) to the US President's decision to routinely use DRONES TO KILL US CITIZENS shows how compromised your thinking is.

Clinton left the country with a $5 1/2 trillion budget surplus that the Republicans and Bush blew in less than 3 years something Paul Volcker, chairman of the Fed under Reagan said was mind boggling.

Clinton left the country with a balanced budget. Bush and the Republicans blew it and sent us back into deficits by being the first president and congress in history to cut taxes and take the country to war at the same time. To call that stupid is understating it.

These tax cuts, the destruction of the balanced budget and zero deficit by the Republicans, the blowing of the surplus (because it offended Republican ideology) were all accomplished without a single Democratic vote and it is these things and these things ALONE that are responsible for the economic mess we are in now. That and the Republican deregulation of banks that allowed them to almost collapse betting on derevitives in a housing loan shark scam that gave mortages to anyone able to breathe.

Given what they were left with when they came to power, its all the Republicans fault from day one of the Bush administration and their catastrophic and truly idiotic economic policies all of which were accomplished without any Democratic votes,especially the tax cuts which had to be passed using reconiciliation to avoid a Democratic filibuster, and differing from what you believe, Republicans like Senators Linday Graham and former Senator Judd after the Republicans were wiped out of congress in 2008 admitted as much.

Sorry Marc, but the problem with Obama is not a lack of backbone. That's what Vastleft calls a category error. Obama's problem is a mix of incompetence and corruption.

I am disappointed because I know you're not an Obot.

If Obama wins in November we'll get four more years just like the last four. Then we'll get a Republican who is far worse than Milquetoast Mitt the Moderate Mormon.

OTOH, if Romney wins the Democrats will suddenly remember that they care about the Constitution, civil rights and the rule of law. We can start working to elect a real Democrat in 2016 - maybe even Hillary.

BTW - Think about this:

If that isn't a red flag I don't know what is.