Bachmann gets buried, drops out and makes news media look even dumber. 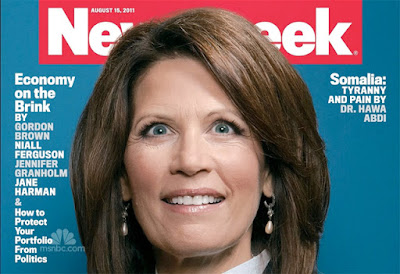 To the surprise of no one with a triple digit IQ or any judgement at all, Michele Bachman announced she is dropping out of the presidential race after finishing a dismal 6th in the Republican Iowa caucuses. What a surprise.

What everyone who does have a triple digit IQ knew from the beginning was that Bachman never had a chance to be the nominee in the first place, much less get elected president. But you'd never know it based on the coverage and attention she received at places like CNN, MSNBC, the New York Times and other news organizations.

She received more coverage than any other Republican candidate including Mitt Romney. She even made the cover of Newsweek, more for her freak show value and to sell magazines than for anything meaningful. Because the news media, as always. is much more interested in the freak show than in serious journalism or doing what thFounders intended with the first amendment -- inform the electorate. Which is probably the single biggest reason the large majority of the electorate has abandoned them and why their ratings and circulation continue to shrink. They live for the freak show.

Michelle Bachman has been that freak show, a bumbling, mind numbing self-proclaimed candidate who didn't know American history from Lithuania, who made some of the dumbest comments and speeches ever uttered by a so called presidential candidate and had ideas and a point of view so vacuous they made almost everyone laugh.

But you wouldn't know it by the press coverage. In another time and place Bachman would have gotten little or no coverage at all. Its hard to imagine Walter Cronkite or David Brinkley or the New York Times of 30 years ago taking Bachman seriously. the odds of her making the CBS Evening News with Walter Cronkite would have been about zero. But with this current crop of journalists and editors when Bachmann spoke, the news media sat up and made it front and center.

Now, in her first real test to see if anyone outside the media really took her seriously, the people she was trying to appeal to the most -- conservative Republican voters in Iowa --said no, we don't take you seriously.

Which leaves Newsweek, CNN and other political commentators who pretended to treat her like a serious candidate look like a bunch of scarecrows standing in an Iowa cornfield with crows on their heads and corn coming out of their ears.

And they wonder why their ratings and influence keep declining.
Posted by Marc Rubin at 4:58 PM