What to do about a dishonest,incompetent news media. 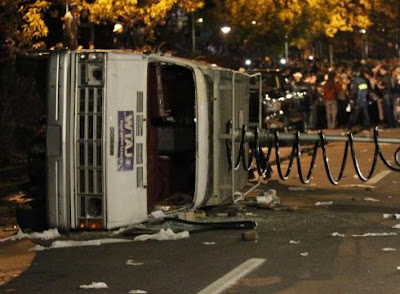 The recent barrage of lies, fabrications, dishonesty and non-existent journalistic standards that comprised the media accounts related to Joe Paterno,what he knew and what he did and did not do, is unfortunately, nothing new. Lies, distortions, omissions and shoddy journalism been standard operating procedure by the main stream news media in the areas of politics, public policy and issues as significant as war, impeachment and presidential elections for at least the last 15 years. It happens on big issues and small issues, on issues that do damage to individuals and issues that do damage to the country.

The Joe Paterno fiasco which included journalists like Sean Gregory at Time Magazine, Jason Whitlock at Foxsports.com, Jemele Hill at ESPN.com, the editors at the Philadelphia Daily News and a host of ESPN commentators, committing outright acts of libel in their reporting, making blatant factual misrepresentations, distortions and outright fabrications they knew they had no facts to substantiate, and the fact that in almost every instance the opposite of what was being reported was true, left not just a lot of people, but the majority of people who did know the facts, not just furious at the news media but disgusted and fed up and in the case of some Penn State students, inspired an anti-news media riot.

Joe Paterno has stated that he is looking forward to getting his story out which when it happens will more than likely further blacken the eyes of the news media, but the question remains, what can be done about the low or non-existent journalistic standards and outright journalistic and intellectual dishonesty of the news media? Most people feel that Sean Gregory at Time, Whitlock at FoxSports.com and Jemele Hill at ESPN.com still having their jobs while Joe Paterno lost his, is a gross injustice and the kind of journalistic incompetence, dishonesty and  lack of standards that should cost them their jobs.

This isnt the first time the media has been guilty of this kind of egregious malpractice.They did it years ago with Richard Jewel calling him the Olympic Bomber without a shred of evidence. They did it during the Monica Lewinsky fiasco hoping to cash in on the scandal and aiding and abetting a senseless and time wasting impeachment.  On the other side of the ledger, they hid under a rock and did and said nothing when the 911 Commission uncovered evidence that the Bush Administration had ample information to have prevented the 911 attacks which succeeded largely due to gross negligence. And then there were the famous front page stories by Judith Miller of the New York Times, reporting on the certainty of Sadaam's WMD which helped make the case for war when we later learned that not only was there no real evidence of WMD but the information Miller reported was splashed on the  front pages of the New York Times were without any independent corroboration and, as it turned out,  was spoon fed to Miller by Dick Cheney's office.

The news media also chose to put their heads in the sand during the 2008 Democratic primaries when Barrack Obama, riding an emotional wave and a news media agenda to be the "first black president" was caught blatantly lying more times about more subjects than possibly any presidential candidate in history, all of it largely ignored by the media so as not to derail their preconcieved agenda.

Almost every problem the country has faced and faces now can be traced back to a news media too cowardly, too incompetent or too inept to do the job the Founders envisioned when they wrote the first amendment. Which is to keep the electorate informed with accurate and unbiased information.

The media fails at that constantly and they do it willfully. So the question becomes, what to do about it?

It should come as no surprise that media ratings, and ad revenue continues to fall as more and more people get disgusted with the media and simply dont trust them to do their jobs honestly and that falling revenue makes news media standards fall even further as that becomes their main concern.

A Pew Research poll a few years asked whether people trusted the news media, especially cable news and the results were predictable. For CNN, 69% of those polled said they didn't trust them to accurately report the facts. For MSNBC the distrust was at 70% and for Fox News 71%. By the way to show just how dishonest the media can be, CNN used those results to run an ad campaign calling themselves " The Most Trusted Name in News" and cited the Pew poll though they didnt cite the actual numbers. So if a news organization cant tell the truth about itself how can anyone expect them to tell the truth about the news?

In terms of  what can be done about it, the first step comes from the words of writer Paddy Chaefsky and his character Howard Beale, from the movie "Network" who ranted that people have to get mad, and when they do, they have to shout that they are "mad as hell and not going to take it anymore".

Once that stage is reached, and judging by reaction that stage was probably reached years ago, there is a lot that can be done.

During the height of the news media's Paterno fiasco, a reader here wrote that as a father of 3, and outraged by ESPN's dishonesty, incompetence, hypocrisy and in many cases outright falsehoods  in their reporting on Paterno, and knowing that Disney was the parent company of ESPN, he was canceling his family trip to Disneyworld. I suggested in response that he write a letter to Disney CEO Robert Eiger informing him of his decision and why.

Another reader scoffed at this reply calling it "laughable" that Eiger would care or that it would make a difference.

Having started my professional career in the advertising business creating and selling ad campaigns to national advertisers as both an art director and writer while working for some of the top ad agencies in New York and LA, I have sat in rooms with VPs of marketing and can tell you first hand that they care about even one negative letter much less 100 or 1000.  To those companies 1,000 complaints would be an earthquake. They care about their company's image, how people feel about their products, they care about how their company is perceived, they care about everything. Robert Eiger would not laugh at this father's letter. He would take it seriously. Which is why Eiger is where he is and the reader who called it "laughable" is where he is.

Letters, emails and phone calls, especially if they are organized to CEO's of parent companies or to the editors of news organizations like Time Magazine and their parent company Time-Warner, expressing one's anger and/or threats of advertiser boycotts are very effective. So are organized physical protests.

Republicans and conservatives are very good at organizing letter writing campaigns, angry phone calls and threatneing advertiser boycotts against media outlets. It wasn't too long ago they succeeded in getting Dan Rather fired from the CBS Evening News over the questionable authenticity of a document used in a story about the disdain George W. Bush's Air National Guard commander had for him and his belief that Bush had received special treatment because of his family name. The irony is that the commander's secretary confirmed as fact everything contained in the document but because there was some question about its authorship and authenticity, conservatives and Republicans sent a barrage of angry emails, phone calls, letters and protests to CBS News and Sumner Redstone the CEO of Viacom, the parent company of CBS. The result was Rather's firing.

In another instance, though not media related, a site called Bankrate.com reported that Bank of America decided to drop their plan to charge a $5 a month debit card fee largely because of the anger and outrage of a single person who organized hers, and the outrage of other Bank of American customers against the fee.

"Andrew Plepler, who has the long double-barreled title of global corporate social responsibility executive and consumer policy executive at Bank of America, earlier this week called Molly Katchpole, a 22-year-old Bank of America customer, who started the petition on Change.org, a do-it-yourself petitions web site protesting the proposed $5 a month debit card fee."

One person not only stopped the fee from going through but her efforts earned her a phone call from a top executive at Bank of America. So much for what is "laughable" and what even one person can do.

Change.org is one good place to start in organizing and communicating a protest to corporate executives or editors at news outlets. It's not unlikely that a petition, direct letters or emails to editors or parent companies by those unhappy with the news media treatment of Paterno for example, even to the point of demanding the firing of those most responsible for the sloppy and inaccurate reporting, would go ignored. Especially if the petitions containted thousands or tens of thousands,or, as in the case of Bank of America, hundrds of thousands of signers.

When TV and radio networks originally started their news divisions it was done as a public service. CEO's like Bill Paley at CBS took the first amendment and the reason for its existence -- to have an informed electorate -- seriously. The news divisions were not only not expected to make money, they were expected to lose money.

That all changed in the 80's when news became more of a business and money, ratings, and advertising revenue and fear of losing all three, began to drive network and cable news. Because of that, any threat to any of these things coming from one person or a large group, gets their attention. Because those in the news business know the saying that those who live by the sword die by the sword.

Along with Change.org as a place to start to organize a protest and be heard along with personal letters, emails and phone calls,  located here, on the right is a link to FAIR'S media list of names, street addresses, email addresses and phone numbers of media outlets around the country.

Email ThisBlogThis!Share to TwitterShare to FacebookShare to Pinterest
Labels: What to do about the news media

"When TV and radio networks originally started their news divisions it was done as a public service."

Wasn't it a requirement to get their license from the FCC back then? And if I remember correctly, there was some limited enforcement of the networks to assure it was a public service.

Thanks for link to Chnge.org - never heard of it before; and the the Fair Media list.

Wasn't it a requirement to get their license from the FCC back then?

I think youre right that there was a minimum requirement imposed by the FCC for news and public service but the networks went far beyond the minimum at the time especially durng WWII.

man... so much for the shoddy reporting