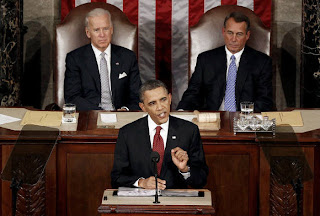 In the wake of President Obama's State of the Union speech the real question is, does anything Obama say matter? The only honest answer is no. Because Obama has proved, not just over the first 3 years of his presidency but throughout his entire political career, that he never means what he says, will say anything to anyone at anytime for his own political benefit, and has reneged on more promises and pledges and lied more brazenly about them than any president in history as the videos below will show.

When Barrack Obama used the word "audacity" for the title of his book in relation to his political ambitions it was probably the only time in his life he actually told the truth. Not because he had audacious ideas. He had no ideas that were his own. Not because he dreamt of audacious accomplishments -- he never accomplished a thing in 16 years of elected office going back to his days in the Illinois state senate where he spent 11 years doing nothing to such a degree his lack of accomplishment and initiative became a joke during the presidential primary campaign in 2008. But when it comes to audacity, he is without doubt the most dishonest and audacious liar to ever sit in the White House surpassing even Richard Nixon for that dubious honor. And so nothing he has to say, especially about his vision for the future, matters. It's nothing but in-the-moment politics to Obama.

Obama has always been a man of hollow political ambition, wanting elected office for the sake of having it not for sake of accomplishing anything and to that end, he lies consistently about almost anything of significance to appease whoever needs appeasement at the time, and has done so during his entire political career.

So while "progressive" groups are praising Obama's pledge to investigate and hold accountable the financial practices of the big banks that caused the economic crisis, one has to keep in mind that one of his most significant and damaging lies was about the single most important Democratic issue of the 2008 election and probably the last 40 years -- healthcare reform.

Obama lied more about health care reform than any president has lied about any one single issue since Nixon and Watergate as the videos below will show ( though George W Bush is not far behind in his self serving lies about why he couldn't prevent the 911 attacks when he had enough information to do so).

Obama's lying is so brazen that even his new campaign literature claims as one of his big accomplishments "getting health insurance for 32 million uninsured". It should be remembered that Obama's health care bill is the same one former DNC chairman Howard Dean said should be "junked". And the bill Tom Harkin,and other congressional Democrats could only say was "better than nothing".

The audacity of Obama's lie that he "got health insurance for 32 million uninsured", is nothing short of an insult to the intelligence of every voter in the country but its only one of many that Obama has gotten away with time and time again especially in the press who, from the beginning have decided to look the other way when confronted with outright lies coming from Obama because they didn't want anything to interfere with their narrative of electing the " first black president".

What Obama's healthcare bill actually does get is 32 million new customers for the insurance companies, the lobby he sold out to when he made a back room deal at the White House (as reported by the New York Times) with the for-profit health care industry to dump the public option. Though it is still an open question as to whether his mandate that the uninsured buy insurance will survive a Supreme Court challenge.

Not long ago, in a recent "60 Minute" interview, in a head shaking display of the audacity of lying, Obama essentially declared himself, based on what he called his "accomplishments" the 4th most accomplished president in history.

The right wing went ballistic as the right wing always does and with the usual lack of credibility because they would blast Obama if he said the sky was blue, but the real criticism should have come from Democrats, liberals, and so called "progressives", that political group that used to be called liberals but instead of standing up to Republican attacks on liberalism, changed their name.

With healthcare reform having been on the Democrats agenda for 60 years, and with Obama having the biggest congressional majority of any president in 60 years, and with having promised a public health insurance plan in his speeches and campaign literature since 2007, and with a public option being overwhelmingly supported in every poll by a huge majority of the American people, passing it should have been a snap. For any other president except Barrack Obama.

After making his backroom deal to dump the public option, Obama continued to publicly support it in speech after speech, including his 2010 State of the Union message, and in televised town hall meetings. Privately he instructed Harry Reid to dump it from the final bill even though 55 Democratic senators had publicly proclaimed they would vote for it in reconciliation.

After the bill passed, Obama claimed in an interview with Jim Lehrer on PBS that he had gotten "95% of everything" he wanted in the bill. When Lehrer pointed out the bill had no public option Obama replied, " I never campaigned for a public option".

That audacious lie set off a barrage of indignant responses from Democratic commentators. But not enough to matter because the same groups who attacked Obama for that audacious lie didn't have the guts to stop supporting him, hold him accountable and pressure the DNC to encourage Democratic challengers to Obama in the 2012 primaries. Instead the DNC has embraced Einstein's definition of insanity -- doing the same things over again and expecting different results.

Health care reform isnt the only one of Obama's outright lies. One could easily fill a book with them. He lied incessantly during the 2008 Democratic primaries about what he knew about Jeremiah Wright's anti-American diatribes until You Tube videos started to surface proving that he was lying. Having his political back to the wall is what motivated giving his "major speech on race," a vacuous,self-serving and empty speech only the most easily conned, which usually includes news media, didn't laugh at it. At the time, former Democratic New York city Mayor Ed Koch commented that Obama threw his own grandmother under the bus in the speech.

Obama has been caught lying almost from his first days in office. When the public was outraged to learn about the huge bonuses AIG executives were going to receive after taking billions in tax payer bailouts Obama publicly said " I share the public's outrage". What he didn't say was that he not only knew about the bonuses more than a week in advance, he actually approved them. Making his "outrage" as dishonest as his claimed ignorance.

And during the 2008 primaries in Ohio, he was caught in a lie so outrageous and manipulative it would have ended the political career much less presidential candidacy of any other candidate.

That happened in Ohio where Obama told the unemployed in a state that had lost 280,000 jobs before the economic crisis that NAFTA was at the heart of their problem ( something Politfact.org said itself was a lie) and he promised the unemployed in Ohio and those afraid that they might next, that he would get rid of NAFTA if he were elected. At the same time, he sent Austan Goolsbee his economic advisor to the Canadian embassy in Chicago to tell them to ignore everything they were hearing about Obama getting rid of NAFTA, he has no intention of getting rid of it, that what he was saying publicly was just politics.

It is now 2012 and Obama is up for re-election, and lying about his "accomplishments" and making statements and promises that mean nothing. There are very few Democratic and independent voters left who are gullible enough to believe anything he says and whether they will vote to reelect him will depend on who the Republican nominee is. Assuming that its Romney Obama has virtually no chance of re-election.

Even Democrats know that Obama has been a president who has conducted his presidency with less conviction and principle than probably any other president in history, as the videos below will show. Something more important to remember than anything Obama had to say in the dog and pony show known as the State of the Union message. And now, after the State of the Union, is as good a time as any to be reminded.

I find it ironic that we could probably have a spirited debate on which Obama mistruth is the most egregious.

You say healthcare, followed by NAFTA, I say it's the homeowner foreclosure issue and HAMP.

It could also be the alleged Osama Bin Laden assassination. Spin was that they couldn't show an after the fact photo, how about one before Osama was shot?

Then we were told that the navy seals involved in the Obama caper were all shot down just two weeks later? Really?

What about Obama taking credit for the Lily Ledbetter Act and for the credit card reform act? The Credit Card Reform act was supposed to have already been in place before Obama was elected.

Except that Nancy Pelosi let the credit card bill die in her house in 2008 after receiving VISA IPO's that apparently doubled in value soon after Pelosi purchased them.

totally love your articles and agree completely with this one. However the republican field is a huge mess and Mitt will not have a chance in hell of beating Obama. Not that he would be any better. I think it is vast republican conspiracy to re-elect Obama. After all he is their dream a DINO who can end medicare and social security . Mark my words unless there is an independent candidate for president Obama will win and end medicare (except perhaps in name) .

".. Mitt will not have a chance in hell of beating Obama."

I have to disagree. More than half of Democratic and independent voters are fed up with Obama and Romney was elected governor of Massachusetts, a very Democratic state, twice. Voters in Mass as well as others who looked at it also said that Romney's health coverage plan that was enacted in Massachusetts was far better than Obama's, something Romney took a lot of heat over from conservatives.

Romney is almost certain to get the nomination and I think he will landslide Obama since he has proved he can win Democratic states. What becomes important is that the Democrats retake the House and hold the Senate. A Democratic congress and a Romney presidency is liable to be far better than an Obama presidency with a Republican congress.