How many Republicans does it take to unscrew light bulb efficiency standards? 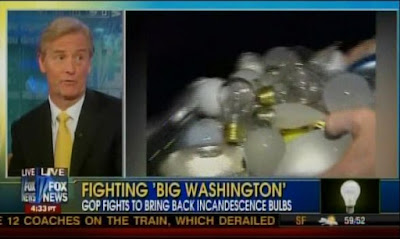 In a move so trivial and inconsequential many members of congress are too embarrassed to talk about it, and a move which escaped scrutiny by the mass media since it had nothing to do with sex, Republicans in the House, as part of the budget extension deal that averted a government shut down, insisted on including language that eliminated the ban on incandescent light bulbs that was due to go into effect on January 1. The ban the Republicans scuttled was actually part of an energy efficient initiative signed into law by George W. Bush in 2007.

Supposedly this conservative uprising over the ban on incandescent light bulbs began on -- where else -- conservative talk radio who seemed to feel the bulb ban was a threat to personal freedom. And many Republicans in the House agreed..

So Republicans, sensing the threat to our freedoms that the phasing out of incandescent bulbs represented in favor of new energy efficient bulbs, banded together and drew a line in the sand, insisting on language that blocked the energy efficiency standards from going into effect January 1.

This, they claim, was necessary to keep government interference out of the living rooms and light sockets of America and to preserve the freedom of choice they believed was the right of all Americans when it came to light bulbs.

So Republicans and conservatives are fanatically pro choice. When it comes to light bulbs.

They insisted that the government had no business interfering with a person's right to choose an incandescent bulb no matter how inefficient they are. For them it was a matter of principle and how much control the government can and cannot have over a person's life. When it comes to a person's freedom of choice, light bulbs yes, pregnancy no.

The Republican's "keep your government hands off my light bulbs" initiative succeeded, and the energy efficiency standards set to go into effect January 1 have been rescinded. Rescinded even though the major manufacturers of light bulbs began phasing out the incandescent bulbs long ago in anticipation of the 2007 standards going into effect.

So while the country continues to struggle with unemployment, a stagnating economy and huge deficits, Rep. Greg Walden, a Republican from Oregon said about the light bulb issue:

"There are just some issues that grab the public attention. This is one of them. It's going to be dealt with in legislation once and for all".

That's what he said. Really. And this came from a Republican congressman from, of all places, Oregon, the same Oregon where Republicans and conservatives called environmentalists trying to save the forests in Oregon "tree hugger"s. Who knew they would turn out to be light bulb huggers?

Its also hard to know if Republicans were getting pressure from groups on the Christian Right who believe the words in the Bible "let there be light" mean incandescent or those  interpreting it to mean a natural right to any light a person wants.

Democrats could have taken the light bulb issue and made Republicans look like idiots while scoring huge political points if they had Democratic political strategists, commentators and elected officials in congress who weren't so busy making themselves look like idiots when it comes to politics.

So the second joke becomes, how many Democrats does it take to cave in to Republican efforts to unscrew efficiency standards? The answer is always the same:  three. The same three that are always caving in to something. Pelosi, Reid, and of course, the one man mining disaster himself, the sanctimonious impurist, Barrack Obama.

So now, thanks to the light bulb issue, we now have two new categories of jokes to add to the lexicon - "Republican Jokes", and "Democratic Jokes" . The problem is that most of the country don't think either are very funny. Because the energy standards which would have made light bulbs 30% more efficient, still provided for light bulb choices that were more than adequate.

It's our current choices for president and congress that are inefficient.
Posted by Marc Rubin at 12:24 PM

Email ThisBlogThis!Share to TwitterShare to FacebookShare to Pinterest
Labels: How Many Republicans does it take to unscrew light bulb standards?

There are other issues at play here. Some people can get intense migraines from certain light frequencies yet be perfectly fine at others.

As for energy efficiency, while there is truth to this, in colder temperatures, lights put out something like 80-90 heat and the rest is brightness, but in cold weather, that is not necessarily a bad thing as it can help prevent the house furnace from going on as often.

I discovered your web site via Google while looking for a related subject, lucky for me your web site came up, its a great website. I have bookmarked it in my Google bookmarks. You really are a phenomenal person with a brilliant mind!