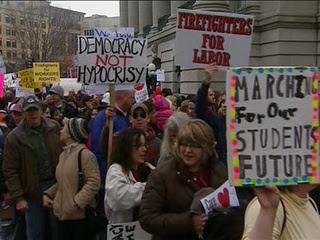 Scott Walker has a lot in common with George W. Bush. Bush lied the country into a war with Iraq by lying about the connection between Sadaam and the 911 attacks, and by lying about WMD in Iraq even though there was no hard evidence that it existed. What Bush really wanted was to invade Iraq and get rid of Sadaam and he was willing to use 911 as an excuse to see it done.


Walker is doing the same now with the unions in Wisconsin. We know for a fact that Walker is using the budget problems in Wisconsin as an excuse to do what Republican politicians all over the country want to do if they can -- bust the unions. They want to do it for a number of reasons, not the least of which is to undermine the political support Democrats gets from unions. They also want to do it because they are the party of big business at the expense of working people.

The biggest reason we know Walker is lying about the need to pass the union busting Wisconsin bill is because from the very beginning the unions said they were willing to sit down and talk and negotiate to make concessions to help with the budget problems. Walker refused. Negotiating a solution is not what he wants. What he wants is to strip the unions of their negotiating rights because that's where he is philosophically and the budget problems give him the cover he needed. Or so he thinks.

If Walker needed concessions from the unions they were unwilling to make, stripping them of their negotiating rights might have had some sympathetic supporters as a last resort. But Walker made it the first resort not the last. He doesn't want concessions from the union because that would take away his excuse for busting them. And that is the whole point. And the same is true with John Kasich in Ohio. Its about busting unions and using the budget problems which, by the way were the result of 8 years of incompetent Republican fiscal policy as the excuse.

Its nice to see Democrats in Wisconsin doing something that national Democrats seem to have lost the stomach or the will to do -- fight for something that they believe in without compromise and make it stick.

Congressional Democrats folded when it came to Obama's concessions to Republicans on the tax deal that added $800 billion to the deficit. They folded on Obama's sell out to Republicans in dropping the public option on healthcare. They folded on every sell out Obama made and they paid the price last November. So it's novel to see Democrats in Wisconsin refusing to budge on an issue that is clearly an attempt to use economic problems as an excuse to bust unions.

Senate Democrats in Wisconsin need to continue to stay away. Let the deadline pass and call Walkers bluff. And if Walker has to lay off workers let him do it. Then the Democrats can do something in Wisconsin that Obama and congressional Democrats seem to have been unable to do for the last two years -- hold Republicans accountable for their own actions and the mess they always seem to create.
Posted by Marc Rubin at 4:40 AM