Egypt: Why Obama should just shut up. 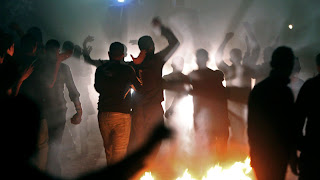 A day after Obama made what most analysts called even before he made it, a senseless unnecessary public statement on Egypt, the opposite of everything Obama called for has exploded.

From the beginning it was clear that Obama just didnt know what to say and everything he did say turned out wrong.

At first he seemed to support Mubarak while at the same time acknowledging the rights of the Egyptians demonstrators to protest. That angered many Egyptians who wanted Mubarak out immediately and felt Obama and the U.S. were supporting Mubarak. More than one analyst claimed that Obama's position would show him on the wrong side of history.

Then the demonstrations escalated, became violent and Obama seemed to reverse his position without saying so, saying that the transition in Egypt should happen now.  It was Obama once again talking out of both sides of his mouth and managing to alienate everyone. Obviously the demonstrators no longer trusted him and now Mubarak doesnt trust him and practically said as much in an interview with ABC News where Mubarak said Obama doesnt understand Egyptian culture.

Analysts and journalists were virtually unanimous is their feeling that there was no reason for Obama to make the statement that he did the second time, saying that there must be a transition now. What does that mean? He did not say Mubarak should step down now, even though presumably he knows how to mouth those words. So if he isnt calling for Mubarak to step down now which is what the demonstrators want, what exactly is he calling for?
In his February 1st statement, Obama said, " it is my belief that a transition in Egypt must be meaningful, peaceful and it must happen now".

No one knows what kind of transition he is talking about, nor what "meaningful" is supposed to mean.

Obama had a 30 minute phone conversation with Mubarak prior to his statement,  but whatever was said, only a few hours later, pro Mubarak demonstrators were on the streets throwing Molotov cocktails.

These are the same people Richard Engle of NBC News said he had witnessed over the years stuffing ballot boxes for Mubarak in rigged elections. They were trucked to the sites of the demonstrations and began throwing rocks and Molotov cocktails. Automatic weapons fire could also be heard and there have been reports of serious injuries. All at the hands of Mubarak and his "supporters".

So what is the U.S. position? That Mubarak step down now as the demonstrators want? If so Obama refuses to say so in so many words. It is for the "orderly transition" Mubarak wants with elections in November? What does "now" mean for Obama? No one seems to know and Obama isnt saying.

Obama had every opportunity when the revolt first began to call for Mubarak to step aside and to try and use whatever leverage or influence the U.S. had to see that it happened. Instead the result was a mish mash of a response, saying one thing one day and alienating the demonstrators and saying the opposite the next, this time alienating Mubarak.

In Egypt, the violence is getting worse by the hour.  The cliche ridden statements coming from the White House today "condemning" the violence are almost satirical. And Robert Gibbs in today's press briefing said that "no one a few days ago could have forseen the violence that is taking place now". Really? No one? It was not even considered a possibility?

UPDATE: President Obama made a new statement on Egypt, today February 4. In it he said that there must be an "orderly transition that must lead to free and fair elections" ( didnt Mubarak say that 5 days ago?) that the transition must be "meaningful" ( but  again, since he didnt say what "meaningful" means, it's meaningless) and that" the future of Egypt must be decided by the Egyptian people". Oh.
Posted by Marc Rubin at 9:45 AM

Email ThisBlogThis!Share to TwitterShare to FacebookShare to Pinterest
Labels: Egypt: Why Obama should just shut up

For God's sake. He couldn't even decide which dog to buy those kids. How can we expect him to decide how to handle this delicate situation when he is incapable of making any decision? And his greatest strong point is stating the obvious and talking out of both sides of his mouth and making his audience believe anything. He is a fool. And we are screwed.

These have been my thoughts exacty all week, listening to this story unfold.
The ever changing position of Obama follows the same pattern the then senator Obama displayed by his consistently voting present during his very abbreviated first term.
And platitudes seem to be the only thing this guy has the ability to dish out.
Look who he called to his office for a consult, McCain!
And don't forget how Bill Clinton came to his aid and even did the press conference for him- although I can't remember now which mess that was that Clinton helped.

One more point, Marc- I do think the leadership of the U.S. needs to make a clear comment on this crisis. And this is not limited to Egypt, this has great impact on the U.S., as well as Israel.
Leaders are supposed to do just that, lead. Not always easy or fun and always bound to piss off someone.
Obama has shown not only his weakness and inexperience but his immaturity in trying to be "popular" and not upsetting anyone.
He is a joke of a leader, an embarrassment to us all.
And for goodness sake, for the first time in years, Chris Matthews has sounded reasonable!

Too bad we don't have the guts to organize to ease Obama out, like the Egyptians do. There seem to be plenty of people over at HuffPo, for example, who repeatedly claim, "he's doing the best he can". Maybe American's are critical-thinking impaired, and Obama reflects us.

I am a *big* supporter of Obama on making reforms to shape this country up and pull it out of the financial mess we find ourselves in. However, I am not a supporter of his stupid statements about what Egypt should do. He is losing credibility. He needs to focus on our own issues. He is grandstanding. It almost seems like he wants a distraction away from the hard work of passing bills in D.C. Maybe he will get a talk show next. Back to work Barak!