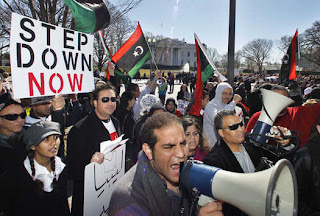 Is Obama taking my advice and getting it wrong?

A few weeks ago at the height of the Egyptian protests I wrote a piece here titled "Egypt: Why Obama should just shut up".

The piece highlighted all of Obama's statements during the Egyptian protests, their essential emptiness and the constant vacillation, one minute siding with the protestor's demands, the next minute supporting the idea of Mubarak staying in power till elections in September. He didn't seem to know where he stood and I commented that it was his chronic lack of principle and conviction on just about everything that left him in a lurch as to what to do.

He received a lot of criticism and accusations that he would be remembered for being on the wrong side of history for not staunchly supporting the protestors and a swift transition from Mubarak to a new government from the very beginning, a position he tried to claim he held privately all along in a leak to friendly reporters at the New York Times.

But during the Egyptian uprising absent a clear position, I suggested he was doing more harm than good with his vague and vacillating statements and it would be better if he just said nothing.

With the uprisings in Libya which have turned bloody, and more demonstrations in Iran, in contrast to
Egypt when he was making statements on a regular basis, Obama has been strangely silent on Libya and the unrest in Iran.

No speeches, no appearances at a podium, no grand pretentious "we have borne witness to history", statements, no nothing even though history is also being made in Libya.  So far there has just been a statement from Hillary Clinton that violence against the Libyan people is "completely unacceptable", whatever that means, since "unacceptable" usually means the party doing the unaccepting is going to act and actually do something as a result of it being unacceptable.

Either way Obama acted like Gaddifi ordering the military to open fire on protesting Libyans wasnt historical enough or worthy of a statement of principle which once again reaffirms the idea that Obama doesnt have any. ( see the note below for the White House excuse for why Obama didnt make a statement -- an excuse which once again, has backfired).

Perhaps Obama feels chastised by what happened in Egypt where no matter what he said he ended up on the wrong end. Even his calculated leak to the NY Times after Mubarak stepped down blew up in his face since he let it be known he was "furious" about statements from the State Department and VP Biden that the transition in Egypt should be gradual when he himself supposedly supported a swift transition,  only to learn the following day that the Egyptian military rejected a swift transition and that it would be the gradual transition Clinton and others in the State Department publicly supported until there are elections in September.

So Obama may have been licking his wounds over Egypt and keeping quiet while the events in Libya have been dramatic.

To date two members of the Libyan air force defected to Malta rather than follow orders to fire on protesting Libyans and two members of Gaddiffi's government including the Libyan ambassador to the UN has either resigned or come out against him.  It was also learned that two air force pilots bailed out and let their bomber crash rather than follow Gaddiffi's orders to bomb the Libyan oil fields. Obama had nothing to say about any of it.

Again he gives the appearance of someone just not knowing what to do. And after being personally criticized no matter which side he took during the Egyptian revolution, he now seems afraid to come out and make any statements at all in the wake of the history making events in Libya, regardless of the now absurd looking excuses the White House gave for his silence.  More like has been the fear of  again looking like someone with no real clarity or conviction.  But his silence has damaged American foreign policy and it's standing in the world.

Adding to the strange silence is that Obama has been upstaged by the President of Peru, Alan Garcia who announced that Peru was severing diplomatic ties with Libya over the use of force against the demonstrators. The same was announced by the government of Botswanna and French president Sarkozy is proposing harsh sanctions by the EU against Libya. All while Obama continues to play "Where's Waldo"  with his policies dealing with the events in Libya.

Late Wednesday president Obama finally made a statement on Libya that news organizations were characterizing as "Obama breaks silence on Libya". The end of Obama's Garbo act produced the kind of statement that shows  that maybe he didnt learn anything from Egypt after all. He said nothing that needed saying or that anyone not in a coma didnt already know. He called Libyan police firing on demonstrators and killing hundreds, "outrageous and unacceptable" ( is this guy the conscience of the country or what?). He said that the United States is " doing all we can". (He said the same thing 2 days after the Gulf oil spill). And he said, "the whole world is watching". But he didnt say on which channel. We were also told the reason for why he didnt say anything sooner -- he didnt want to endanger US citizens in Libya. As if Gaddiffy at this point would take Americans hostage or worse.

Underscoring the absurdity of the White House claim that Obama waited to make his statement  until Americans were able to leave Libya so as not to put American lives in Libya at risk is the fact that these Americans still haven't left. Bad weather has been blamed for preventing the ferry carrying those Americans from leaving Libya, so a day after Obama's remarks they are still there.Maybe Obama needs to hire a meterologist as one of his foreign policy advisors.
Posted by Marc Rubin at 9:15 AM

Well, Captain Obvious is at it again.
Although, I must admit I am not overly pleased w/ our SOS's response either.
And quite frankly, I am having a little trouble believing this is all home grown, someone is behind and funding these demonstrators-
JMHO

Is it just me, or is OBAMA becoming completely irrelevant, domestically and internationally? Whether it's his ridiculous state of the union address or speaking about issues around the world, one wonders who this guy is who suddenly shows up unannounced and tries to offer a word or two which no one listens to, makes no sense, and what he does say is so out of touch with what is happening that you just want him out of the way. In any case, Obama has definitely lost whatever bloom may have been on the rose (for some people)and he has been totally marginalized by the onslaught of those who would take charge, like Gov. Walker and others who are not afraid to present a point of view and act on it.

"...he has been totally marginalized by the onslaught of those who would take charge, like Gov. Walker and others who are not afraid to present a point of view and act on it."

While I disagree with the position Walker has taken I totally agree that the Democrats have a lot to learn from Republicans when it comes to standing up, fighting for and not compromising on their positions. This is something Obama will never learn because he has gotten where he is not standing for anything.

I hope Gov. Walker is NO one's hero here. He is part of the war against American workers, union and non-union alike.

If you're not a billionaire, he is NOT on your side,