Obama plays domestic politics with Egypt and it backfires. 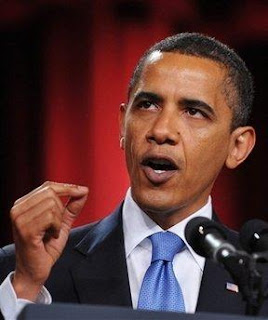 An article in Sunday's New York Times is recounting how Obama was "furious" about mixed messages  coming out of the State Department over the revolution in Egypt as it occurred. This "leak" to the media trying to paint Obama as something that he isn't and wasn't, which is a decisive leader who wanted the administration message to be firmly on the side of the protestors but was undermined by his own State Department is Obama, not at his worst since he has been far more duplicitous, dishonest and deceitful about more important issues like healthcare, but perhaps at his most petty.


Leaks like this do not happen by accident. Obama wanted the story to get out now that any seeming support of Mubarak during the revolt leading up to his resignation was not his idea and that he was always firmly on the side of the protestors demands that Mubarak leave.

The outright lie of that position could be read right here, when, in an article called " Egypt: Why Obama Should Just Shut Up", at the height of the revolt, I commented how Obama's statements were not only contradictory but virtually empty, one minute seeming to side with the demonstrators, the next with Mubarak and not having any clear idea which way to go. I commented at the time that this was the result of who Obama is -- someone with no convictions and no principles, something he has demonstrated his entire political life on almost every issue in which he played a part.

Ostensibly no one was twisting his arm or putting words in his mouth when he made such empty, vague and/or contradictory statements. His statement about how "transition" must happen "now" said nothing about what that transition was to be. Presumably if he meant it he had the capacity to say that Mubarak should step down. But he never did. Now according to the information "leaked" to the New York Times by nameless Obama sycophants in the White House to their sycophantic partners at the Times, we are supposed to believe that Obama supported the protestors all along and that he was "furious" and "unhappy" with statements from Biden, and especially Frank Wisner, his envoy to Cairo who made statements to the effect that Mubarak was "indispensable to any transition" and was echoed by Hillary Clinton who stated that transition would take time, while Obama was saying things should happen "now".

Except Obama never said in any statement what form the transition should take "now", and it seemed at the time that when Obama made his statement, which came after a degree of power was given to Egypt's vice president and parliament had been disbanded that some kind of a transition had taken place. The problem was that wasn't good enough for the demonstrators who demanded Mubarak resign and never once did Obama publicly take that position. Now we are supposed to believe that he took that position privately all along.

This is Obama simply trying to save face, trying to claim this is what he meant and wanted all along even though his public statements were to the contrary. He is trying to save face because during the height of the revolt when he was clearly trying to play both ends against the middle, unsure of the outcome and wanting to be sure he was on the winning side, his responses were tepid, lukewarm or empty and contradictory, the product of a president with no real convictions or principles to guide him, and many people were saying that when all was said and done and Mubarak was replaced Obama would be regarded as having been on the wrong side of history especially by the Egyptians themselves who finally forced Mubarak out.

Now Obama is trying to rewrite history by having it "leaked" that somehow the mixed messages coming out the White House were not his fault and not his doing, that they were the result of the Vice President, Special envoy to Cairo, the Secretary of State and others in the State Department just wandering off on their own making uncoordinated statements regarding policy in the midst of the biggest revolution ever seen in the middle east.

If you believe that, you must have supported Obama for the Democratic nomination while buying pieces of the Brooklyn Bridge Obama sold you ( as for the general election no Republican was going to get elected after 8 years of Bush).

Obama was on the wrong side of history in not supporting the demonstrators unequivocally and trying to figure out a way to persuade Mubarak to leave ( like offering him any number of face saving alternatives). In the end Mubarak cut off communication with Obama who he clearly found useless, and the demonstrators, who found Obama equally useless, finally accomplished their goal.

The New York Times reporters, perhaps channeling Judith Miller, were showing their bias and unreliability by claiming that "Obama was caught between his idealism and pragmatism": And what idealism was that?  His idealism that caused him to sell out the public option to healthcare lobbyists in a backroom deal? His idealism that made speeches about how "every voice must be heard" while doing everything he could during the Democratic primary to silence the voices of almost 2 million voters in Florida and Michigan because they voted against him? The idealism that, while Iranian demonstrators were being shot in the street by Ahamdinejad he took the position that he " didn't want to meddle"?

What has become ironic as well as amusing is that Obama's attempt to rewrite history has backfired. His "leak" that he supported the demonstrators demands all along that the transition be swift has put him in a very awkward position. Because the Egyptian military has just announced that it is rejecting the demands of protestors for a swift transfer of power and immediate elections and will rule by decree and martial law until elections are held in September when power will be transferred to a civilian authority. In other words they have decided on a gradual transition not a swift one. The gradual one advocated by Biden, Frank Wisner and Hillary Clinton.

Just dont hold your breath waiting. Obama is probably now in his chair in the Oval Office, contemplating the decision by the military after his "leak" ran on the front page of Sunday's New York Times, and he is muttering,"shit".

Obama is now caught in a web of his own deceit because of his efforts to try and make himself look good, trying to shift the blame from himself and his own lack of principles and leadership to others and trying  to pretend a "swift transition" was what he was pushing for all along. But now ironically, it is the judgement of others that Obama was trashing to the New York Times just two days ago,  that has become and will be the reality in Egypt not the "swift transition" Obama was trying to claim was his desire all along. And along with it, we also see how the New York Times,still acting as Obama sycophants,has been  transformed from the "paper of record" to a broken record.
Posted by Marc Rubin at 7:19 AM

Email ThisBlogThis!Share to TwitterShare to FacebookShare to Pinterest
Labels: Obama plays poltics with Egypt and it backfires

Obama is swiftly winning the contest for the Most Dishonest president America has ever had.

I would add that -- unless someone can prove differently to me -- Obama is the wussiest president we have ever had.

He is a sniveling coward who has no convictions that anyone could find with a torch and a magnifying glass.

Whoosh! The truth is savage and yes POTUS is pushing to be the most duplicitous pol [I refuse to use the word leader] evah!

And then, the likes of Chris Matthews muses whether the Egyptian uprising could have happened without Barack Obama's input. No, in happened in spite of him. My real fear is the man has no plan, no idea what to do now other than to flood the airways with more platitudes and double-speak. And where, oh where is the great communicator on the subject of Iran? Hillary Clinton has made a statement. From the President? Crickets. Guess he's waiting to see what way the wind blows. His talent? Voting present while the world burns down.

We are in deep, deep trouble.

These authors have internet sites.

The first book gives lot of information about Frank Wisner Sr and the OPC. The following letter is very interesting :

The second book mentions Frank Wisner Sr and is mostly about the introduction of Islamism in the Occident.

Obama's indifference was always on display when his voting record in the IL legislature was made public. When a vote called for showing some political guts, he was often found in the men's room unavailable for comment.

The American public bought this image of a decisive leader who would turn the world into one big "Kumbaya moment" but got President Hapless instead.

The worst legacy of his presidency will be the hateful resurgence of the Right Wing which needn't have happened but for a gutless wonder occupying the WH who allowed the Dem Party and its principles to be trashed in the effort.

It is beginning to look more doubtful that we could have done worse in choosing him.

"Ineptness" thy name is Obama.

This situation isn't any diffetent than countless othets, where Obama roefused to take a stand:
FISA
campaign finance
heath care, public option
Korea
Iran
I know the list is longer,
What I cannot figure out is how Americans continue to look the other way on his blatant failures.

and yet it's time to crank up the re-election juggernaut again. Hard to figure out what the point of it all is and why he claims to want the job when he doesn't appear to want to do the job. He could not be more disengaged but we're supposed to relect him because why?