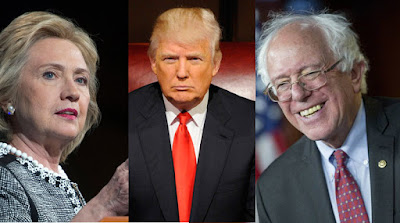 Trump, an experienced promoter, who has a lot more in common with PT Barnum than George Washington and more in common with Don King than Martin Luther King,  seems to be doing what he can to promote the idea that the election will be between him and Hillary Clinton, possibly trying to instill that match up into the minds of Democratic voters and influence them.

And for good reason. Recent polls shows that in a head to head match up , Clinton beats Trump by 1 point, easily within the margin of error which means Trump could also be ahead.
But the same poll shows Sanders beating Trump by 13. No margin of error for Trump.  In other head to head match ups against other candidates,  Sanders outperforms Clinton by a wide margin. Clinton actually loses to Rubio and Cruz. Sanders beats them both handily.

In another analysis of a national poll by Glenn Greenwald's The Intercept, looking at the national poll of Clinton vs Trump and Sanders vs Trump, Sanders beats Trump by a much wider margin than Clinton.  But when eliminating voters who identify as either Democrat or Republican,  looking only at independent voters in the same polls, Sanders beats Trump among independent or non-affiliated voters  16-11. Clinton is in a statistical tie. The head to head match ups of Sanders versus Trump and Clinton versus Trump or match ups against any other GOP candidates has Sanders  doing substantially better than Clinton with both Democratic and independent voters.

This reflects the results of Democratic straw polls in October and November reported here but ignored by the mainstream media . These polls while unscientific, were conducted by Democrats.com,  and had a substantial number of voters -- almost 400,000 that showed Sanders landsliding Clinton among Democrats. The mainstream media also ignored a recent Democracy For America vote , the Democratic group founded by Howard Dean,  inwhich  members were asked to vote via email to select who they wanted DFA to endorse for the Democratic nomination, Clinton, Sanders or O'Malley. Sanders won with a staggering 88% of the vote, beating Clinton 88-9.

There are a lot of good reasons why. Not the least of which has been Clinton's embrace of Obama policies and Sanders suggesting polices that refute them and are much more appealing. And clearly more effective.

The problem for Clinton is that no one, not even Democrats want a third Obama term. And with Clinton not just supporting those policies but in some cases promising to continue them,  which seems to clearly be a trade off between Clinton and Obama and the Obama run DNC where in return for Clinton's fealty and public support of Obama policies ("president Obama doesn't get enough credit"  said Clinton) the DNC is doing what many including the esteemed David Gergen has already pointed out  -- that the DNC is in the tank for Hillary Clinton and will do everything it can to tilt the playing field in her direction.

So will Donald Trump.
Posted by Marc Rubin at 8:32 AM