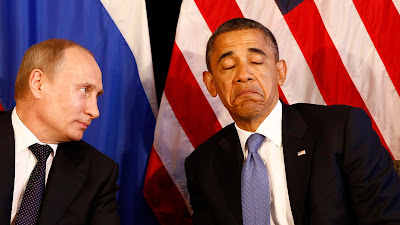 Yesterday  Vladmir Putin sent a message to Obama and the U.S. blind siding Obama by giving only one hour's notice that Russia was going to begin air strikes in Syria and that the U.S. needed to get out of Syrian air space now to avoid any risk of confrontation. Obama said okay.

The Russian cover story is that they are going to fight terrorists on behalf of Assad.  And John Kerry, living in his unicorn fantasy world said, "We welcome all genuine efforts to fight Isis but we must not and will not be confused between the fight against Isis and supporting Assad".
That was John Kerry not General Buck Turdgison in Dr. Strangelove  who said it as Russian air strikes were targeting Syrian rebels in the city of Homs where there are no Isis fighters but is an anti-Assad rebel stronghold.
Kerry said that if Putin bombs targets unrelated to Isis he and Obama would be "gravely concerned". That is Obama's idea of laying down the law. You can almost hear Putin laughing and saying , okay we'll drop bombs and you be concerned.
Russia is in fact bombing targets unrelated to Isis and if Obama and Kerry have concerns that are grave that is nothing compared to the civilians in Homs who are now digging theirs.
Its clear to everyone but Kerry and Obama that Putin is doing for Assad what Obama wouldn't do for the Syrian rebels  when he ignored  the recommendations three years ago  of 3 Secretaries of Defense, one Secretary of State and one Director of the CIA to arm the moderate Syrian rebels against both Isis and Assad and now it's Putin taking control of the situation, coming to the aid of Assad who Obama has said repeatedly said must go. Which as everyone knows by now carries the weight and moral force of a Telebrands commercial.
Even on the usual pandering CNN, anchors were asking correspondents, " did Obama get played by Putin"?  It wasn't all that long ago that CNN did a segment on Ukraine that asked " did Obama get bullied by Putin"? It's gotten embarrassing.
And Putin knows there will be no real consequences. Obama's  warning to Assad that if he used chemical weapons he would launch a missile strike against Assad's military was a toothless tiger.  As an aside,  this threat of a U.S. missile strike against Assad on behalf of Syrian civilians who were killed in a chemical weapons strike so horrified the people at MoveOn, ThinkProgress  and DFA who called a single retaliatory missile strike " war" , (just like it was "war" if the congress didn't go along with Obama's capitulation on the Uran nuclear deal)  that they circulated a petition begging Obama not to live up to his word and back down on the missile strike.  Which was a big waste of time because, to paraphrase a Geico commercial, Obama  not living up to his word is what he does.
Adding to the farce is the $500,000,000 the Obama administration finally decided to spend to train Syrian rebels.It belongs in the Guiness Book of World Records winning the Too Little Too Late award.  It has resulted in a grand total of five (5) , yes, 5 Syrian fighters now in the field. Five. That's $100,000,000 per fighter. A B1 bomber doesn't cost that much.
One reason the number of fighters is so small is because the Obama administration making, incredulously, another farcical decision,  refused to train or arm any Syrian fighter who wanted to fight against Assad as well as Isis,and would  only train those only willing to fight Isis. Which effectively drove away 99% of Syrian fighters who wanted to fight both. So while Putin bombs rebels on behalf of Assad, Obama refused to arm rebels fighting against Assad. Though he did say Assad had to go.
Putin has  made clear his intentions. Its just taking Obama and Kerry a bit longer to come out of their unicorn fantasy world and figure it out when Kerry said, "we will not be confused". Sounds like they are confused.
Putin said, "Russia will conduct air strikes on behalf of the Assad regime only in it's lawful fight against terrorist groups".  Obviously Obama and Kerry haven't figured out yet that to Assad the terrorist groups are the rebels.
Kerry said "we will not be confused between the fight against Isis and supporting Assad". It sounds like they still are.
The final bit of farce came from Josh Ernst, Obama's press secretary when the reality of Russia conducting air strikes against the rebels not Isis was clear. Ernst tried to spin it by saying Russian air strikes on behalf of Assad was a sign of Assad's weakness. No it wasn't. It was a sign of Obama's.
Posted by Marc Rubin at 10:51 AM