Frederic Hof was a State Department advisor to Hillary Clinton on political affairs in Syria and was Deputy Special Envoy to George Mitchell for Middle East affairs.  In a long overdue stinging rebuke of Obama and his policies in Syria,  and from someone within the Obama administration, Hof  pulls no punches about Obama's personal failures  in Syria and not just of policy but character.

In an article on Politico.com Hof gives a long overdue and honest assault on Obama and his Syrian policy,  this from someone part of a Democratic administration not Republicans, who saw everything he tried to work for in Syria unravel between Isis, the group Obama ignored as " the junior varsity",  the resulting  refugee crisis and Putin doing for his interests what Obama wouldn't do for U.S. interests.
In a harsh but accurate indictment of Obama, Hof states that back in 2012 when the dimensions of the catastrophe in Syria were becoming clear, Obama  had "little appetite for protecting civilians".  This almost dissassociative response from Obama, some might even call it callous but certainly indifferent, might explain Obama's easy reneging on his pledge and threat to punish Assad with a missile strike if he used chemical weapons.
After Assad essentially put his thumb in Obama's eye and went ahead and used chemical weapons anyway killing 300 children and almost 1000 adult civilians with sarin gas, Obama, intead of delivering on the promised strike, backed down as soon as there seemed to be some opposition to his missile strike from some in congress , the Tea Party Left like MoveOn (who called it "war")   and pressure from Putin. Instead Obama opted to put his integrity to a vote. His integrity lost. Again.
Hof also states that the Obama administration was actually "shocked" by Russian intervention in Syria, taken completely by surprise which Hof says should have been no surprise and that Obama had been essentially bamboozled by Putin  (the same complaint made about his capitulating and now fast unraveling nuclear deal with Iran) and that Obama didn't see what many did -- that Putin was intent on keeping Assad in power.
Remember it was Putin of all people who pressured Obama not to go ahead with the missile strike against Assad which led to Obama publicly deciding to put the missile strike to a vote in congress  to save face  -- a vote he knew he'd lose but would give him the cover he needed to back down.
True to Obama's history of being only talk Hof as an insider revealed that the main concern at the White House as Syria began to descend into hell was, as  Hof  defines it, "a communications problem" for the White House. Their main concern wasn't what was happening in Syria or to the 200,000 who were dying, it was getting Obama "on the right side of history in terms of his public pronouncements".
Which explains why for 3 years all Obama would do is say "Assad must go" while at the  same time doing absolutely nothing to help bring that about.
In Hof's words, " What the United States would do never enjoyed the same policy priority as to what the United States would say".  Which has always been the case with Obama on any issue.
What makes it even worse for Obama in light of the weak nuclear deal with Iran is that, as  Hof points out, Iran is "fully complicit in Assad's war crimes and crimes against humanity", along with  partnering with Putin who is propping  up Assad with air strikes. This is the Iran who Tea Party Left groups like MoveOn, Democracy For America and ThinkProgress  said would soften its stance  as a result of the nuclear deal and who at the time accused those who wanted a tougher nuclear  deal with Iran as being war mongers.
Hof says that Iran and Russia could stop what he called  "the gratuitous mass murder" of 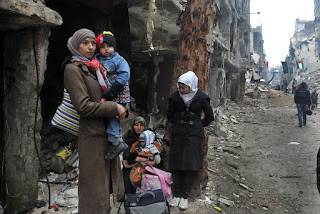 civilians but opt not to do so.
Hof also says that the United States could stop it without invading, without occupying and without ground forces in Syria and " without stretching the parameters of military science". But  according to Hof who is in a position to know, Obama "has adamantly refused to do so". Making him complicit in the mass civilian casualties in Syria and the refugee crisis it created. Also complicit are Tea Party Left groups like MoveOn who are now wringing their hands over the Syrian refugee crisis but who vocally opposed Obama making good on his threat of a missile strike against Assad which would have substantially degraded Assad's air power and ability to drop barrel bombs on civilian populations, hospitals and schools.
Hof  believes that " the United States should neither seek nor shy away from a military confrontation with Russia in Syria." He correctly point out that if the United States -- i.e. Obama stood up to Putin and refused to allow Russian jets to have their way, Putin would be reluctant to allow Russian fighter jets to escort Assad's fighters on their missions of mass death. Instead Putin told Obama to get out of the way, to get U.S. aircraft out of Syrian skies and Obama did what he was told while muttering things like being "deeply concerned".
Hof says that if Putin seeks a military confrontation with the United States in Syria betting that Obama would back down, the U.S. needs to stand up to Putin otherwise Putin will not stop in Syria but keep going until " he hits steel".
Hof concludes by saying that in August of 2011, falsely believing Obama was more than just words, he testified before a congressional committee that the Assad regime was " a dead man walking" . He believed that when Obama delivered his ultimatum to Assad about being punished with a  missile strike if he used chemical weapons ,that if Assad did cross Obama's "red line"  he would be dealt " a debilitating body blow" which would have crippled Assad's ability to drop barrel bombs on civilians and use air power to cause mass casualties.
On  Obama backing down on the missile strike Hof writes " I still do not understand how such a gap between (Obama's) word and deed could have been permitted. It is an error that transcends Syria".
It is an error that is who Obama is, and always has been.
Hof writes that if Obama actually did something now to stop the slaughter in Syria including standing up to Putin, it would be a "reclamation of American honor".  But based on Obama's 17 year history in elected office,his past judgements, character and decision making, or lack of, that is not likely to happen. If it were, Obama would have backed up his words with deeds a long time ago.  He never has. He never will. So it will be left to Hillary Clinton on the campaign trail to either defend or repudiate the words of her own Special Envoy to Syria and the disaster of the Obama policy he has so harshly exposed. And what she would do  differently. If anything.
Posted by Marc Rubin at 7:49 AM

I completely agree that Obama was wrong-and Hillary correct-in his failure to take real action in Syria back then. And that that failure was in character. But the situation has changed and some doors that are closed can't be reopened; at this point an Assad/Putin victory in Syria (essentially a return to the status quo ante before the Syrian civil war) is probably the best case scenario.

As for meeting Putin with "steel," Syria is not the place to do it, as he can respond by vastly ramping up the violence in Ukraine. If we are going to threaten a direct confrontation with Russia (which still has nukes btw) then Ukraine, not Syria, is the place to do it. (Not to restore Crimea or Eastern Ukraine-again, doors already closed-but to protect the rest of that country.)

As for Iran, whether the nuclear deal will hold or not remains to be seen, but the claim we could have got a better deal remains quite unconvincing. The real question is/was whether we would be better off with this deal or no deal. I don't actually know the answer to that at this point, but neither does anyone else.

Sy Hersh was right about the sarin, it was the jihadis and not Assad.
http://www.todayszaman.com/national_chp-deputies-govt-rejects-probe-into-turkeys-role-in-syrian-chemical-attack_402180.html