CNN Strikes Out With Democratic Debate Up Against Mets-Dodgers. 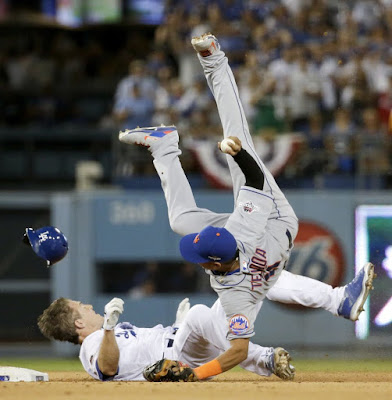 What does CNN and the '62 Mets have in common? The '62 Mets were the worst team in the history of baseball leading Casey Stengel their manager to say, "can't anyone here play this game"?

The same could be said about CNN and their often shoddy and dishonest journalism but the powers that be at CNN hit new levels of stupidity by assuring a smaller than expected audience by deciding not to change the date of the first Democratic presidential debate which is going to air opposite a crucial game 4 playoff game between the Mets and the Dodgers.

CNN knew two weeks ago when Major League Baseball released the television schedule for the playoffs that a game 4 between the Mets and Dodgers would be played in New York in prime time on October 13 (game time 8:07).

The fan base for the Mets and Dodgers in New York and California combined probably exceeds 20 million to be conservative given that the populations of the two states combined is about 50 million, and one can be sure that none of those 20 million will be watching the debate over the Mets-Dodgers playoff game. And that doesn't include the interest the game has for the rest of the country or casual viewers whose interest might be limited to the playoffs.

Knowing two weeks ago this was going to be the case it remains for CNN and the Democratic party, to explain why they didnt move the date so as not to conflict with the playoff game. Yes people can DVR it if they choose and maybe some will but it still doesnt explain the idiocy of not changing the date when the two most populous Democratic states in the country will be watching the Mets -Dodgers and not the Democratic presidential debate. It's also incomprehensible as to why Debbie Wasserman-Schultz, the Chair of the DNC didnt ask CNN to change the date by a day. Which reenforces Casey's line, "can't anyone here play this game"?

CNN did something similar in 2012 when it scheduled the first Republican presidential debate against a long awaited NFL game on a Thursday night, a game that ended up as the highest rated  Thursday night game of the year.

At the time, Wolf Blitzer, ignoring facts as he usually does to shill for the network introduced the debates by saying " the whole world is watching".They werent. And he knew it. Most were watching the football game. And the same will be true tonight in the two biggest Democratic states with the most Democratic voters most of whom will be watching the only debate tonight that will matter to at least 20 million of them, the one between Kershaw,Matz, the Mets and the Dodgers.

NOTE: The day after the debate every news organization in the country was featuring the story that the Democratic debate set records for viewership according to Nielsen ratings, bringing in 15 million viewers. But that story which was published by every news organization in the country from the New York Times, USA Today, Hollywood Reporter, Huffington Post to Variety and everyone in between were only republishing the story put out not by Neilsen but by CNN.  Not one of these organizations actually did their own reporting because as the Neilsen client, only CNN  received the actual data. So all the numbers trace back to what CNN reported. And with CNN having the reputation as being the Most Rusted Name in News, from dishonest polling numbers to biased incompetent reporting they ought not be taken at face value since they did not release the raw data from Neilsen which should come today.

The number of viewers claimed by CNN which weren't actual viewers but guesses, werent ratings at all. Neilsen puts out what are called "overnights" the day after.  Those are overnight ratings based on three cities: New York, Chicago and L.A. which are considered preliminary indications. The "Nationals" which are the actual ratings come out the following day.

CNN extrapolated the overnights to a national audience without having the real figures. Further, the number of "viewers" is always a guess. A single ratings point equals 900,000 homes. A rating of 8 means approximately 7.2 million homes with television sets were tuned into the debate. How many viewers is a guess . The 15 million number comes by  averaging 2 viewers per set but it is still a guess.

The real numbers should be out sometime today.

ADDENDUM: For the record CNN never released the final numbers for the debate making their initial claims suspect. As usual.