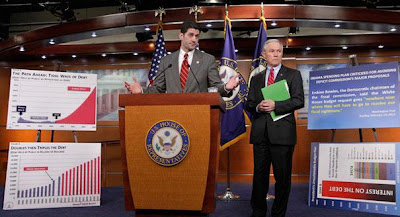 The hypocrisy of Republicans and tea party conservatives and their representatives in Congress when it comes to deficit reduction has now hit new lows especially with Paul Ryan's absurd budget which is based on the repeal of Obamacare, something worth doing but only if it's replaced with a public option and nothing that will happen with the present make up of congress.


This exercise in futility is brought to you by the same representatives in Congress who in the name of fiscal conservatism and deficit reduction were prepared to allow the United States to default on its debt for the first time in its history, an unconstitutional act that could have been labeled treason had Obama or the Democrats had the backbone or political savvy to do so. Had they called their bluff there wouldn't even be a sequester now.


Republicans and Tea Party conservatives have embraced the sequester which as everyone knows by now was a foolish compromise by Obama who didn't know how to stand up to Republicans on the debt ceiling and so made an offer he expected the Republicans to refuse . They didn't.


Knowing he has outgamed Obama which Republicans always seem to do, John Boehner has said he will entertain no other solutions to reducing the deficit that includes more revenue, even if increasing revenue doesn't mean higher tax rates only closing corporate loopholes. The point isn't deficit reduction, it's gamesmanship.


In the end, as the Ryan budget which is predicated on the repeal of Obamacare shows, these are not really fiscal conservatives, but fiscal fakes and have been since the days of the Bush administration when it was solely Republican policies that caused all the problems in the first place. Ryan himself has admitted his budget isn't a serious one that could ever be adopted, but a political statement. Ryan acknowledges his party lost the election but asks, " are we supposed to give up our principles because we lost the election? Are we supposed to stop believing in what we believe in"? The answer is no, youre supposed to acknowledge that the majority of the country rejected your princples and do not believe in what you believe in so stop trying to cram it down everyone's throat.

What Ryan nor anyone else in the Republican party want to acknowledge is that the Republicans inherited a balanced budget and a zero deficit from Bill Clinton in 2001 but it didnt take long for them to destroy it. The first $1 trillion hole Republicans blew in the balanced budget and what originally caused the deficit, was the decison by a Republican dominated goverment that for the first time in American history took the country to war and cut taxes at the same time. Republicans wanted the war but didnt want to have to pay for it. And they didnt. Ideology first because they always want to cut taxes, and fiscal responsiblity last.


What is at issue for Republicans now  is not how to solve a problem, something they have proved incapable of doing, but how to use the sequester to further Republican and conservative ideology, an ideology that has been nothing but a disaster for the United States in every aspect of life since the beginning of the Republic whenever Republicans or conservatives have had the votes to implement their ideology. It has been the defeat of conservatism from the time of the Revolution to the present that has allowed the United States to get where it is. Unfortunately there are few liberals and Democrats who know how to hoist conservatives on their own petard and instead have been relying on conservatives to do or say something stupid which Democrats can then turn into victories.


As for the sequester and so called deficit reduction and cutting spending, the proof of Tea Party and Republican hypocrisy is that the states that  most Tea Party conservatives represent like Idaho, Kansas,  and others receive much more in federal money then they pay out in federal income taxes. Its federal tax money from more prosperous states like New York,Pennsylvania, Massachusetts and California, that for the most part go to finance the federal programs and subsidies in these so called conservative Red states.


Conversely, states like New York, Pennsylvania, Massachusetts, and California, get far less back from the federal government then they pay in federal income taxes.


So here is the solution for the Tea Party Republican conservatives in Congress who want to cut spending without producing additional revenue and who want to claim they are not liars and hypocrites: sign a pledge and sponsor bills that make it federal law that no state can accept one dollar more in federal money that exceeds the amount in federal taxes their states send to the federal government less their share of defense and non- discretionary spending. Not a dime more. For anything.

Then, if these Red states don't like the reduction in services -- money for health, education, infrastructure or law enforcement --  because of the cut in the revenue they receive from the federal government, let them raise taxes in their own states to pay for it. Or do without them.


The money the federal government can save by not giving these conservative states any federal money after taking out their share for national defense and other non-discretionary spending,can go directly to deficit reduction.


Any Republican representative who wont make such a pledge or sponsor or vote for such a bill should be branded a liar and a hypocrite, along with the constituents and members of the Tea Party in the states and districts they represent.


Democrats should try and introduce such a deficit reduction bill, then use it against any Republican who wont support it. That might put an end to the gamesmanship involved in conservative budget policies that are more about "do what we say, not what we do".
Posted by Marc Rubin at 8:43 AM

Study my Letter on Diana@Philosophyinaction.com.
Stop referring to the politicians' Deliberately Increasing their Debts & Deficits as "Controlling" or "Reducing" them!
Crazy, Lying, Stupid, Thieving, Crooked, Con artists are NEITHER "Conservatives", nor
"Fakes".
The so-called "federal government"
is not only Bankrupt, & Head-Over- Heels in Debt, It's Operating Way In The Red, & It Has A Huge, & Increasing, Budget Deficit. There's virtually zero $ for anything whatsoever.
(Instead of searching for Crazy Inbox, try June 5, 2012 p=6498.)