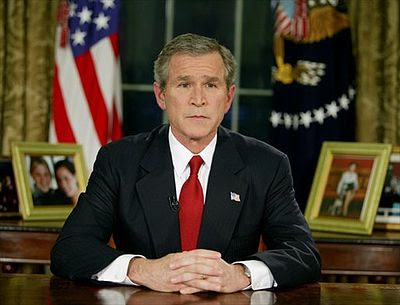 When trying to assemble a collection of the news media's finest moments, other than Edward R. Murrow's standing up to Joe McCarthy, Walter Cronkite's broadcast calling Vietnam a stalemate and a war we couldn't win, and Woodward and Bernstein's historic Watergate reporting, the news media over the last 15 years, especially in times when it's needed most, doesn't have much to be proud of.


Over the last 15 years, beginning with the All Monica All the Time coverage by the cable networks of the Clinton-Lewinsky affair, self-serving news coverage which gave the Republican majority the belief there was hay to be made in impeaching Clinton, there has been a lot for the news media to be ashamed of. And none more devastating then their collective abdication of responsibility, incompetence and spineless, fearful reporting in the promoting and selling of Bush administration lies when it came to the run up to the war in Iraq.


That George W. Bush, Dick Cheney, Condoleeza Rice and others in the Bush administration told outright, bald faced unequivocal lies both to the American public and privately to members of congress to gather support for the war in Iraq is now a part of history and proved beyond a shadow of a doubt. Senator Bill Nelson, a former astronaut revealed two years ago, that in a private meeting with civilian administration defense department officials, he had been told that Saddam Hussein had drones capable of hitting the east coast of the United States with a chemical attack. That was not only an outright lie, but there was in fact an Air Force intelligence assessment of Sadaam's drones and that intelligence report stated they were made of wood, did not have a range of more than 300 miles and had no capacity to launch any kind of missile. We also know Dick Cheney lied to House Majority Leader Dick Armey to get him to change his opposition to the Iraq invasion, telling him Sadaam had developed miniaturization technology that could result in a nuclear suitcase bomb.


That the news media never questioned a word anyone from the Bush administration said, never demanded proof, never even asked for it, never considered there could be two sides, and ignored all the credible evidence that flew in the face of the Bush-Cheney lie machine is also now a part of history. And is why, even today, the worst collection of journalists, especially on cable news, that the country has ever had continues to deserve our contempt.


Leading the charge of journalistic incompetence and malfeasance was the New York Times who were duped by Dick Cheney worse than a first year journalist for a high school newspaper but have nothing but their own low journalistic standards to blame.


As everyone knows by now, Dick Cheney's office, through Scooter Libby, fed the gullible and ambitious Judith Miller, a reporter for the Times, a series of false "facts" that she swallowed like a trained seal, and with the thumbs up from her equally journalistically irresponsible Washington Bureau chief Jill Abramson (who incredibly was promoted and is now the Executive editor of the Times) wrote articles about Sadaam's WMD that were published on the front pages of the NY Times, all of which turned out to be false and published by the Times without a shred of proof.


Cheney and Bush then used the Times front page spoon fed reporting as if it were the product of the Times independent reporting which confirmed their claims and used that to bolster the case for war. Without a word of protest from the Times. This was not only a massive failure on the part of Miller and on the Times editors but journalistic incompetence and malfeasance.


Anyone who has ever seen All the President's Men, knows that at the Washington Post during the Watergate investigation, Ben Bradlee's journalistic standards required that Woodward and Bernstein get corroboration from three independent sources before the Washington Post would publish a Watergate story. The New York Times published front page stories asserting the existence of WMD by Sadaam Hussein, written by Miller, spoon fed to her by Dick Cheney justifying the case for the first preemptive war in American history without trying to get a single independent source to corroborate what Miller was being told.


On the contrary, there were sources who plainly contradicted what Cheney and Bush were pushing, no less a credible source than Hans Blix, the UN weapons inspector who had spent time in Iraq and was absolutely convinced that Sadaam did not have any biological or chemical weapons and no capability at all to make a nuclear weapon.


Republican conservatives at the time mocked Blix, dismissed him, and ridiculed him while the NY Times, and cable news' Wolf Blitzer at CNN and others stood around with their hands in their pockets and behaved like sycophants, afraid, as they always are, to speak out or present contrary information if they think they might pay a price. It was during an interview with Blitzer on CNN that Condoleeza Rice told Blitzer "we can't afford to see the smoking gun turn into a mushroom cloud". Blitzer let the statement stand without even an iota of skepticism or demanding any proof.


Then of course there were the radio stations in Texas and other Red states who, taking a leaf from the Nazi propaganda effort, organized the mass burning of Dixie Chicks CD's because of their public statements against the war, statements which gave massive heartburn to their propaganda swallowing listeners who believed every lie the Bush Adminstration told, including Cheney's lie to a VFW gathering in which he said " there is absolutely no doubt that Sadaam Hussein has weapons of mass destruction". When Cheney made that statement he did not have one single peice of intelligence from any intelligence agency that would have allowed him to make that statement.


Yet even today, MSNBC's Chris Jansing either out of sheer ignorance, dishonesty, or perhaps unable to come to terms with her own complicity in the lies she helped disseminate,  talked about how "faulty intelligence led to the war in Iraq" when today  it is well known that no intelligence ever gave the Bush administration a shred of proof that Sadaam had WMD and in fact even warned the White House about statements it was making because there was no evidence of WMD in Iraq


In a recent interview on MSNBC marking the anniversary of the Iraq invasion, congresswoman and Iraq war vet Tammy Duckworth said that she wished there had been a more reasoned and a more honest discussion about going to war in Iraq before the invasion (hard to do when Red State war mongers who belonged to the coalition of the willing to hold the coats of those who had to fight were burning Dixie Chicks CD's and convulsing like Holy Rollers over going to war). But the primary reason there was not an honest discussion and a reasoned debate over going to war was completely the fault of the news media, those at MSNBC, Fox, CNN, the New York Times and those who followed their leads.


Those media outlets made it impossible to have an honest discussion about going to war, an honest discussion about the "evidence" and more to the point, the lack of it. They dutifully kept their mouths shut except to cheerlead for the war, followed the Bush administration lead and refused to question or raise a doubt while the Republican and conservative cheerleaders for the war were branding anyone who opposed the war or even questioned it as "unpatriotic".


And those who quivered the most, who were most afraid of that label and who buckled under were the news media, people Wolf Blitzer at CNN who got real tough with Anthony Weiner over a photo of him in his underwear but was an administration puppy dog when it came to the lead up to the war in Iraq. Management at MSNBC, wasn't much better, and then there was of course, Judith Miller and the New York Times.


Maybe the worst of it is, after all the lies they reported as facts have now been proved to be just that,  and is a matter of history,  and how mainstream journalism was complicit in shaping dishonest policy and dispensing propaganda, when it comes to mainstream journalism and the lack of competence and integrity with which they do their jobs, nothing has changed.