Obama sends Democrats,their principles and sound policy over the cliff. 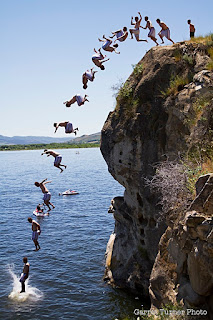 Once again, as he has done his entire political life, Obama ducked, sold out, and what's worse sold out when he didnt have to. Which is usually the case when Obama sells out. That is the upshot of the deal passed to avoid the mandatory tax increases of the so called fiscal cliff.

Most people, relieved there was some kind of deal, do not realize how bad the deal really is and that most of what's bad about it was avoidable and the result of Obama once again caving in for the same reasons he accomplished  nothing in 11 years of public office before running for president - he has no real  principles, no convictions,and  no backbone, not to mention nothing in the way of legislative or negotiating skills. Add to that no vision and that his word, as Republicans know, is etched in Jello-O, and you get the Obama presidency. And what happens when Obama has to make a decision.


Here is what's bad about Obama's sell out. As he did with the public healthcare option before he capitulated and sold that out, Obama said over and over again both while running for re-election and after his election, that he would refuse to accept any deal that didn't raise tax rates on income $250,000 and above. He promised it, he pledged it, he made the case for it, and he had an overwhelming majority of Americans supporting it including business leaders and the wealthy that would be most affected by the increase.


It wasn't a case of class warfare. It was just common sense given the irrationality of the Bush tax cuts in the first place the dire straits the economy is in and the deficit created by Republican economic policy which not only took the zero deficit and balanced budget they inherited in 2000, but,after blowing that, instituted polices that sent the country into the worst economic crisis since the Depression ( Bush and the Republicans became the first government in American history to take the country to war and cut taxes at the same time, thereby creating the deficits and spending $1 trillion on the Iraq war without paying for it).


These are the people and the policies that Obama seems to have a hard time repudiating and standing up against.


Yet, holding all the cards, ( though he either played them badly or not at all), after drawing a line in the sand at $250,000, a level needed to raise the kind of  revenues that would make a real difference in deficit reduction, Obama, inexplicably and without reason or a need, said, okay forget $250,000, how about $450,000? And for what?


The bill the senate passed would have passed had the level been $250,000. There were Republican senators who had already publicly supported the tax increases at that level.


So the senate bill the House eventually passed would have passed with the same votes and the same opposition at $250,000 as it did with $450,000. Except this is the result of Obama's unnecessaryattempts at capitulation:


The tax increase at $250,000 would have raised $1.6 trillion in revenue. That would have gone for significant deficit reduction. Instead, the tax increase at $450,000 will produce only $620 billion in revenue, only 40% of what Obama promised. Since the tax fight is now over, where will the rest of that money come from?  How will it be made up? It has to come from spending cuts. So Obama will now have to agree to an additional $1 trillion in spending cuts just to get to the level of deficit reduction that would have been accomplished had he stuck to the $250,000 figure he pledged.


There was certainly no choice for Democrats, moderates and liberals and sane people but to defeat Romney and the lunatic right in the last election.And the extreme right were not only defeated but repudiated.  But Obama is still Obama. And unless the Democrats in congress take the reins from Obama and set the agenda themselves and force Obama to go along, unless liberal groups like Move On, the PCCC and Democracy for America, groups who in many ways were responsible for getting this completely unqualified and duplicitous candidate nominated in 2008 in the first place, unless they stop sending out whining emails about how Obama is screwing them again and take their case to Democrats in congress and force congressional Democrats to take the reins from Obama, ( a very plausible goal since most of them will run for re-election while Obama won't), make sure they get the message that  the next time they let  Obama go over the cliff he is liable to take a lot of them with him.

Being a relatively old person (60), I'm concerned not only about Obama's failure to keep his promises on the economy but about the long-term effect of the values Obama's "leadership" is instilling. My 20-something kids' friends - 2008 Obamabots - ignore evidence one of then was a National Merit Scholar so it's not lack of ability to think critically.) When faced with info. on the stream of "present"votes in the IL state senate, they just say, "whatever." Deceipt is becoming an accepted value like I've never seen before - Democrats equalling Republicans, beginning with Obama's despicable 2008 primary behavior and the incredibly disgusting DNC Rules and Bylaws Committee meeting. Acceptance of inequity in influence in government is seeping into the 20-30-something generations. I'm afraid for my children. They don't have any comparison to keep them grounded.