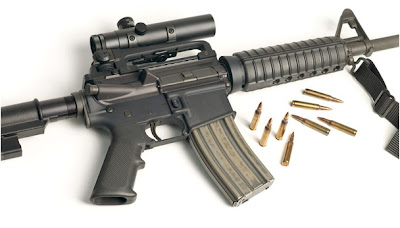 New York State has been the first to act and pass more gun control legislation since the shootings at Newtown.


While there is expanded background checks and other measures, the biggest is the outright ban on assault weapons and high capacity magazines, not just for rifles but handguns and pistols as well.


The outright ban on these weapons means, obviously, they will no longer be sold in New York. But additionally, for those who already own these weapons, the law is now going to require current owners to register the weapons with the state. Since the weapons are now banned, those currently owning them, while not having them confiscated will not be able to sell them privately to anyone in New York. And more extensive background checks including those related to mental health are now going to include private sales.


That this ruling was completely bogus as well as contrary to the amendment's intent, the intent of the Framers who created it, the words of the amendment itself, and 224 years of Supreme Court precedent is evident in the New York State legislature and governor Cuomo essentially ignoring the Roberts court ruling and passing the legislation they wanted.


Though gun laws and restrictions have typically been a local matter for state, city and town governments, the Federal government should immediately act to respect state law and pass legislation that makes it a federal crime to transport an assault weapon over state lines. While other states may act differently than New York and not ban these weapons, it should be incumbent on the federal government to make transporting these weapons over state lines a federal crime with harsh penalities -- 20 years would do nicely. This would insure the integrity of the law of any state that wants to ban these weapons as New York has.


The new law also bans magazine clips of more than 7 rounds, down from 10 rounds and substantially less than the 30 round clips that have done so much damage in mass shootings.


An opponent of the law, Republican Kathleen Marchione, said the law "weakened the second amendment constitutonal freedom of every New Yorker". Unfortunately for her argument, you cant "weaken" a constitutional provision. It is iron clad and if someone wants to challenge these new laws and take them to court as being unconstitutional, including the NRA, they are welcome to try. But it's unlikely anyone will.


The NRA has weighed in and said they are "outraged" by what they call "the draconian laws" just enacted by New York State. Okay, so they are outraged. So what? The question is what are they going to do about it? There was not a word from the NRA about the recent Supreme Court decision and not a word about challenging the new New York laws based on their constitutionality. We'll see if the NRA is more than "outraged".  We'll see if they try and get these laws overturned. If not, they will prove again, emphatically that even the NRA knows better and won't push the idea that the second amendment applies to individuals. As former Chief Justice Warren Burger, a conservative appointed by Richard Nixon said repeatedly, the idea that the second amendment applies to the individual is "the biggest fraud, I repeat the word fraud, ever perpetrated by an interest group (the NRA) on the American people in my lifetime".


Tell that to the families of the victims at Newtown whose loved ones were killed by an assault weapon owned by a law abiding citizen who clearly did not understand how to take care of her gun and to make sure it was not a danger to others and left her weapon accessbile to her son who then took it, went to Sandy Hook Elementary school and used it for mass murder.

Wow, for someone using Thomas Paine's moniker, you have ZERO knowledge about how tyrants operate and and a negative balance when it comes to our Bill of Rights...

According to actual FBI stats, there were 5, that is right, FIVE murders in New York State commited using rifles in 2011.

These 5 rifles include ALL THOSE EVIL ASSAULT RIFLES you pretend to know so much about. For all we know, those 5 murders were committed using bolt action rifles.

So the actual FBI numbers do not back up your claims about those "evil assault rifles." The vast majority of murders committed in NYS and nationwide are done using pistols. In case you have not noticed, to even touch a pistol in NYS, you need a license which will take the average honest citizen about 6 months to get.

But of course, your extremist liberal opinion is presented as facts, because your gutter ideology enables you to become a firearm expert, event though you have never owned a firearm, used a firearm, or even touched a firearm.

They pretend to want a safer New York and how do they achieve this, by banning scary features on guns. Why did Cuomo force this bogus legislation through in the middle of the night. This is not how a Representative government is supposed to work. The people they represent should have a say on laws that are imposed upon them.

"Wow, for someone using Thomas Paine's moniker, you have ZERO knowledge about how tyrants operate"

How do you know? do you work for Tyrant's R Us? What you know about the Bill of Rights and the second amendment is clearly zero. And my guess is you do not even know the definition of a single word in the second amendment. You forgot to read the other quote, the one from Will Rodgers that says, "its not what people know that makes them look like fools, its what they think they know that aint so".

Obviously you know less than I do about what an assault rifle is. And to show your total ignorance, it was the governor and the state legislature that banned them, I didnt get a vote. My point which was obviously too much for you was that it proved that the second amendment had nothing to do with an individual right to own a gun. If it did, that law couldnt have been passed.

"They pretend to want a safer New York and how do they achieve this, by banning scary features on guns."

You need to invest in a calender. The "scary feature" thing was in the ban in 1994.That's history. This bans any ammunition clips over 7 rounds. As I said, anyone who cant hit a target with seven rounds is a loser anyway and shouldnt have a firearm.

Also the legislation was hardly passed in the middle of the night. There was tremendous publicity about it for weeks before the vote because Cuomo had to get the Republican majority in the assembly to pass it and the Republican speaker signed on to it and it was passed handily, then went to the Democratically controlled senate and passed there.