How many NRA executives does it take to screw in a light bulb? 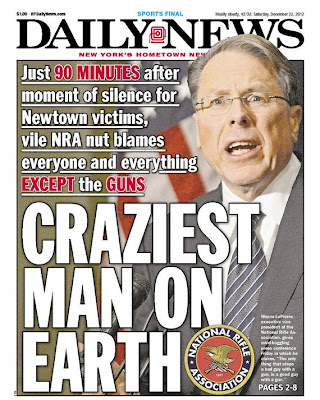 Wayne LaPierre, when he gave the official NRA response to the Newtown murders said, " I call on congress today to act immediately to appropriate whatever is necessary to put armed police officers in every single school in this nation and do it now".


That was the sound of La Pierre standing on a chair holding a light bulb while five NRA executives rotated the chair.


There have been many reactions and responses to the Newtown shootings in the last month and one of the unintended results is that it has turned the NRA into a joke, a laughable organization run by right wing clowns and lunatics who seem to want to take any idiotic action possible just to avoid being  inconvenienced by more controls or laws or bans on certain kinds of weapons that would make the citizenry safer.


The NRA has a membership of a little over 4 million. How many of them support LaPierre and the NRA leadership and how many are embarrassed by him there is no way to really know. But his "idea" of congress appropriating money to put armed police officers in every school in the country shows how low, dishonest and nonsensical he and the NRA leadership are. And when you have the conservative, Republican leaning New York Daily News calling you crazy and calling the NRA vile, you know that except for the most spineless members of congress that allow themselves to be intimidated, you've lost the argument , you've lost  all credibility and you've lost the war.


First,even if congress wanted to pass a law requiring armed police in all schools in the country, it would be unconstitutional (given what former Chief Justice of the Supreme Court Warren Burger called the NRA's "fraud" over the second amendment, recommending something unconstitutional isn't a surprise) since the federal government has nothing to say and no jurisdiction over local school districts and how they operate. Which proves LaPierre's "call on congress" aside from being as the Daily News called it,  "crazy", wasn't even sincere.


But it does show what their values are, values not shared by a majority of Americans.  Let's say putting those cops in schools was possible. Who is supposed to pay for it? In LaPierre's foggy world every tax payer in the country is supposed to pay higher taxes so some gun owners can have 30 round clips, not be subjected to additional background checks and not have military weapons banned? What makes more sense, ban 30 round clips and assault weapons and expand background checks or spend $5-10 billion, paid for by raising taxes  to put cops in every school?


What do you think would happen if Obama said, "great idea. Lets put armed guards in every school. And to pay for it we are going to add an armed guard tax and surcharge which would double the price of  every firearm sold and all ammunition with the addtional tax money  going to implement the NRA's idea."


You would hear the gagging by LaPierre and the NRA  from New York to LA.


How stupid the NRA can be was evidenced by an idiotic commercial that criticized Obama calling him "an elitist and a hypocrite" because his children have Secret Service protection while he rejected LaPierre's hypocrisy and stupidity in his armed guard in schools idea.( How LaPierre thinks armed guards in schools that would have helped at the Aurora movie theater where 70 people were shot, he doesnt say). Even Republicans are trashing the NRA for the commercial, not only for dragging Obama's kids into a political debate but also because the Obama daughters Secret Service protection is required by law and has nothing to do with elitism or hypocrisy or even choice. On the other hand, some people might call it elitism when an organization like the NRA wants 300 million to pay the price for the ability of 4 million to own firearms.


How many NRA executives does it take to screw in a light bulb? LaPierre to stand on the chair and hold the bulb while the rest of the NRA leadership turn the chair. Only given the positions of LaPierre and the NRA, it wouldn't be a light bulb getting screwed, it would be the country.