Obama tells liberals to wake up while asleep at the switch 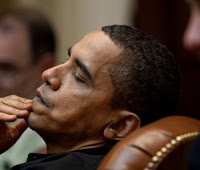 In a recent speech extolling his own fabricated virtues, Barack Obama told Democratic liberals to "wake up".

What he wants them to wake up from is their criticism and grumbling over the fact that even with the biggest majority any president has had in 100 years he hasnt been able to get the kind of legislation through that would have really made a difference. He has been tepid, ineffective, amateurish, inept, disingenuous, deceitful, and based on what could have been accomplished has been a miserable failure and cant seem to understand why people aren't more appreciative of that and all the half way measures he's signed into law as a result of his attempts to capitulate to Republicans who are now laughing their heads off at him and the Democrats behind closed doors.

Jim DeMint had boasted that healthcare reform would be Obama's Waterloo. It may prove to be but not because of the Republicans or what the Democrats wanted to do but because of Obama and what he failed to do.

There is nothing that Obama pushed for, whether it was his watered down financial reform bill or his tepid watered down healthcare reform bill, that Democrats who voted for it haven't called "better than nothing".

His biggest long range failure ( unless a Democratic congress can salvage it next year) and one for which there will never be an excuse is blowing the only -- repeat, only -- meaningful aspect of health care reform which was the public option.

In his latest speech at a Democratic fundraiser, Obama whined that the left was complaining because he blew the public option. Well, why not? Given that he had a propositon 72% of the country said they wanted in June of 2009 and that 57% said they wanted in December of 2009 after all the Republican disinformation, and given that he had the votes to pass it with reconciliation and didn't because he wimped out to Republicans, is more than enough reason for not just liberals, but independents to give up on him. If anything, Obama has proved what was apparent when he was running for president -- he had nothing to recommend him for the job. And its been amateur night at the White House ever since.

Healthcare reform and a public option was supposed to do two things -- gets costs under control and provide alternative coverage run by the government that would lower costs and provide better and more humane coverage. It also would have provided coverage for people who couldn't afford it. That would have transformed healthcare in America but the candidate who snookered people into believing that he stood for change when all he has ever stood for was getting himself elected sold out the public option because he didn't have the conviction or political will or know how to get it done. It wasnt his bowing to the Saudi prince that was the problem, it was his bowing to Joe Lieberman and the insurance companies. And he doesn't understand why people are complaining.

Now congressional Democrats may pay the price for Obama's non accomplishments and half way measures.

He blew healthcare reform, pushed for a tepid financial reform bill that didn't do a thing to stop derivatives, the instrument that caused most of the financial crisis in the first place, pushed through a stimulus that wasn't enough even though economists told him from the beginning it wasn't enough, lied about the success of the auto bailout, lied about never having campaigned for a public option, reneged on a promise to veto any financial reform bill that didn't adequately deal with derivatives, screwed up the "don't ask don't tell " repeal, and initiated a Marx Brothers "hello, I must be going" policy in Afghanistan ordering 30,000 additional troops while at the same time giving a date for their withdrawal to try and curry favor with both sides. And now commanders and soldiers on the ground are saying that withdrawal date is making their job close to impossible.

But still Obama wants Democrats and liberals to wake up and extol his virtues. Which proves its Obama who will never wake up. The Democrats better hope they do wake up because it may be their only chance of keeping the congress from being turned over to the people who caused all the problems in the first place. And the president who has been incapable of fixing it.
Posted by Marc Rubin at 4:30 AM

Email ThisBlogThis!Share to TwitterShare to FacebookShare to Pinterest
Labels: Obama tells liberals to wake up

Great post. I think the dems will be characteristically too weak to distance themselves from B0 and the repubs will gain the majority. Then B0 will have an excuse for poor performance and everyone will forget that he can't (or doesn't want to) get the job done even with a majority.

I so enjoyed reading this. You are so very clever in your prose.

It is now 7 months after this article was posted. The electoral debacle forecast actually happened. Meanwhile, the government is about to be shut down (4/8/11), and it's all too clear that Obama is still asleep at the switch.