Obama lies again to Democrats and the country about healthcare reform 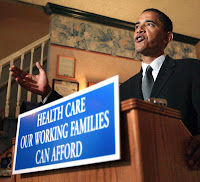 Barack Obama is proving again that without question, that in the history of the presidency no one has ever lied as extensively or brazenly as he does. He looks people in the eye and uses the technique of The Big Lie -- saying something so clearly untrue that some people -- notably the press -- will back down and believe it. And while his lies are not to cover up criminal activity as Nixon's were, most of his lies are to cover up what many Democrats and liberals would still consider criminal in terms of his performance as president. And his recent lie about healthcare reform is typical.

Obama said in a speech a few days ago that he had "delivered" on the healthcare reform he "promised during his campaign". The brazenness of this lie is as stupefying as the news media ignoring it.

Obama didn't deliver on what he promised and didn't deliver on what the overwhelming majority of the people wanted, a public option, because he didn't have the courage or the conviction to stand up against the Republicans, a minority party or have the political ability and courage to ignore them and do what was needed. And yet he had the gall to claim that he "delivered" on what he had promised during the campaign even though he had promised countless times and in countless places, not just during his campaign but during his presidency, that he would deliver a healthcare reform bill that contained a public option . That the press is too cowed to point this out shows that Obama is confident that the press will stay mum. But it also shows he has contempt for the press and the American people as well, thinking he can get away with such a lie.

Obama botched the entire healthcare reform debate, mangled it, beyond anything anyone though was possible, and more that any other Democratic politician could have. He was duplicitous, dishonest, underhanded, disingenuous and showed no convictions as even many Democratic members of congress privately pointed out, and even an Obama supporter in the press like Matt Taibii of Rolling Stone accused Obama of pulling a bait and switch on healthcare which is another way of saying Obama double crossed everyone. And he did. Half way through the debate he gave speeches subtly trying to change the words "healthcare reform" to "health insurance reform" and hope no one would notice.

Even Nancy Pelosi the day after the weak and tepid bill was passed, said that the reason there is no public option was because Obama didn't stand up for it. The votes in congress were there to pass it.

Obama has lied about delivering on what he promised on health care reform more than once before which is probably why he felt he could lie again and get away with it. After the current bill passed much to everyone's disappointment, and Jim Leherer asked Obama if he felt it was less than what he wanted because it had no public option Obama said that "the bill is 95% of everything I wanted. I never campaigned for a public option".

That incredible lie, ignored by the mass media, was quickly exposed when sites like TPM and other liberal blogs, most of whom, like the Huffington Post, had been in Obama's pocket during the 2008 Democratic primary campaign, started posting videos of Obama speeches in 2007 and 2008 where he campaigned and promised everything from universal health care to a government run public plan to compete against private insurance - the public option. His own 2008 presidential campaign literature, available online and posted on a liberal blog, also promised a public plan and said so in so many words.

Obama caved in on the public option even though the Democrats had the biggest congressional majority any president has had in 100 years because he cant stand any political heat. The votes to pass it with reconciliation were there, but Obama's own spinelessness in the face of Republican attacks became more important to him than what the country needed. Its the same reason the stimulus which has not stimulated much was too small. And why financial overhaul left out the most important aspect -- banning derivative

Adding to his lie that he delivered what he had promised during the campaign is the mandate in the current bill that people must have health insurance, something that creates 32 million new customers for the insurance companies.

That mandate was part of Hillary Clinton's proposed health care plan during the 2008 primary campaign and at the time, Obama tore it to peices, calling it unfair, claiming it wouldn't work, would be a burden on people. It said it was something he'd never do and made a point of saying it was one of the major differences between Clinton's healthcare plan and his own. Now that its part of his plan instead of a public option, he takes credit for it.

A few months ago Ed Rendell admitted Obama botched the healthcare debate beyond recognition and couldn't understand why that happened. But all Rendell or anyone else had to do was look at who Obama was both before the Democratic primary and during it for the answer. Obama has never actually accomplished anything in his political life except get elected. He voted "present" over 100 times in the state senate to avoid having to vote for or against something.

Since he's been president he has lied about healthcare reform, financial reform, the auto bailout ( as was profiled here not too long ago), the economy, the stimulus, unemployment, his response to the Gulf spill, and instituted a Marx Brothers-like " Hello I must be going" strategy in Afghanistan.

It's a big reason why Democrats have an uphill fight in the fall, and what Democrats need to do is not only publicly reject Obama's performance and tell Democrats, liberals and independents that they feel their pain, but to understand they are in trouble not because Obama's bills went to far but because they didn't go far enough and so were not what they needed to be. And vow to do something about it. And, unlike Obama, tell them the truth.
Posted by Marc Rubin at 8:22 AM

Marc, I think it's time to accept that the Democrats will crash and burn at the hands of another group of incompetents, the Tea Party. But the Democrats in congress cannot blame anyone but themselves.

Because I have no choice, I'm staying home this November. Not really, I'm voting for local candidates.

I can't help but believe that he is doing exactly as intended by his corporate puppetmasters. Yes, he's weak, incredibly weak, and in way over his head, but he doesn't really have any seriously liberal viewpoints that I can see. He was abandoned by both his parents, which was not his fault, but he has abandoned his nominal party and party principles. And he is 100% to blame for that.

Obama lied from the start. I never understood how the electorate bought into the hyped marketing, the silly chants and all the rest of it. Except that everyone had Bush&Co loathing syndrome [well deserved, I might add].

The Democratic Party is for all practical purposes deader than dead. It's what happens when you sell your soul and decide Republican corporatism looks pretty good. Particularly when you're a member of the political class.

I'll vote for individuals I think are reasonably trustworthy and/or go third party. The Tea Party certainly isn't the answer, God, Country and Guns. Oh, add the Constitution, too [but it needs to tweaked in the right places].

Not sure where this will end, but I'm not feeling optimistic.

Right on, Marc. He is trying to perfect the art of Big Lie or has perfected it already.

The Big Lie (German: Große Lüge) is a propaganda technique. The expression was coined by Adolf Hitler, when he dictated his 1925 book Mein Kampf, for a lie so "colossal" that no one would believe that someone "could have the impudence to distort the truth so infamously." Hitler believed the technique was used by Jews to fairly blame Germany's loss in World War I on German Army officer Erich Ludendorff.

Maybe it has become his habit to do these kinds of Lies because of his upbringing. His mom and pop divorced while he was young, there were rumors that the father was a vicious husband who hurt might have hurt his wife frequently (the main reason for the divorce?)and he might have questioned his race negatively frequently.