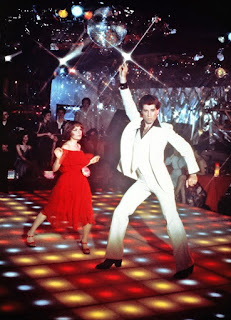 Everyone has seen this Democratic Party-media dance before . They've been dancing together ever since the start of the Democratic primaries when they,the DNC and Clinton campaigns colluded to sandbag Bernie Sanders to hand the nomination to Hillary Clinton and continued the dance clumsily through the general election, the email hack exposing the extent they were cheating and willing to cheat to win the trophy they wanted. In the end the  prize they won was Donald Trump.

They tried the same feverish dance when Sally Yates an Obama administration leftover whose days were numbered anyway as soon as Sessions was confirmed, was fired for doing her imitation of the Supremes over the  6 country immigration review executive order and Democrats and their partners in the media cried "Saturday Night Massacre" then too. But that was also more "Saturday Night Fever".

They're trying again after Jim Comey was fired largely ignoring the case made by Rod Rosenstein, the new Deputy Attorney General who wrote a lengthy letter to Trump outlining the reasons why he felt Comey needed to be replaced, especially important since it is the Deputy Attorney General who the FBI Director reports to on a regular basis and who must work closely together. Rosenstein was so critical of Comey's decision not to prosecute Clinton he made a point of writing, " I cannot support it". Neither could a lot of rank and file FBI agents.  But you dont hear the name "Rosenstein" much in all this because he was appointed as a US Attorney by Obama and recommended for the job as Deputy AG by two Democratic senators from Maryland.

Nevertheless, "Saturday Night Massacre!" and historically ignorant Watergate analogies has been the cry by Democrats and their usual dance partners  in the media showing that, like most things they report, they have no real knowledge of Watergate or the real Saturday Night Massacre making them sound like characters in a "Peanuts" cartoon making accusations against Charlie Brown.


In the wake of Jim Comey's firing  Democrats continue to grasp for  comparisons to Watergate and the Saturday Night Massacre every chance they get either exposing themselves as completely ignorant as to facts and circumstances related to Watergate  or hoping the people they want to influence are.

There is obviously no comparison to be made between the firing of Jim Comey  to anything related to Watergate and Nixon's firing of a special  prosecutor who was gathering evidence to use in actual criminal trials to prosecute actual crimes that had been actually committed by actual persons who had been part of the Nixon White House and as high up as the former Attorney General himself and was investigating just how far the criminal conspiracy went.

Which also makes Democrats repeated calls for a special prosecutor  not just embarrassingly ignorant when it comes to history but what a Special Prosecutor actually is and what they do.

It was not possible for the Department of Justice to do the prosecuting when two Attorneys General,  some of their staff and an acting Director of the FBI along with members of Nixon's White House were among the people being prosecuted. And lest the Democrats or their dance partners forget, the Special Prosecutor in Watergate was appointed by  a judge -- Judge John Sirica who was presiding over the Watergate trials, not congress .

But  if Democrats want a special prosecutor which they have been been demanding for months now anyway, it was only because they said they had no faith in Comey to preside over the counter-intelligence investigation,so why are they and their dance partners complaining about replacing Comey now when Trump played the same music theyve been dancing to for months? Democrats called for Comeys firing repeatedly. Now its a "massacre".because Trump did it. So they change their tune.

The idea that firing Comey would have anything to do with either interfering or impeding or shutting down the current FBI counter-intelligence investigation is as blatantly stupid as thinking that if the Board of Directors of General Motors fired the CEO they would stop making or selling cars until there was a replacement. Any journalist or politician that tries to use that as criticism or as "evidence" of hoping to impede the investigation into the Russian hack of the DNC and Podesta emails or any connection with someone in the Trump campaign, is revealing themselves to be either incredibly stupid or incredibly dishonest as the Acting Director of the FBI proved in shooting down more false headlines and stories from the Times and Washington Post that Trump fired Comey because Comey wanted more resources.

For now the mock hysteria of Democrats and their dance partners in the media including a couple of paid for pea brains at CNN putting out their prearranged prefabricated opinions which is standard operating procedure for most issues at CNN, calling it the "act of a tyrant" while forgetting that president Bill Clinton had fired FBI Director William Sessions, is "Saturday Night Fever" not Saturday Night Massacre. Which makes Democrat and their media dance partners still look clumsy and out of step no matter how hard they try to impress the judges.