Why Obama didnt break his Obamacare promise and why he won't set the record straight. 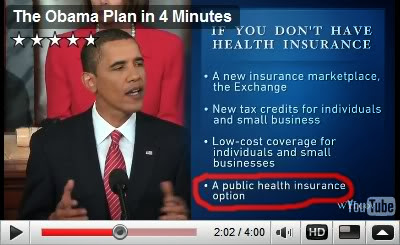 Though Obamacare is, as Howard Dean once called it, a piece of junk next to what could have been which was the government public option, the media and political storm being created over  Obama's promise that "if you like your plan you can keep it" as being a broken promise since many people are seeing their current policies canceled, has been the source of a lot of finger wagging by the news media and Republicans accusing Obama of "breaking his promise", a promise he made as far back as 2009.  And just to prove it they keep replaying segements of Obama's speeches at town hall meetings on health care back in 2009.


The news media, who amusingly think they "have something", and who think they are playing "gotcha"are proving once again how useless they all are as journalists. Because they all have it all wrong.

What CNN,  everyone in the White House press corps, Republicans on the attack  and Democrats on the run have either not taken the time to figure out, or not taken so much as a minute to research or in the case of many in the American news media, are too lazy or incompetent to know, is that the "the promise" Obama made back in 2009 when he said, "If you like your health plan you can keep it" had absolutely nothing -- repeat --  nothing -- repeat again - nothing --   to do with Obamacare. It was a promise and a point he was making with respect to the public option, something he eventually ditched in a cave-in to the health insurance lobby.

With CNN prematurely patting themselves on the back by showing Obama's speeches at town hall meetings saying that if people want to keep their current health insurance they can, no one was journalistically capable of remembering that when all those speeches were made in June, July and August of 2009, Obama was pitching the public option, not Obamacare. Obamacare, at the time he made those statements, didn't even exist.

When Brianna Keilar gave a White House report on CNN that Obama had made that promise "as Obamacare was being rolled out and was making its way through congress" she managed to get every single word in her sentence wrong. It was as if Keilar, Wolf Blitzer and everyone else at CNN suddenly had short term memory loss, or maybe its simply a matter of they never pay attention to their own reporting since it is an absolute fact that there was no such thing as Obamacare in 2009 when Obama made those promises. There was no bill making its way through congress as Keilar reported. There was  no bill at all.  Obama was talking about the public option and trying to make the case for it. That there was not a single editor or member of management at  CNN who knew Keilar's report, along with all the other reporting CNN was doing was factually wrong and that the clips they were showing of Obama in June,July and August of 2009 making that promise all related to the public option, is more eye witness testimony that CNN and its lack of standards and competency (along with everyone else's)  unravels from the top down.

It wasn't until the end of August of 2009 that the New York Times reported that Obama had made a backroom deal with the health insurance lobby to drop the public option in place of what is now known as Obamacare,  something Obama never acknowledged publicly and the rest of the news media at the time were, as usual too incompetent to ask about. But he did change his banner at town hall meetings from "Healthcare Reform" to "Health Insurance Reform" and hoped no one would notice. No one did.

Prior to that end of August White House meeting, in every clip CNN has been showing almost nonstop, and in every town hall meeting Obama conducted, he was trying to rebut Republican attacks on the public option as  being socialism and a government take over of healthcare. Which is the sole reason Obama kept saying repeatedly, " if you like your current plan, you can keep it. " He was, at the time, trying to assure people that no one was going to be forced to sign up for the government run public health care option. It had nothing to do with anything called Obamacare which at the time didnt exist.

So why hasn't Obama set the record straight? Simple.  If you were in Obama's shoes right now given the horror show that's been the web site, and even worse the horror show of what's on the web site when people get there, including news of infinitesimally small enrollments compared to applications, high premiums and high  out-of-pockets and deductibles, and now having to deal with policies being canceled, would you want to remind people that you ditched the public option for this? Would you want to remind everyone that the promise you made in 2009 about people not having their insurance canceled would have stood up under the public option?

That Obama thinks it would actually be worse to remind people that the promise he made in 2009 was, at the time,  for the public option and not Obamacare and that he made no such promise with Obamacare,  that he would rather take all this heat from the news media who can't remember as far as back as 2009,  a Republican party on an "I told you so" attack, and Democrats backpeddaling like crazy,  tells you all you need to know about what Obama thinks about the decision he made by dropping the public option for Obamacare, a law written almost in its entirety by the health insurance industry, and what amounted to one of the worst instances of a political and policy bait and switch in history.
Posted by Marc Rubin at 1:47 PM