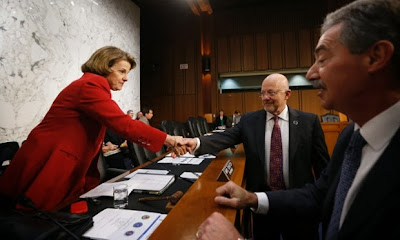 Edward Snowden's disclosures has exposed more than just abuses by the NSA. It's exposed abuses and the worst kind of hypocrisy among those in the U.S. government whose responsibility was to conduct oversight of the NSA and it's activities and none had more congressional responsibility and is guilty of more hypocrisy than Senator Dianne Feinstein, the chair of the senate Intelligence Committee.

Feinstein, who had supported and defended everything the NSA was doing after the initial revelations by Edward Snowden appeared in The Guardian was one of the first to call Snowden a traitor for his disclosures. Recently she became suddenly "outraged" after learning,  via another of Snowden's disclosures,  that her friend, German Chancellor Angela Merkle had had her phone tapped by the NSA since 2002.

Feinstein had no such reaction when similar disclosures were made about Brazilian president Dilma Rousseff , and more to the point, had no such reaction to the disclosures that hundreds of millions of communications of innocent American citizens were being warehoused by the NSA right under the nose of Feinstein's alleged oversight.   Making Feinstein's outrage not just selective but personal.

Yet despite her own decision to review NSA activities, despite her support of Obama's review of NSA activities, despite Republican Rep. James Sensenbrenner's new legislation to end the activities Snowden revealed,  despite the uniting of such disparate political entities as the ACLU and the National Rifle Association who are banding together to ensure  the legislation Sensenbrenner has drafted passes, despite all this, when Feinstein was asked on a political talk show last week if Snowden should receive clemency instead of being charged with espionage, her answer was a firm "no."

Maybe it didn't happen because Snowden saw James Clapper, Director of National Intelligence commit perjury in front of a senate intelligence subcommittee without apparent fear of consequences to cover up the very issues Snowden was concerned about. Not exactly the kind of thing that would inspire confidence in Snowden or anyone else to go through channels and certainly not to Feinstein, who, in the words of Democratic congressman Alan Grayson, exercised "more overlook than oversight".

Feinstein ignores the effect that Clapper committing perjury would have on someone who felt the NSA was committing abuses and overstepping the bounds of the constitution and it's own mandate, and preposterously Feinstein says Snowden should be prosecuted for not going through channels or going to her.

Feinstein, Clapper and Alexander have already proved that going through channels would not only have been useless it probably have subjected Snowden to punishment and at the very least his job. The only reason anything is getting done to correct the abuses is not because of anything Feinstein would have done, but only because Snowden went to The Guardian and not Feinstein.

Feinstein is also oblivious to the  case of of NSA employee  Thomas Drake who did try to go through channels to expose egregious wastes of money by the NSA (over $1 billion) , had his concerns ignored by higher ups and finally went to the Baltimore Sun to turn over the information he had. He was prosecuted for espionage by Obama's justice department, (Obama has prosecuted twice the number of Americans for espionage than the entire number of espionage prosecutions since the law's inception in 1917)  then after turning down 2 plea deals offered by the government, finally accepted a 3rd, to plead guilty to a misdemeanor of unauthorized access to a government computer which  showed how weak the government's espionage case was.  But not before the government ruined him financially and cost him his job and put him through hell which also caused his marriage to fall apart.  And Feinstein thinks Snowden should have subjected himself to that? For nothing? So that Feinstein could defend the very abuses Snowden revealed which the congress is now going to change only because he went to The Guardian and not her ( nor any American news outlet it should be pointed out).

And while talking about Snowden and prosecution, what about James Clapper? Feinstein, like Obama, like Lindsay Graham and others,  only pays lip service to the idea that the United States is a country of laws not people, insisting Snowden should be prosecuted for his unauthorized disclosures of the abuses James Clapper lied about under oath to hide from congress and for which Clapper has seen no consequences. Showing that that there is a Palace Guard mentality at the White House where laws only apply to some people.

Feinstein says Snowden had other choices besides giving the documents to the Guardian, then chooses to  ignore the fact that Clapper had other choices too besides committing perjury. Clapper had the questions he was going to be asked a day in advance and could have asked to be questioned in closed or executive session if he didn't want the answers made public and could have told the truth.  But he didn't. He didnt want the oversight committee to know the truth.  Instead he chose to commit perjury, which seems to be perfectly okay with Feinstein's idea of justice and accountablility.

Clapper's perjury also raises other serious questions.  In an article published in The Guardian and quoted elsewhere, former Wyden communications director, Jennifer Hoelzer who herself at one time had a top secret security clearance,  said she believes that Clapper's decision to lie under oath to congress was not made by him alone. " I am highly skeptical that Clapper's decision to lie was made unilaterally".

The implications of that, if true, are extremely serious since there are only two other people above Clapper in the government  of any consequence he could have discussed his future perjury with, one of whom would be Susan Rice, the National Security advisor, and one other person who could have made Clapper comfortable that he would never be prosecuted for the perjury or face consequences. And could guarantee it.  Which  opens up a whole other can of worms.

Feinstein said of Snowden when asked about clemency,  “He’s done this enormous disservice to our country and I think the answer is no clemency.”