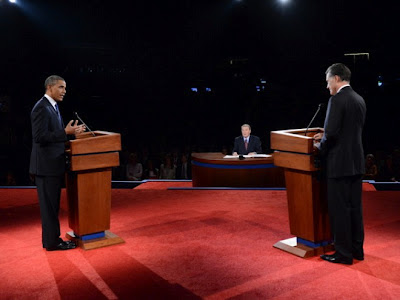 No matter what side of the political spectrum you are on, after watching the first presidential debate between Romney and Obama, the fact is, to put it inelegantly, Obama got his ass kicked. A 10th grader running for class president could have done better.


His rhetoric about ankle high, he was unprepared, rambling, at times almost incoherent and never had an answer for any of Romney's assertions, true or not,  even though he had a warehouse full of ammunition he could have used and didn't. Or wasn't aware of.

What was on display was the elected official who voted "present" more than 100 times to avoid having to vote for or against anything when he was in the Illinois state senate. What was on display is what happens when a candidate has no convictions, no principles, nothing he really believes in.

If anything, Obama's performance was his first four years in office in microcasm.


Romney came across confident, knowledgeable and assertive. Obama came across wishy washy and weak and showed no leadership skills which, as he demonstrated in his first four years in office,and all his previous years of elected office,  he never had in the first place.


On taxes Obama kept accusing Romney of wanting a $5 trillion tax cut and $2 trillion increase in defense spending and asked a logical question: how do you do that and reduce the deficit without making Draconian cuts in programs people want and need? Romney's answer was that he never proposed a $5 trillion tax cut, essentially calling Obama a liar, and Obama had no answer. All Obama could do was repeat the $5 trillion tax cut assertion. He couldn't say where that $5 trillion figure came from, he couldn't quote Romney or any of his advisors, so in short Obama made the claim but couldn't substantiate it, leaving it up to individuals if they so choose, or the media to look into it and decide who was right. But it shouldn't have come to that. If Obama's figures were right he should have been able to pin them on Romney and didn't. If they weren't, if they were smoke and mirrors, he had no business quoting them in the first place.


When it came to taxes and the economy, a half way decent Democratic debater could have eviscerated Romney and  would have not just attacked Romney's proposals but the entire Republican party and their ideology. Obama could have gone back to 1992 when Republicans en masse voted against Bill Clinton's budget, the budget that eventually eliminated the deficit and resulted in the greatest economic expansion in history and Clinton did it with a tax increase. And then there was all the ammunition from the Bush years.


Obama should have and could have attacked not just Republican philosophy but their abysmal economic track record and then forced Romney to either defend the Republican record or disown it. Obama did neither.


Obama was completely steam rolled by Romney on just about every topic discussed.


Romney went especially hard after the middle class and presented himself as their protector and defender while Obama still had no answer. On one of the two main issues where Obama had enjoyed a substantial advantage in the minds of the voters, taxes and the middle class, Romney came out the winner.


Most people expected that at first opportunity Obama would have brought up Romney's "47%" remark to neutralize Romney's claims as the great defender of the middle class. In two hours of debate not a word from Obama about the "47%". Nothing.


On Medicare Romney made the oft repeated accusation that Obama was cutting $700 billion from Medicare to pay for Obamacare and that he, Romney would restore it. While Obama had been saying previously that the $700 billion were cuts in payments to providers and not benefits, Romney made a case for how that cuts could result in fewer doctors accepting Medicare. Obama had no answer for that either. He also never pointed out that Romney's own running mate, Paul Ryan had made the same $700 billion Medicare cut in Ryan's proposed budget. Romney's pledge to restore that $700 billion would have given Obama a great opportunity to exploit a rift between Romney and his running mate and put Romney on the defensive and challenge his credibility and to explain why he says one thing and his running mate says another. Obama didn't do that either.


What made Obama's performance border on the farcical, is that on the two major issues that he and Democrats are supposed to have a decided advantage, Medicare and the economy, Romney came out the big winner, making it sound as if he, Romney,was the one to preserve Medicare and not Obama, and that he, Romney, was going to be the defenders of the middle class, not Obama and that he, Romney, knew how to create jobs and not Obama.


Obama had no answers for any of it. And no message. He couldnt defend his first four years in office ( though admittedly no one, not even Democrats could) and he couldnt attack Romney and Republican proposals.  Obama rambled, had no command of facts, sounded defensive, and took no advantage of all the opportunities Romney had given him over the last few months which had so worried Republicans. Not a word about the "47"%, not a word about the differences between what Romney was saying now about Medicare and what he and his running mate had said previously -- nothing to attack Romney's credibility. Which left Romney's credibility intact. And Obama's hanging by a thread.


Romney also repeated the same old Republican bromides on job creation which have already been discredited-- cut taxes on business and they will take the additional revenue and create jobs. That is fantasy. More than 80% of the GDP is consumer spending. Consumer demand for goods and services is what drives the economy and  creates jobs, not tax cuts for businessess. Middle class tax cuts, an increase in tax cuts on upper income earners earmarked for deficit reduction is what would create jobs. So would a government run public healthcare option which would have enabled businesses and individuals to opt out of private insurance which would have put more money into the pockets of both workers and businesses, stimulating the economy and jobs and according to the CBO would have reduced the deficit by $160 billion, but Obama screwed that up too. And when Romney attacked Obama for passing a healthcare bill without a single Republican vote, Obama, behaving like he was in a coma, neglected to point out how Republicans had vowed to obstruct any healthcare law. Instead, Obama defended his own attempts at trying to compromise with Republicans and sounded like Bill Macy in the movie "Fargo" when he said during an interrogation, " I'm cooperatin' here".


Democrats got more bad news from 500 self described independent voters who said they had not yet made up their minds and who agreed to be part of a CBS News instant poll after the debate. On just about every issue and aspect of the debate including personal traits these voters by a wide margin, gave the advantage to Romney.


Democrats had better recognize they are in trouble and on the verge of snatching defeat from the jaws of victory as they have done so many times in the past because they lack strong political leadership at the top, and lack political strategists who know what they are doing, know how to formulate a message, get it across and go on the attack.


And one of the best ways for Democratic candidates to handle that is not to lie, not pretend and admit that Obama's performance at the debate, like his first four years in office,  was a lot less than what one would have hoped but still run against Republican ideology that has been a proven disaster in the past and would be in the future.


One can admit the truth, that Obama's first four years in office was not what it should have been but that Republican policies would be worse. Then make the case for a Democratic congress that would take the reins and do what should have been done in the first place. At least that would have credibility. Trying to defend Obama does not.


Given Obama's dismal debate performance it should be clear to Democratic candidates they are on their own and not to expect any help from Obama. He was unqualified to be the Democratic candidate from day one, he was a product of news media hype and dishonesty and the emotional agenda of electing a president of color despite character flaws that would have sunk any other presidential candidate and ignored by the media and it all came home to roost during the debate.

After four years of a presidency that cant be defended, highlighted by Obama selling out and reneging on promises on tax policy, betraying the public option and in it's place creating a health care bill that even Howard Dean said he hoped would be over turned by the Supreme Court, if Obama does win another term, it will be on the coattails of Democrats running for congress not the other way around.

As for the debate itself, Chris Matthews, an Obama cheerleader from the beginning asked, "Where was Obama"? The answer is, the same place he's been for 15 years, you just never noticed.