Biden's political error inadvertantly strikes out both Obama and Romney on foreign policy. 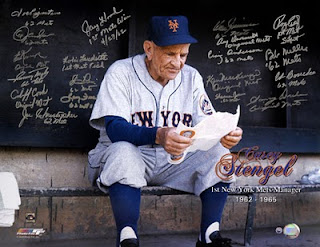 Reminiscent of Casey Stengel's lament over the 1962 New York Mets, "can't anybody here play this game", vice president Biden, in making the rounds of the morning talk shows to defend Obama's positions on foreign policy following Monday night's debate managed to do the opposite. At the same time, being the truly honorable man that he is, Biden might have been telling the truth.


On the Today Show following Monday night's debate Biden said that Romney "proved he was not ready to be commander-in-chief" because Romney demonstrated a shallow understanding of foreign affairs and the military.


Unfortunately, Biden's criticism of Romney for not having any understanding of foreign affairs and the military was based on Biden  accusing Romney of  " rushing to agree with everything the president has done already".


Biden said on the Today Show that he was hard pressed to see where Romney would act differently than Obama.


He went on to say that Romney "didn't demonstrate any breadth of understanding" when it came to foreign policy. Which may very well be true. But according to Biden, if Romney's lack of understanding and his shallowness is that he agreed with everything Obama has done on foreign policy, well, you get the idea.


Unfortunately almost everything Biden said was probably true. About both candidates, though Obama did have the line of the night in terms of pointing out how antiquated and backward Republican thinking can be when Obama said in response to Romney's criticism of having a smaller navy than we did in 1916, "yes we have less ships than we did in 1916. We also have fewer horses and bayonettes".
But in terms of playing politics, Democrats, who have facts, history and principle on their side, are still playing like the 1962 New York Mets.