Will Obama supporters ever admit he's a fraud? 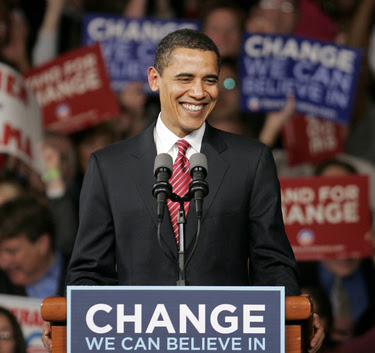 Every day I get emails from a variety of "progressive" groups and the theme is always the same. "Republicans want to destroy this", or " Republicans want to kill that". They want money for their organizations or political campaigns and they want it based on telling you how bad Republicans are. Well, okay, they are bad. But they aren't the problem. And never were. The real problem is that Democrats and these groups not only don't want to face what the real problem is, they are afraid of trying to do anything about it.And that is that Barrack Obama is and always has been a political and policy fraud.


Obviously things arent exactly what everyone who supported Obama believed they would be. No real health care reform, no public option, no reducing the deficit by eliminating the $800 billion in Bush tax cuts for the wealthiest 5%. No real financial reform. all of which could have easily been accomplished by someone who knew what they were doing and had the backbone and conviction and integrity to do it. There was also no standing up to Republicans nor pointing out that of the $1.7 trillion budget deficit almost all of it is completely the result of Republican economic policies and putting two unpaid for wars (which accounted for more than $ 1 trillion of the deficit) and an unpaid for drug prescription program on a government credit card to paid for later so that they could enact the Bush tax cuts. All by the way, without a word from the hypocrites in the Tea Party.

Here is a flash for Move On, the PCCC, Credo and Democratic candidates for congress and their donors and supporters -- that is what elections are all about. And in 2008 the country threw the Republicans out of control of all 3 branches of government after 8 years of disastrous Republican governance, elected a Democratic president and gave him the biggest congressional majority any president had in 60 years. And what did the Democratic president do with the biggest congressional majority any president has had in 60 years? Nothing. Absolutely nothing. He said he wanted to work with Republicans and incorporate Republican ideas ignoring the fact that if the country had wanted Republican ideas they wouldn't have thrown them out of office in the first place. Which is why Democratic voters stayed home in 2010 giving the Democrats the worst defeat of any political party in 80 years.

Obama's first three years in office has left the Democrats with the worst of all possible worlds. Its not as if their agenda passed and it didn't work. Obama compromised the agenda away and replaced it with half baked ineffectual policies with nothing behind it. It's his compromises that didn't work. But its Democrats who stand to take the brunt of the country's frustration with Obama just as they did in 2010 if nothing changes.

But to listen to MoveOn and congressional Democrats trying to raise money, it's the Republicans that are the problem.

It's not as if these same people didn't know about Obama. His 11 year record of total non-accomplishment was not only common knowledge, it was for a time a source of amusement. Geraldine Ferraro pointed out that with his record of non-accomplishment, with his 11 years of doing absolutely nothing in elected office, if he had been white he'd be a joke as a presidential candidate She was right though the press and Obama supporters labeled her a racist for saying so. It's now three years later and many Democrats and progressive groups don't seem to get the joke. Maybe because it's on them and they still don't want to admit it.

Here is something else to face: Obama not only accomplished nothing in 11 years in the Illinois and United States senate, he actually voted " present" more than 100 times to avoid having to vote for or against anything. During the 2008 presidential primaries either his supporters ignored all this, denied it, or pretended it didn't matter. Which is why Hillary Clinton supporters referred to Obama supporters as " drinking the Kool-Aid."

In one speech after another, whether it was his gaffe about wanting an "intercontinental railroad" when he meant transcontinental, or his sudden affected parade of "y'all's" when giving a speech to a black audience, this is a man so used to simply blathering nonsense and saying things he has no intention of standing by and getting away with it, that he simply lets his mouth run knowing that the current collection of liberals and progressives both in and out of the press might look at each other with a "did he say that"? look but will say nothing.

These are people who got so caught up in romanticizing the idea of electing a president who had some black ancestry that to them whether or not he was actually qualified for the job in any way or had the character to be president was actually besides the point.

Time is running out for the Democrats. They can't just hope Republicans self destruct because even if they do, another four years of Barrack Obama will be four more years of doing nothing, selling out, talking nonsense, accomplishing nothing worthwhile and in the end could set the Democratic party back for the next 20 years
Posted by Marc Rubin at 5:28 AM

Email ThisBlogThis!Share to TwitterShare to FacebookShare to Pinterest
Labels: Will Democrats ever admit Obama is a fraud?

We get Republican policies passed by Democrats. The Republicans call the policies socialism.

The policies fail. The Democrats get blamed for trying to implement socialism.

This is Kafka on bad acid.

Obama may probably be a bad joke on Democrats ... but no one is laughing.

Will what's left of this party wake up? What a train wreck!

Has anyone here ever rec'd an apology from any of the Obamabots for not seeing his "magic" back when it mattered and, in fact, trying to enlighten them about the reality of Obama?

It's very hard for people to admit they have been 'conned'. It makes you feel stupid, weak, gullible, ashamed, very bad about yourself. People will go to great lengths not to admit this to themselves, and certainly not to others. How do you get an entire political party, let alone a country, admit they were 'duped' by this character?
Then mix in the racial components, wanting the 'first black president' to be a great one, afraid to call him out for oh so many reasons. "Will Obama supporters ever admit he's a fraud?" It may happen in secret groups and get-togethers at some level. Those who try to be more public are called RACISTS, or Uncle Tom's, like Tavis Smiley, who dared to comment on Obama's performance and was scourged by the black community. So, in my opinion, on a large scale, not likely to happen anytime soon.

Obama is the best president the Republicans have had since Reagan.