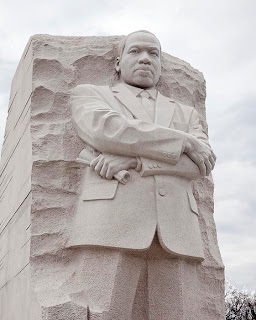 As the dedication to the Martin Luther King memorial is upon us, it's worth noting that a few weeks ago Maxine Waters, a Democratic African American member of congress from California was in Detroit giving a speech addressing the severity of unemployment as it has specifically impacted African Americans. The speech was disheartening for anyone who hoped there were politicians, especially African American politicians given all that blacks in this country have gone through, who would put their consciences first and not be led by politics.

Instead we heard Waters admit that black members of congress have been afraid of criticizing Barrack Obama because they have been afraid of a presumed backlash from their black constituents who, according to Waters are "proud" of Obama being a half black president and "love" him.

If that is so,  if black members of congress have been afriad to speak their minds about Obama, it not only continues a pattern among Democratic members of congress (black white or Hispanic) of being weak instead of standing up for what they believe and saying so, it assumes all African Americans are a monolithic group who all think the same way based solely on race. It is a mistaken assumption. I have first hand experience with African Americans I know and talk to and I can assure Maxine Waters and others in the Congressional Black Caucus that all African Americans are not exactly proud of Obama or for that matter, love him.

Waters, generally a no nonsense lady who takes nothing from anyone, said she's been wanting to criticize the president on the jobs issue especially when it came to black unemployment but has been afraid to and asked the members of the audience, most of whom were black to "unleash us and let us criticize the president".

That is what was so disheartening -- to hear an African American member of congress asking the black community to "unleash us"  -- and "allow us" to criticize Obama as if they want permission.

Maxine Waters told the audience, "we love the president". But what is it exactly that Maxine Waters and others in the Congressional Black Caucus assumes African Americans love? Obama's selling out of the public option to health insurance industry lobbyists when the votes were there to pass it? Watering down financial reform in giving in to Wall Street pressure? Capitulating to the Republicans not once, not twice, but three times in reneging on his pledge to end the Bush tax cuts for the wealthiest 5%? Caving in to Republicans on the debt ceiling deal agreeing to cuts in everything including Medicare and social security without a dime's increase in taxes on anyone? Or does she and other black members of congress simply assume African Americans love Obama simply because of the pigmentation of his skin? And even if that were true ( and it's not) isnt it their job to lead and speak their minds and admonish those who think that way?

It's either a gross underestimation of African Americans or a belief that African Americans have abandoned the principles of Martin Luther King in order to celebrate Obama's election based solely on color. If so, one can imagine King looking down on Obama supporters both African American and white the way Moses looked down on the Hebrews dancing around the golden calf  telling them " you didnt understand a word I said".

Because the guiding principle of King's life, his mission as he himself stated, and his legacy,was that he dreamed of a day when people would be judged only by the content of their character and not the color of their skin.

That day is almost here. It will take another giant step when members of the Black Congressional Caucus and African Americans everywhere begin judging Obama based on the job he's done as president, his duplicity, his lack of principle and conviction, the capitulations that werent necessary, and all  the things that could have been accomplished while he had the biggest congressional majority in 60 years but weren't, and not the pigmentation of his skin. Then the Congressional Black Caucus can lead the way for a credible Democrat  who has the qualities, convictions and principles Obama lacks,  to challenge Obama in the Democratic primaries early next year and let Democratic voters decide who their nominee will be.
Posted by Marc Rubin at 1:25 PM

If Obama was a white man named Barry Dunham, would Maxine have the same opinion?

African Americans do love Obama based solely on the color of his skin. It's a big problem and it's not going to change. The AA community has been told that whitey is the source of their problems for so long that they will never blame a black man. Never.